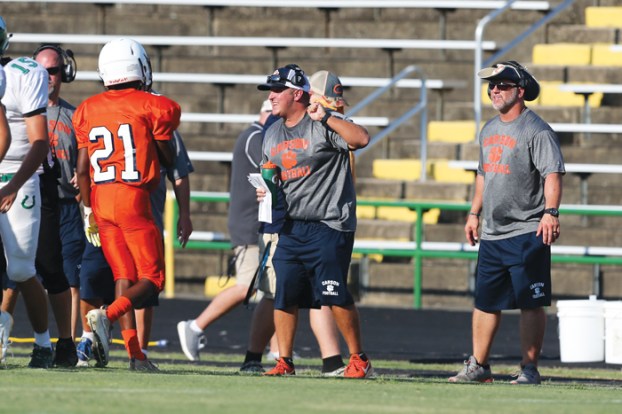 New Carson head coach Daniel Crosby, center, gives his Cougars directions from the sidelines against West Stanly, during the Jamboree. ...James Sipes for the Salisbury Post. 8/16/2019 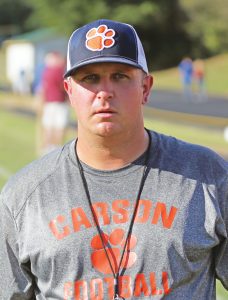 SPENCER — Daniel Crosby is officially on the clock at Carson.

The first-year head football coach hit the ground running Friday night at North Rowan, where the re-tooling Cougars were outplayed by West Stanly in the first of six Rowan County Jamboree scrimmages.

“It’s never-ending. You know what I mean?” said the 32-year old Crosby, the South Rowan and Catawba graduate who replaced Joe Pinyan six months ago. “It’s constant. This job is 24 hours a day. I think my wife realizes it more than me. It’s one thing after another — emails, phone calls, issues at school. They’re all good things, but it’s just non-stop.”

Crosby nonetheless comes across as a caring, extroverted man with optimism coursing through his veins — something he’ll rely on in the brawny North Piedmont Conference. He takes the reins of a team that lost eight of its last nine games and sat out the 2018 playoffs. Carson needs more than a routine tune-up and the former linebacker seems poised to handle the workload.

“He’s a young guy with a lot of energy,” said longtime Carson assistant Barry Mitchem. “When we first started practicing, I had trouble keeping up with him. But this is what Carson needs. We need energy and he brings it.”

Crosby arrives with an impressive resume. An all-county selection in football and baseball before graduating from South in 2005, he was a linebackers coach at Cox Mill last season and previously worked as defensive coordinator for Central Cabarrus.

“I know defense and I’ve been fortunate to work with some great coaches — Donnie Kiefer at Central and Craig Stewart at Cox Mill,” he noted. “Both were great teachers. I’m trying to take things that they’ve done and mold my own style.”

Now Crosby gets to apply his own signature. Carson senior running back Hunter Courtney believes Crosby is already an insightful coach and on his way to becoming an elite one.

“He’s been great so far,” Courtney gushed. “All about football. He has a way of explaining and showing you what you need to do. He’s got that work ethic to make you push a little harder, but he loves you at the same time. Going forward, he’ll be good for this program.”

“He’s got the team headed in the right direction.” he said. “He’s pushy and works us hard, but not in a mean, in-your-face way.”

“Oh, he’ll get on you if you make mistakes,” added Mitchem. “Then he’ll show you how to correct them. Everything he does, he does in a positive way.”

Of course, Crosby understands his recipe for success may take some time to brew.

“It all starts with a running game,” he said. “Our focus is to make sure we’re doing things right and getting better each day. We feel we’ve got good support from the community, the parents and the administration. We’re gonna build this thing from the ground up.”