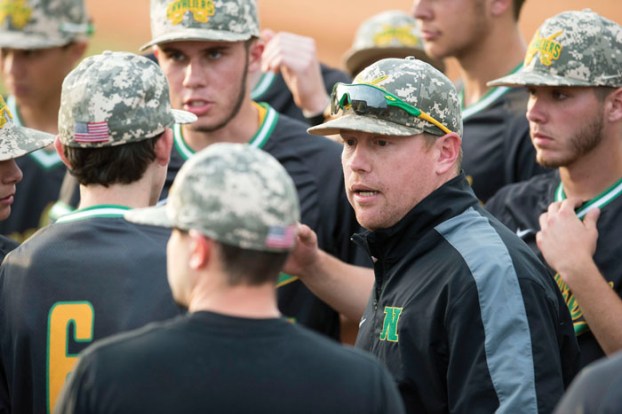 Rimer enjoying another summer of baseball 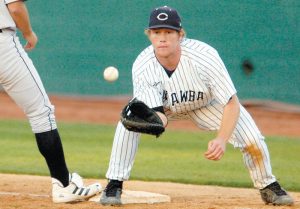 Jon C. Lakey file photo/Salisbury Post …
Aaron Rimer, during his playing days at Catawba College. He is playing first base in this 2005 game against Carson-Newman. Rimer is an assistant coach this summer with Wilmington’s state championship American Legion team.

Rimer was the slugging right fielder on what many believe was the strongest team in Rowan County American Legion history in 2002.  Three were draft picks. A bunch of them played Division I. Three more, including Rimer,  starred on strong Catawba College teams.

Rowan won 15 straight to start the 2002 season, lost 2-1 on June 11 at Mooresville, and then won 28 in a row, a surge of dominance that carried Rowan through the Area III playoffs, through the state championship tournament at Newman Park, and then to three wins in the Southeast Regional in Shelby. Those three victories in regional pool play advanced Rowan to a one-and-done regional semifinal against Dothan, Alabama. Rowan fell 3-2 to Dothan a blazing afternoon, and that was the end of the line. Rowan was 43-2 and filled a few pages in the record books, but it was over.

“Unfortunate end to a great season,” Rimer said, wincing at the memory. “I still believe if it’s double elimination and not pool play, we win that regional and maybe we win the whole thing — we had the team to do it — but it wasn’t meant to be. The heat, the schedule, the breaks, a lot of things lined up against us in that regional.”

Rimer, who also was a standout wrestler, put up an exceptional baseball career locally for North Rowan High, Rowan Legion (1999-2002) and Catawba College (2003-06). He scored 376 runs for those three programs, drove in 337 runs and belted 56 homers. He hit two grand slams for the Catawba Indians and made a pair of All-South Atlantic Conference teams.

Rimer also had some success as North Rowan’s head baseball coach, a six-year stint (2011-16) that was bookended by conference championships in his first and last seasons. He headed to Topsail High and the beach after that. Topsail only lasted a year. Sixteen forfeits for an ineligible player cost Topsail a playoff spot and Rimer his job. Officially, 17-6 became 1-22.

Rimer, an EC teacher when he’s not on a ball field, has moved on stoically from those unusual circumstances, with his love of the game undiminished. He found employment at Wilmington’s New Hanover High, volunteered his services as an assistant coach and was along for the ride as New Hanover went 28-2 for head coach Richard Foy and beat Marvin Ridge for its second straight 3A state championship.

“It was good just to be out there joking around with the players and coaches and having a good time with baseball again,” Rimer said. “It started out with me just helping out a couple of times a week, throwing a little BP, hitting fungoes, but it turned in to a lot more.  It was hard to get away after a while, and I started showing up every practice and every game. People ask me if it’s hard being an assistant after being a head coach, but it’s definitely not. You’ve got all of the perks, all of the good stuff, without any of the problems. As an assistant, you get to be the ‘good cop’ all the time. I’ve got shorts on most of the time and one of the things (Rimer’s high school coach) Bill Kesler taught me was that any time you get to wear shorts, it’s a pretty good gig.”

“Head coach Scott Sandlin does a great job with the pitchers, and the assistants work with the hitters and the defense,” Rimer said. “It’s a pretty laid-back atmosphere, but there’s a culture of winning here. When you’ve got those things working together you can do some great stuff.”

Rimer’s strength has always been his ability to relate to players, especially the mental side of the game. He has some serious talent to work with. Wilmington (23-2) has four players back from colleges, including catcher Matt Suggs, who started some games for UNC Wilmington.

“Our biggest competition for Legion players here is actually the beach,” Rimer said. “Post 10 doesn’t have the big travel ball programs to contend with, and most of the kids here really want to play Legion ball. I’d say we’ve got 15 of the best 18 kids in Wilmington on our team. We’re very good, but we could have been unbelievably good. (Lefty pitcher) Blake Walston had planned to play Legion ball, but he was a first-round draft pick by the Arizona Diamondbacks and he signed for a lot of money. Kyle Smith (a 36th-round draft pick by the Diamondbacks) didn’t sign, but UNC wanted him to report early to summer school, so we also don’t have him.”

Returning to Cherryville and western North Carolina for the state tournament was an exhilarating experience for Rimer.

“In the east, there’s a high level of play in Legion, but you don’t have the passionate fan bases like you have at Rowan County, Cherryville and some of the towns in the west,” Rimer said. “We played Cherryville in a night game in the semifinals, and it was an eye-opening experience for our guys to play in a packed house and to play in front of a raucous crowd that was all-in. Our guys loved it. They thrived in that environment.”

Wilmington took control early and held off a late Cherryville rally to win 14-12. Then Wilmington won 11-5 in the championship game against Fuquay-Varina, a team that had edged Wilmington in pool play.

Infielders Jac Croom, who signed with UNC Wilmington, and Max Hildreth, who is on the team at the University of Memphis, were named co-MVPs.

“Five games in five days with pitch-count rules we have now and with an 18-man roster is tough, but we got through it,” Rimer said. “Coach Sandlin could probably be elected governor right now.”

Next for Wilmington, which also has Catawba College pitcher Alex Holland on the roster, is the Mid-Atlantic Regional hosted by Randolph County at McCrary Park.

Randolph and Wilmington will be seeing a new group of opponents this time —  state champs from locales such as Maryland, New Jersey and New York.

“Someone asked me how I thought we could do in the Mid-Atlantic Regional, and I was like,’Mid-Atlantic? What are you talking about?'” Rimer said. “I didn’t know they’d restructured the regionals, but we’ll be OK. The regional is double elimination, and I love that. Give me double elimination format over pool play anytime. We’ll just go play and see what happens.”

Wilmington plays the 4:30 p.m. game on Wednesday at McCrary Park against Funkstown, the Maryland champs.

Randolph County takes on the New York champs, Hamburg, in the 7:30 p.m. game.

By Dennis Davidson dennis.davidson@salisburypost.com SALISBURY — It’s not often that you get advice from someone who has been inducted into... read more