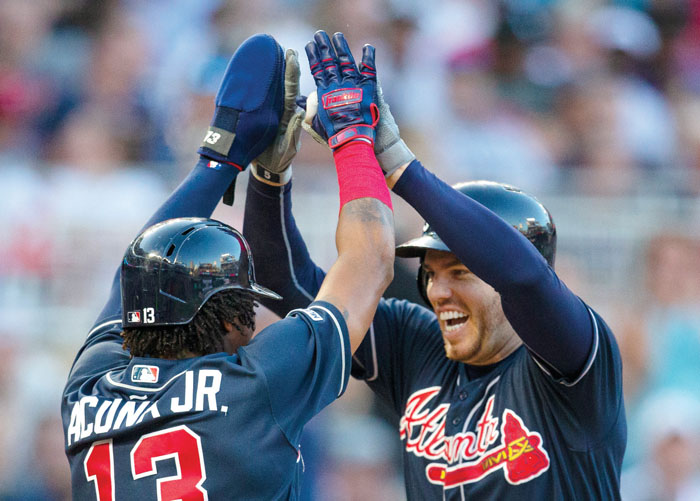 Atlanta Braves' Freddie Freeman, right, is congratulated by Atlanta Braves Ronald Acuna Jr. (13) after hitting a three-run home run in against the Minnesota Twins in the third inning during a baseball game Tuesday, Aug. 6, 2019 in Minneapolis. (AP Photo/Andy Clayton- King)

By TYLER MASON Associated Press
MINNEAPOLIS (AP) — Ronald Acuña Jr. and Freddie Freeman hit first-pitch homers off Minnesota ace Jose Berríos and the Atlanta Braves routed the Twins 12-7 Tuesday night.
The first three batters in Atlanta’s lineup — Acuña, Ozzie Albies and Freeman — combined to go 10 for 16 with nine runs and eight RBIs. Acuña scored four runs and Freeman drove in four.
Acuña sent the first pitch by Berríos into deep center field for his sixth leadoff homer of the season and the 14th of his career.
Freeman made it 4-0 when he hit Berrios’ first offering for a three-run shot in the fourth inning.
It was one of the worst starts of Berríos’ career. He allowed a career-high nine runs in the loss and slipped to 10-6. His bad night got worse in the sixth inning when he balked in a run. Albies hit an RBI triple later in the inning that chased Berrios.
Braves righty Mike Foltynewicz (3-5) returned to the majors after spending the last month with Triple-A Gwinnett. An All-Star last year, Foltynewicz posted a 6.37 ERA in 11 starts before getting demoted to the minors.
Foltynewicz allowed just two hits through five innings but was tagged for three runs, including two homers, in the sixth. By that point, the Braves had built the right-hander an 11-0 lead.
Minnesota’s Nelson Cruz hit his 31st and 32nd home runs of the season, homering in the sixth and seventh innings. He has six multi-homer games this year, tying Harmon Killebrew in Twins’ history for the most in a season.
TRAINER’S ROOM
Braves: CF Ender Inciarte was back in the lineup Tuesday after leaving Monday’s game with left quadriceps tightness. … The Braves still don’t have a return date for SS Dansby Swanson (left foot contusion), manager Brian Snitker said Tuesday. “As soon as he can get back out there and run the bases and things like that, then we’ll have an idea of when we’re looking at him going to play in a game.”
Twins: Twins manager Rocco Baldelli said OF Lamonte Wade and INF Willians Astudillo could both soon begin rehab assignments in Fort Myers, Florida. Wade dislocated his thumb in early July and hasn’t played since July 6. Astudillo hasn’t played since June 26, due to a strained oblique.
UP NEXT
Braves: LHP Max Fried has won three straight starts and looks to pick up his 13th win of the season. He won his only other interleague start this year, in April against Cleveland.
Twins: LHP Martin Perez will look to get back on track after allowing five runs in five innings in his last start against Kansas City. Perez has earned just one win in his last 11 outings.
___
More AP MLB: https://apnews.com/MLB and https://twitter.com/AP_Sports