Golf: Maria Fassi ready to be a star 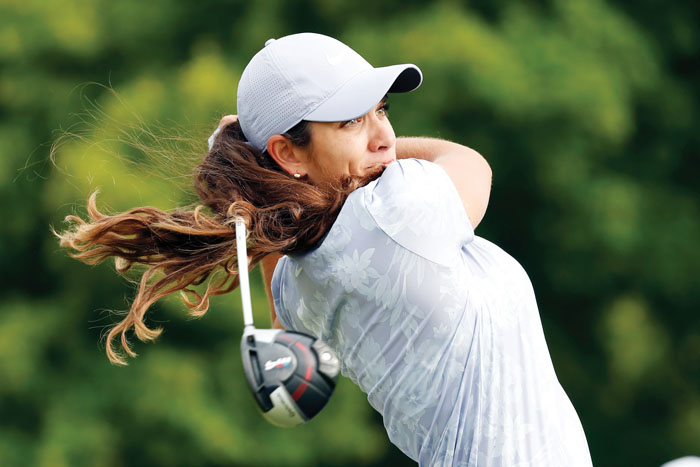 Maria Fassi, of Mexico, hits off the 10th tee during the first round of the KPMG Women's PGA Championship golf tournament, Thursday, June 20, 2019, in Chaska, Minn. (AP Photo/Charlie Neibergall)

They lived near the Club de Golf in Pachuca, about an hour north of Mexico City, and their mother wanted them active in as many sports as possible. Lorena Ochoa was just starting her rise to No. 1 in the world. Even so, golf was never a priority in soccer-mad Mexico.

“I don’t think it’s a sport a kid would say, ‘Hey, Dad, I want to play golf,’” Fassi said. “We lived at a golf course in Pachuca, nine holes. I would go with my brothers to watch them hit. From there, the head pro says, ‘You come here, but you never hit.’ So I started swinging at it. And I really liked it.”

And now the golf world is watching her, curious what her dynamic swing and personality can do for the LPGA Tour.

Suzy Whaley, the president of the PGA of America, played with Fassi in the pro-am for the KPMG Women’s PGA Championship and declared her to be “the next superstar of the LPGA.”

LPGA commissioner Mike Whan made it a point to introduce himself to the 21-year-old rookie on the range at Hazeltine because, as he told her, “I’ve never heard more people talk more about one player than you.”

Such hype requires caution because of so many others who couldn’t miss until no one really missed them when they were no longer there.

The expectations can be unnerving. Fassi embraces them.

Whan heard about Fassi a few years ago. Most casual golf fans probably would not have known much about her until they saw Fassi thrashing tee shots — she often picks up the tee while the ball is still climbing — during the final round of the Augusta National Women’s Amateur.

She was runner-up that day to close friend Jennifer Kupcho, and a month later ended her four years at Arkansas by winning the NCAA title.

Fassi, who earned her LPGA Tour card in December and deferred membership until she was done with college, is playing her fourth tournament this week close to her college home at the Walmart NW Arkansas Championship.

She made her pro debut with a 68-70 weekend at the U.S. Women’s Open to tie for 12th. She was slowed by her middle two rounds in the Women’s PGA and tied for 48th. Such is her potential that she was put in the same group as Women’s Open champion Jeungeun Lee6 and Canadian star Brooke Henderson at Hazeltine.

There is no doubting the appeal, even without polish that comes with time.

Fassi smashed one drive on the par-5 15th at Hazeltine that had fans in her gallery curious how far it went. The volunteer charting the tee shots heard them and gave them the number — 321 yards. Instead of playing to the fat of the green, however, Fassi went at the flag and came up a few yards short, into a bunker, leaving little green between her and the flag. She made par.

She’ll learn. For now, she entertains.

The swing essentially is hers, with refinement over the years.

“When I started playing, the first guy that taught me how to play in Pachuca, he let my swing be my swing,” Fassi said. “From there, with every coach I worked, it was working around that. I had fast hips. Nobody wanted to touch that because … I didn’t know back then, but it was a good thing.”

On her bag is Gary Matthews, a veteran caddie who has worked for Sergio Garcia, Anthony Kim, Lydia Ko and most recently Charl Schwartzel until a wrist injury ended the former Masters champion’s season. Fassi reminds him of Tiger Woods early in his career because his power was captivating, but it took him a few years to dial in his wedges.

Fassi already stands out in one aspect — she has a college degree in sports management. She wanted to go to college to learn and improve and figured she would stay a year. And after that one year at Arkansas, she didn’t want to leave.

She loved her teammates and her coaches. She went to more Razorbacks basketball games than football games (“I like football, but they take so long,” she said).

She had tailgate parties with other Arkansas athletes. She learned how to take care of herself.

And now she’s ready for the big leagues, and the enormous expectations that follow. Fassi is bold in the way she plays and thinks. She doesn’t look at herself as a star, but she doesn’t shy away from the chatter.

On her wrist is a bracelet with the words, “One Day Closer.”

Closer to what? To everything.

“It’s just it’s a reminder for me to stay present and I’m getting there,” she said.