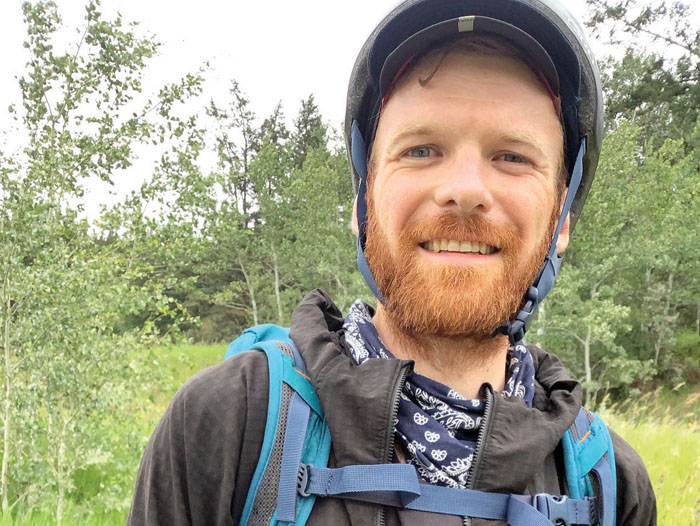 Julien Braghieri of Toronto was the highlight of Freeze’s ride on Thursday. Photo by David Freeze, for the Salisbury Post.

Wednesday was plenty windy itself, and the weather forecasters called for an even gustier wind straight out of the north Thursday.

If the forecast came true, that wind would be a direct headwind, building in intensity all day. I was slow to get going, and by midmorning Thursday, wind was the biggest factor of the day. Early on, I climbed for nearly 9 miles out of Williams Lake, Canada. Part of that is fair because the entrance to the city is 6 miles downhill.

I usually get up at 5 a.m. and am on the road by 6 a.m. More communication issues had occurred, and I stopped to see if McDonald’s Wi-Fi could fix my iPhone so that it could send emails. On Wednesday night, it would not. But by midmorning, the phone was working again. And it worked all day, even demonstrating the ability to email a photo.

Out of Williams Lake, I pedaled north as the wind started to build. I was averaging about 4 mph and was mighty happen to reach McLeese Lake, a sort of resort and a very small town. I stopped at the general store/post office just to check it out and bought a few things.

Postmaster Barry Johnson came out to ask about my trip and gave me a little insight on the afternoon’s pedaling outlook. Barry also told me about a guy who walks from Penticton, British Columbia, to Alaska every couple of years. We figured out that my pace was going to have to be pretty stout to make it to Anchorage by July 12, something that was already weighing on my mind.

All of Thursday’s ride was on B.C. 97, which is coming to an end soon.

The afternoon part of the ride included meeting Julien Braghieri, from Toronto. We met as we headed in opposite directions. Sometimes, I really enjoy the people I meet on the road, and he was one of them. Julien just became a Canadian citizen last year and was riding across Canada to celebrate it.

His infectious personality was fun as we talked about bears. Julien has seen 15 and said grizzlies can be huge while pointing at his bear spray. Next, we talked about headwind and tailwind days. Julien had a bunch of headwind days early on his trip, but Thursday was my day for that. With wind blowing from 40 to 60 kilometers an hour in the afternoon, Julien didn’t have to work too hard as he hoped to push to 100 Mile House, where I had stayed previously.

We wished each other safe travels as the conversation really lifted my spirits.

I battled for all I was worth to get 78 miles Thursday, and my legs are like jello as I write this. I’m not too far from a shower and the bed, desperately needing more sleep than I have been getting. Barry at McLeese Lake told me that the route west on B.C. 16, starting Sunday in Prince George will be less hilly. That was music for my ears.

My feet are up right now and they feel better that way.

I plan to get the bear spray in the next day or so. Also, the road’s shoulder has been usually in good shape on U.S. and B.C. 97, but good chunks of it are breaking up now that we are farther north.

At least once Thursday, I had to ride on the crushed pavement for a while but it didn’t matter because the wind crushed my speed. One photo of a 100-kph speed sign demonstrated the power of the wind, as the sign was nearly sideways. I also discovered butter tarts today. They are very good.

I stayed in the Airport Inn and RV Park in the city of Quesnel, Canada, Thursday night. I suspect there will be more hills and wind Friday. Keep reading, keep praying, and I will do my darndest to keep riding.