An appreciation: French Open bids adieu to its ‘Bullring’ 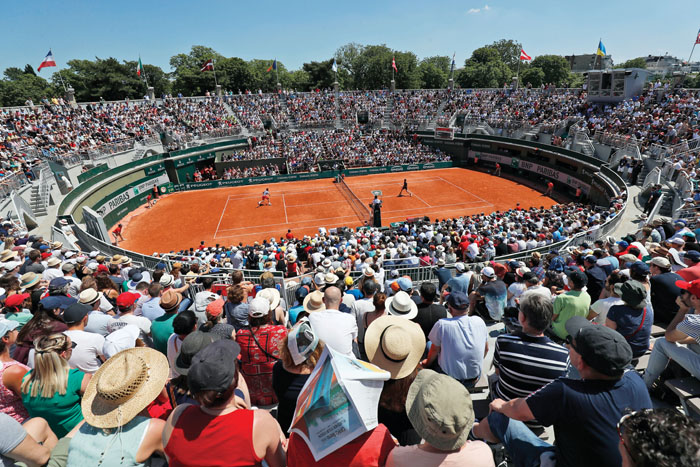 In this Saturday, June 1, 2019, image, spectators watch a tennis match at court 1 during third round match of the French Open tennis tournament at the Roland Garros stadium in Paris. When the French Open ends, its Court No. 1 will bid adieu, too, demolished to make way for a garden at Roland Garros. (AP Photo/Pavel Golovkin)

PARIS (AP) — When the French Open ends, its Court No. 1 will bid adieu, too, demolished to make way for a grassy gathering place at Roland Garros.

In a sign of the times, the arena’s final event Sunday will not be a tennis match, but an esports competition.

Court No. 1 is famous for its concrete oval — prompting, among English-speakers, the nickname “Bullring” — and its intimate dimensions, with seating for fewer than 4,000. Spectators cram wherever they can, sitting on staircases or standing in aisles.

“You feel everyone on top of you. You don’t have much space,” said Madison Keys, a semifinalist at Roland Garros last year and into the quarterfinals so far this year. “But I actually like that. It’s really good energy. I’ll be sad to see it go.”

Me, too. More than the shape or size, though, I’ll miss the place’s sounds, which made watching, and listening to, a match there unique, especially from the courtside media seats.

Players’ inhales and exhales. Sighs. Swear words. (So many swear words.) The scrape of sneakers’ grooved soles against the court’s crushed red brick. The twang of a racket’s strings against a tennis ball’s fuzz. The foot stomp accompanying a volley. The slap of a ball against the white net tape. The clicks from the cameras of professional photographers whose lens hoods peered through squares cut from the green wall behind a baseline.

The “Sorry!” just before an errant server’s toss was caught instead of struck. The “No!” that let you realize, as soon as a player did, a shot would land out. The “Merci!” to a ballkid handing over a towel between points. The two-note wail of a Parisian siren — distinct from the whirl of a U.S. siren — when an emergency vehicle sped past on an adjacent street.

Reporters and spectators were not the only ones who got the chance to eavesdrop, of course. Players could hear everything going on in the stands. Often, more than they wanted to.

One example: During a third-round match in 2006 between James Blake of the U.S. and a 19-year-old Gael Monfils of France, the locals kept giving the American a hard time. They yelled when Blake volleyed or before his second serves.

When Monfils put one shot near a line, someone in the front row said something to Blake. Instead of letting it go, Blake motioned for the guy to come see for himself.

Hard to believe, maybe, but the heckler did just that, hopping over the short wall and ambling right out there onto the court to inspect the mark .

“I wish I would have won that match, but it was still a fun atmosphere,” Blake recalled this week. “I love partisan crowds.”

The “Bullring” joins other cozy Grand Slam courts razed in recent years. The difference: The U.S. Open’s Grandstand and Wimbledon’s No. 2 Court (known as “The Graveyard of Champions,” because of notable upsets, including George Bastl over Pete Sampras, and Jill Craybas over Serena Williams) were reimagined and reconstructed.

The “Bullring” won’t return, supplanted by 5,290-capacity Court Simonne-Mathieu, which is surrounded by greenhouses.

All part of a renovation that, in 2020, is expected to finally — mon dieu! — usher the French Open into modernity with a retractable roof at the main stadium, Court Philippe Chatrier. That way, the tournament can avoid total washouts like Wednesday’s.

PARIS (AP) — The second full-day washout at the French Open since 2000 made a mess of the schedule Wednesday and raised the possibility that the Grand Slam tournament will not finish on time.

Tournament director Guy Forget said there is a chance that the women’s singles final could be delayed from Saturday to Sunday.

“It’s not what we hope,” Forget said, “but if we have no other choice, then that’s what we will do.”

Roland Garros is the only Grand Slam site without a covered court; a retractable roof is expected to be added to the main stadium before next year’s tournament at the facility in western Paris.

As things stand now, with the last two women’s quarterfinals — defending champion Simona Halep of Romania vs. 17-year-old Amanda Anisimova of the U.S., and No. 8 Ash Barty of Australia vs. No. 14 Madison Keys of the U.S. — moved from Wednesday to Thursday, whoever emerges from that half of the draw could end up playing on three consecutive days.

The semifinals that were supposed to be Thursday are now scheduled for Friday. But, as Forget noted, while Thursday’s forecast looks OK, Friday’s calls for more showers.

“Friday,” he said, “is kind of complicated.”

That would mean the women’s semifinals could end up on Saturday.

Also moved from Wednesday to Thursday were the last two men’s quarterfinals: No. 1 Novak Djokovic of Serbia, who is attempting to win a fourth consecutive Grand Slam title, against No. 5 Alexander Zverev of Germany, and No. 4 Dominic Thiem of Austria vs. No. 10 Karen Khachanov of Russia.

One semifinal in each singles draw already was set Tuesday, so those players can sit back, relax and prepare. On the men’s side, Rafael Nadal faces Roger Federer, meeting Friday for sixth time at Roland Garros and 39th time overall. They own a combined 37 Grand Slam titles.

“The one,” Forget called it, “that a lot of people are waiting for, of course.”

On the women’s side, it’s No. 26 Johanna Konta of Britain against unseeded 19-year-old Marketa Vondrousova of the Czech Republic. Neither has reached a major final.

In 2012, the men’s final between Nadal and Djokovic began on Sunday but was suspended in the fourth set and resumed Monday. That was the first time since 1973 that the clay-court major tournament lasted past its originally scheduled final Sunday.

“When we have uncertain weather, of course, it’s very hard to predict scheduling,” Forget said. “But we have to always study the worse-case scenario, knowing that ideally we want to try to finish on Sunday.”

The “Bullring” was the site of Rafael Nadal’s French Open debut on May 23, 2005, a 6-1, 7-6 (4), 6-1 victory over Lars Burgsmuller. Roger Federer won a match there in 2001, before he started accumulating major trophies. John McEnroe beat a 16-year-old Michael Chang there in 1988, a year before Chang would become the youngest men’s singles champion at any Grand Slam tournament.

“The noise echoes in there. Usually, the court’s full: 99 percent of the time there, we played to packed houses, no matter what round it was,” said Mike Bryan, who teamed with twin brother Bob to win two French Open doubles titles. “Sometimes for the final, you’re in the main stadium, and it’s only a third full, and you just hear a smattering of claps.”

Maybe I’ll long for Court No. 1, which sat in the shadow of Chatrier, because it felt like a relic of a bygone age.

Or maybe I’m like the child in Gerard Manley Hopkins’ poem “Spring and Fall,” mourning something other than the court itself.

After all, in the scheme of things, the “Bullring” is not that old, is it?

It hosted its first match in 1980. That makes it a decade younger than me.

Howard Fendrich has covered Grand Slam tennis for The Associated Press since 2000. This is his 17th French Open. You can write to him at hfendrich@ap.org or http://twitter.com/HowardFendrich