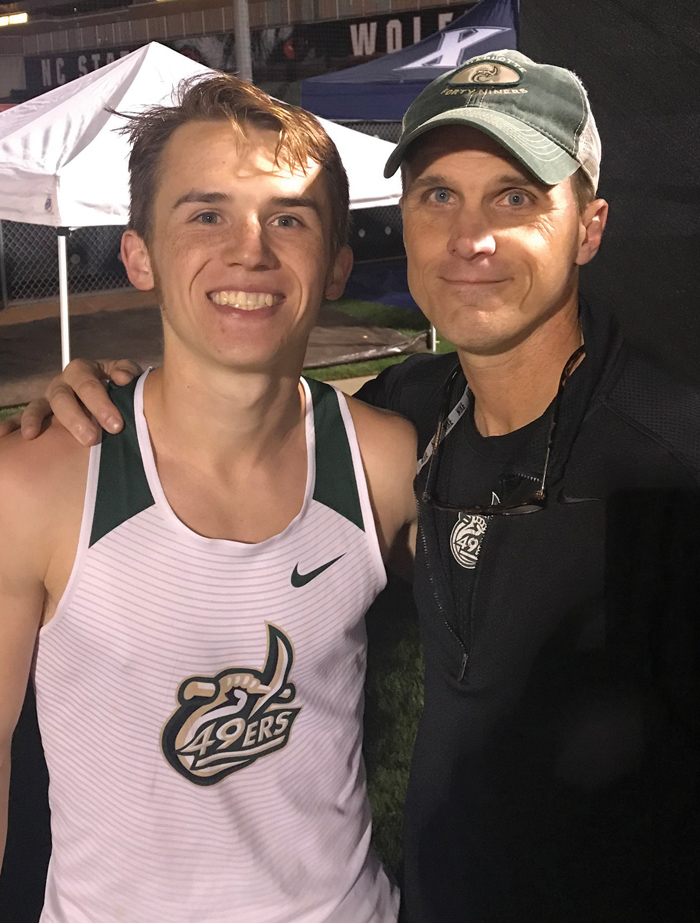 Is Zach Marchinko on the way to becoming Rowan’s best ever runner?

It isn’t often that I read something about running in the Post that makes me say, “Wow!” That certainly happened when I read about Zach Marchinko’s sizzling 29 minute and 47 second 10K time for UNCC at the Raleigh Relays recently. Breaking the 30 minute barrier doesn’t happen often, and to my knowledge, it’s the first time ever for a Rowan County resident.

Even more surprising is that Zach beat his dad’s best 10K time, set exactly 25 years ago at the same meet. Zach said, “I really didn’t realize I broke his time until right after the race when that was the first thing he said. It is a great feeling and certainly not easy to beat it. Being at the same meet is a good story to tell down the road.”

Bob Marchinko came to Rowan by way of Ohio to establish himself as a successful high school and college cross country coach, a PE teacher and super competitive runner in the area. Bob is currently the assistant cross country coach at Catawba.

Bob said, “Zach’s found success in his college career faster than I did. He was All-Conference in cross country every year so far, including “All Region” this year, finishing top 25 at Regional Championships where he was 22nd. Regional Championships consists of every Division I College in NC, SC, Virginia, Kentucky and Virginia! My success did not come as easy and it took longer. I was All Conference in Track, both my sophomore and senior years, and won a conference title in cross country my junior Year. My collegiate running was at Cleveland State and Kent State.”

It seems that Zach has been running a long time, but Bob and mom, Wendy, were cautious, “We both wanted to be careful not to push Zach into running, we knew how hard training to be a long-distance runner can be. We were afraid that if he started to early, he would burn out. To be honest, we really did not care if he became a runner, we just wanted him to be involved in sports. For us, it always been more about teaching the importance of being the best we can be, no matter what we are doing. We knew if he learned the value of working hard and setting goals for something, he would be successful in life.”

Zach said, “I ran track in middle school, but it wasn’t super serious. I started off playing a lot of sports including baseball and basketball. But since elementary school, in the back of my head, I knew I would be a runner someday, just can’t really explain it.”

Bob said, “It was really a blessing to get to coach Zach and the rest of his buddies at Carson, many that I watched growing up since kindergarten. Watching those boys grow into young men and win championships was fun.”

Running fast in high school is nice but being ready for running in college was the bigger goal for both of us,” said Zach. “My dad helped me to continue to work hard and dream big.”

Zach, soon to complete his junior year, continued, “At UNCC, I have great teammates and coaches. When it comes to my goals, holding myself to higher standards makes me work just that much harder. For track this season, I am hoping my 10K time gets me into regionals and we win another outdoor team conference championship. For cross country next fall, I want the team to make it to nationals.”

For now, Bob and Wendy are enjoying the ride. He said, “We really try to not miss any of Zach’s races, which is sometimes tricky, since we travel all over the country at Catawba. We have only missed a few. We are enjoying the ride, just wishing that it wasn’t going by so fast! I think if he continues to enjoy it, the sky’s the limit. He can have a chance to qualify for Cross Country Nationals next year and then maybe the Olympic Trials in the marathon when he graduates, if he decides that is what he wants to do. Just count me as a very proud dad.”

Look for the Stamp Out Sexual Assault 5K for the Family Crisis Council on April 27. Lots more races and a triathlon are just ahead in May and June. www.salisburyrowanrunners.org