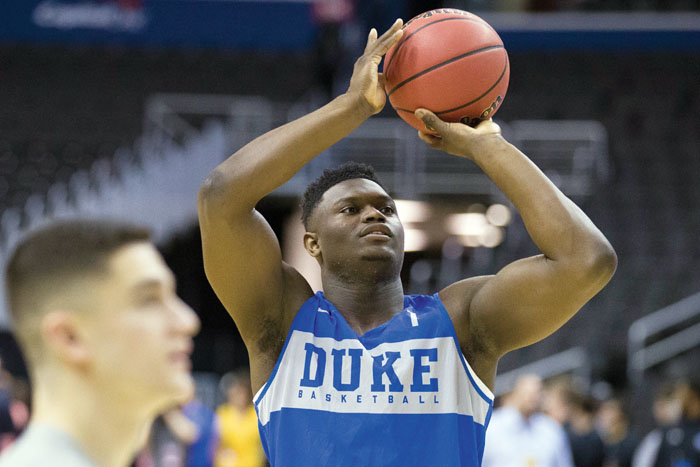 WASHINGTON (AP) — Zion Williamson went to Duke for its winning history. Kerry Blackshear went to Virginia Tech to create one.

Tom Izzo feels the need to explain why Michigan State hadn’t been in the Sweet 16 in four years. Tony Benford is excited LSU is back for the first time in 13 years.

The teams left in the NCAA Tournament’s East Region are the top four seeds but come together with very different reputations and expectations. Top-seeded Duke and second-seeded Michigan State are college basketball blue bloods expected to reach the Final Four and compete for national titles every season, while third-seeded LSU and fourth-seeded Virginia Tech are relative newcomers to this stage trying to overshadow spring football back on campus.

It’s rarer for some than it is for others.

When LSU faces Michigan State on Friday, it’ll be the Tigers’ first game beyond the NCAA Tournament’s opening weekend since 2006. The Spartans have made eight Sweet 16, four Elite Eight and three Final Four appearances in that time.

When Virginia Tech faces Duke in the nightcap, it’ll be the Hokies’ first Sweet 16 game since the field expanded in 1985 to the current format. Duke has been in the Sweet 16 eight times in the past 11 years and won the national title twice since 2010.

“Each and every person came in here to this program to help build a house,” Blackshear said. “We still got a lot more to go. We still got more games to play. Hopefully we come out on top of this game and we continue to build something with this program.”

These are four programs in very different spots at the moment. Virginia Tech is still in the stages of building an ACC powerhouse, LSU is in the midst of an FBI corruption investigation and head coach Will Wade has been suspended indefinitely, and Michigan State is trying to reach Duke’s gold standard of turning March Madness into consistent April cameos.

Izzo credited Duke coach Mike Krzyzewski for having arguably the most consistent program in the country. Izzo has a national title on his resume, too, and so many deep NCAA Tournament runs have ratcheted up the expectations at Michigan State, too.

“Those expectations are a privilege and an honor to have,” Izzo said. “You work all your life to get your program to the point where people are expecting you to be some certain places. And, yeah, you have to deal with it with your (players), and you have to tell them that you don’t win because you show up. You win because you earn the win.”

Overall No. 1 seed Duke earned this Sweet 16 appearance by surviving a second-round scare from ninth-seeded UCF. Williamson said during that game Krzyzewski kept telling players this is what the NCAA Tournament is all about.

“That’s just March Madness,” said Williamson, who will be playing his sixth game back from his right knee injury. “I think we should know based on the history of March Madness that doesn’t matter what the ranking is. The game is completely different. It’s different stakes now.”

Williamson, fellow freshman star R.J. Barrett and the Blue Devils have had to deal with being the team  Krzyzewski said everyone feels they have to beat to win. Virginia Tech already beat Duke once, though without point guard Justin Robinson and while Williamson was out, though that’s enough for a jolt of confidence.

“Three out of four years here at Virginia Tech we’ve beaten Duke,” Robinson said. “So I don’t think we’re excited for the moment. I think it’s just another game for us. And I think we’re going to be ready for whatever is going to come for us to end the game.”

LSU players don’t want to think about what’s to come beyond this season given questions about Wade and the recruitment of guard Javonte Smart . So they’re trying to stay focused on a matchup of two of the nation’s two best point guards in Tremont Waters versus Michigan State’s Cassius Winston while playing the role of the underdog who belongs in elite company.

KANSAS CITY, Mo. (AP) — North Carolina guard Kenny Williams is ready to go against Auburn in the NCAA Tournament after straining his hamstring last weekend, while top bench player Nassir Little is questionable with the flu.

Williams was injured early in the second half of the top-seeded Tar Heels’ win over Washington to reach the Sweet 16. He practiced a bit Wednesday in Chapel Hill and planned to practice again Thursday in Kansas City before the Tar Heels play the Tigers on Friday night.

“My hamstring is feeling pretty good,” said Williams, the Tar Heels’ best defensive stopper, who is averaging 8.5 points and 3.5 assists. “I don’t think it’ll be any setback for me.”

Even if Little can play, he won’t be close to 100 percent.

The 6-foot-6 freshman spiked a fever and was held out of practice Wednesday, and coach Roy Williams said his top player off the bench looked even worse on Thursday. Little skipped breakfast and did not accompany the team to Sprint Center for its shoot-around ahead of its Sweet 16 matchup.

“I can say it’s hard to make a 180-turn because there’s no way in the world he could play if we were playing today,” Roy Williams said. “He’s sitting there and he has a plate in front of him. He felt — it looked to me like it was hard to pick up the fork. And last time I looked, it wasn’t that heavy.”

Little arrived at North Carolina with one-and-done expectations, but he has gone through plenty of pits and valleys as a freshman. But he also seems to have found his stride in the postseason, scoring 19 points in a first-round win over Iona and 20 against the Huskies last weekend.

Little is averaging 10 points and 4.7 rebounds this season.

“We’ve played without Nassir in moments already this year,” Roy Williams said. “He was playing his best basketball — his basketball was going up and up and up — and he sprains his ankle and doesn’t play much in the Virginia game, and he gets poked in the eye the next game or vice versa.

“In the last two games last weekend, he was sensational. If he’s going to play like that all the time, we’re going to miss him, because we don’t have anybody that can do those things he did.”

However, the Tar Heels have plenty of depth. Brandon Robinson and Seventh Woods can soak up some of the minutes, and Kenny Williams said the starters can shoulder some of the burden.

“Of course, we want him out there. We don’t want anybody to not be able to play,” Kenny Williams said. “Nas is just someone that can come off the bench and give you 15, 20 minutes and he’ll be a factor. But if he’s not there, it’s nothing that we’re not used to. We’re used to guys not being able to play.”

The Tar Heels proved that in the last round against Washington.

Even before Williams hurt his hamstring, forward Garrison Brooks took an elbow right in the mouth from the Huskies’ Noah Dickerson. One tooth was knocked out, another was chipped and his lip cut. Brooks missed the final 12 minutes of the first half to get stitched up.

He returned for the second half, and the rest of the repair work took place after the game. He showed up at Sprint Center with a thin wire brace stretched across his front six teeth. He plans to wear a mouth guard when the Tar Heels take the floor on Friday night.

“Hindsight,” he said, laughing. “I would have worn one since day one.”