Cofer on the minds of Florida State teammates at Sweet 16 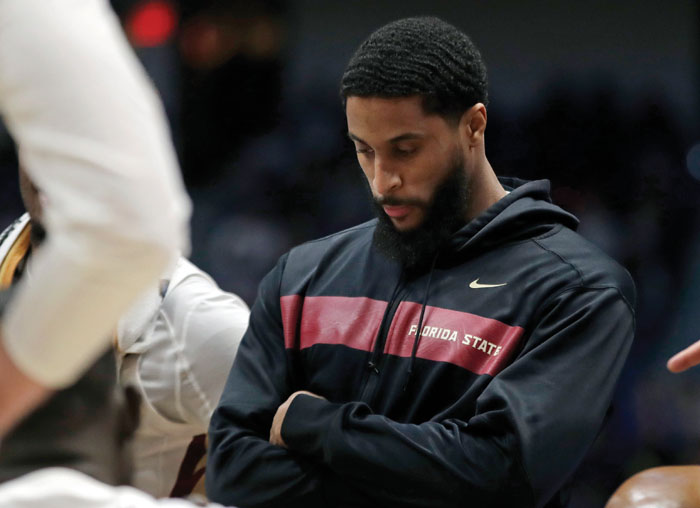 Florida State's Phil Cofer watches during a team huddle in the second half of a second round men's college basketball game against Murray State in the NCAA Tournament, Saturday, March 23, 2019, in Hartford, Conn. Florida State won 90-62. (AP Photo/Elise Amendola)

By JOE REEDY AP Sports Writer
ANAHEIM, Calif. (AP) — Phil Cofer is not with Florida State but he was very much on the minds of his teammates as they practiced Wednesday.
The Seminoles are in the Sweet 16 for the second straight year but the senior forward is in Georgia preparing for his father’s funeral on Saturday. Mike Cofer died on March 21 following a long illness.
Florida State (29-7) will face top-seeded Gonzaga in the West regional semifinal Thursday, with the winner facing either Michigan or Texas Tech on Saturday for a spot in the Final Four.
Fellow senior Terance Mann said he has talked to Cofer over the past couple days and said he is doing better.
“He just wished us luck, told us he will be watching, just talking about the game and what our game plan was,” Mann said.
Cofer received a call in the locker room in Hartford, Connecticut, after Florida State’s first-round victory over Vermont informing him of his father’s death. Mike Cofer, who played 10 seasons in the NFL for the Detroit Lions, battled amyloidosis for over a decade. It is a rare disease in which an abnormal protein builds up in organs with the potential to cause many health issues. It is the same disease which caused Matt Millen to get a heart transplant last Christmas Eve.
Phil Cofer remained with the team for their second-round victory over Murray State before flying home the following day. Coach Leonard Hamilton said Cofer originally intended to join the team in California, but those plans changed once he returned home and learned about the arrangements.
“Once they sat down as a family and discussed it, it became obvious that the best thing for him to do was to sacrifice being out here with his teammates and take care of the family business, and I agree with him,” Hamilton said.
Cofer has been the team’s emotional leader the past two seasons. He led the team in scoring last season, averaging 12.8 points as Florida State made the Elite Eight. Cofer has been plagued by injuries this season. He averaged 7.4 points and missed 11 games due to a foot injury.
Cofer also did not play in either NCAA Tournament game last week due to a right foot injury.
“Phil has always been a great teammate,” said sophomore forward Mifondu Kabengele, who leads the Seminoles in scoring (13.4 points per game). “Whatever he has been going through this season has been tough. We understand. We are going to play hard for him and get him through it this time.”
Hamilton, who is in his 31st year as a college coach and 17th at Florida State, has faced plenty of situations over the years, but he said this is the first where a parent of one of his players has died during the NCAA Tournament or this late in season.
Hamilton credited sports psychologist Joseph Carr with helping the players and staff once they learned of Mike Cofer’s death.
“Kids talked about and shared their experiences, and I think it did a lot to bring us somewhat back into the right focus,” Hamilton said. “You never really know when you’re dealing with those types of things how it manifests itself in different responses. Grief appears, raises its ugly head sometimes in different forms. I hope we have addressed it properly.”
Mann, who had “Mike Cofer, 3-21-19” scribbled on his left shoe for the Murray State game, said he plans to do the same thing Thursday. Mann, Cofer and center Christ Koumadje have led the Seminoles to three straight NCAA Tournaments and a school-record 98 wins.
“All the trials and tribulations that we have been through have brought us closer,” Mann said. “I think the Elite Eight run last year solidified our class and how close we are.”
Hamilton hopes his team can overcome the adversity and advance to the Final Four for the first time since 1972. The Seminoles have already dealt with injuries and a 1-4 start in Atlantic Coast Conference play to win 16 of their last 18.
“It’s been very challenging, but our guys are focused, and we’re hopeful that how we represent ourselves will be a reflection of the respect we have for Mike Cofer and the Cofer family,” Hamilton said. “I think for the most part our guys have grown and we have turned our attention to the game preparation as it relates to Gonzaga.”
___
Follow Joe Reedy at www.twitter.com/joereedy
___
More AP college basketball: https://apnews.com/MarchMadness and https://twitter.com/AP_Top25