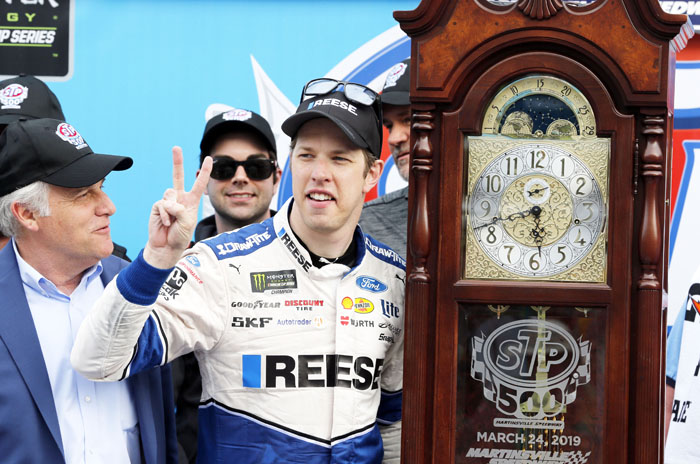 MARTINSVILLE, Va. (AP) — Brad Keselowski gave Team Penske and the new Ford Mustang its third Cup victory through the first six races of the season by routing the field at Martinsville Speedway.
Keselowski led 446 of the 500 laps around the shortest track on the NASCAR schedule and was only challenged a handful of times by Chase Elliott — the only driver to pass Keselowski on the track Sunday.
Although Elliott led 49 laps, a late caution sent the field to pit road and Keselowski beat Elliott back to the track. Elliott could never get close enough to challenge Keselowski for the win again.
“The car was really good. Just a great day for a team,” Keselowski said. “Just one of those days you dream of as a race car driver, where you’ve got a great car.”
The 446 laps led is the most for a winning driver since Kyle Petty led 484 to win at Rockingham in 1992. It was the most laps Keselowski has ever led in a single race, passing the mark of 312 laps out front at Texas Motor Speedway in 2015.
He credited the offseason work by Ford, which rolled out a new Cup car at the start of the season, and the Team Penske pit stops that got him off pit road first every time he came in for service.
“Ford worked really hard in the offseason to build these cars and make them real strong and so far, so good,” said Keselowski. “It’s just a great day for our team, awesome execution on pit road. Those guys work really hard.”
Ford has three wins this season, all from Team Penske, while Toyota won the other three races.
Martinsville, a paperclip-shaped track at 0.526 miles, typically forces drivers to gouge each other out of the way. The tight confines of the tiny Virginia track raises the aggravation levels for most of the field and usually leads to bumping, banging and busted-up race cars. But NASCAR’s new rules package, in its first stop at a short track, seemed to hamper drivers’ ability to close on the leader and it limited passing opportunities.
The one time Elliott did pass Keselowski, he studied Elliott’s lines and took notes for when he was back out front.
“He was certainly faster on that short run, and when he passed me I learned just enough,” Keselowski said. “The pit crew got me back in front of him on the next to last pit stop, and I seemed to kind of apply the lessons.”
Keselowski started the race third behind teammate Joey Logano, who led the first five laps of the race. Keselowski briefly nudged Logano out of the groove on the sixth lap and took off for the rout that earned him his second Martinsville grandfather clock.
Elliott finished second in a Chevrolet from Hendrick Motorsports — the first top-five finish for a Hendrick driver this season.
“I felt like we were about as even with him as we could be,” said Elliott, who second-guessed the timing of one of his attempts to pass Keselowski.
“When he did get the lead, there was a little advantage to being out front, being able to work traffic … I tried to move up there at the end, and I don’t know if I could have got to him. Maybe if I moved up a little sooner, maybe next time.”
Kyle Busch was third in a Toyota for Joe Gibbs Racing. Busch had won two consecutive Cup races before Sunday, the Truck Series race Saturday at Martinsville, and was seeking a weekend sweep. Busch notched his fifth top-five finish of the season while making his 1,000th career NASCAR national series start.
“We fought hard for today’s finish, not a finish that we wanted to get,” Busch said. “Thought we had a chance to win actually, but could have been a whole lot worse. We’ll go on.”
Penske driver Ryan Blaney was fourth, while Gibbs driver and five-time Martinsville winner Denny Hamlin was fifth.
Stewart-Haas Racing drivers Kevin Harvick and Clint Bowyer were sixth and seventh, Gibbs driver Martin Truex Jr. was eighth, then SHR drivers Aric Almirola and Daniel Suarez completed the top 10.
Ford drivers took six spots in the top 10, while Gibbs and Toyota claimed three of the slots.

JOHNSON SLUMPS
Jimmie Johnson leads all active drivers with nine victories at Martinsville, but his struggles spanning more than a year continued Sunday. He was lapped during the second stage and finished 24th. Since winning the fall 2016 race, Johnson has not finished higher than 12th.

NO REPEAT WINNER
Clint Bowyer was the defending race winner and worked his way to fifth as he exited pit road from a pit stop in the third stage. But he was penalized for speeding onto pit road and dropped to the back of the pack on the restart.
“Well, there went that,” he moaned over his radio.
Bowyer was flagged for speeding on the next round of pit stops, too, and finished sixth.