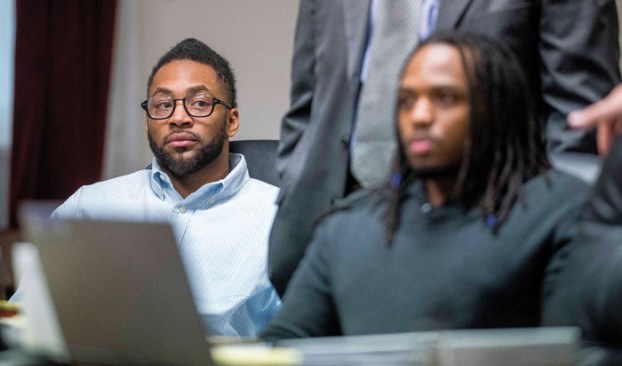 After hours of deliberating, jurors on Friday found Darius Abel and James Robinson guilty in the 2014 murders of Tony Walker and Junior Walker, who were shot multiple times during a home invasion and robbery at their Spencer home.

Abel and Robinson were each found guilty on two counts of first-degree murder. They were sentenced to life in prison without parole.

Angela Hill and Jasmine Walker — the mother and sister, respectively, of murder victim Tony Walker — testified a week ago that in October 2014, they were forced to the ground at gunpoint by three men wearing gorilla masks who forced their way into their Spencer home.

The women had returned from watching a movie and were talking with Junior Walker, who’d come to live with his sister because his marriage was ending. The women testified that they witnessed the three gunmen shoot Tony and then Junior when he tried to reach for his own gun.

Both victims were shot multiple times. Junior Walker was repeatedly hit on the head with the butt of his own gun.

The three-week trial came to a close Thursday as Butler made closing statements and defense attorneys Jay White and Darrin Jordan made their case for their clients’ innocence. Jurors returned a guilty verdict on Friday.

By Sara Burnette and Michael Tarm Associated Press CHICAGO — R. Kelly, the R&B star who has been trailed for... read more