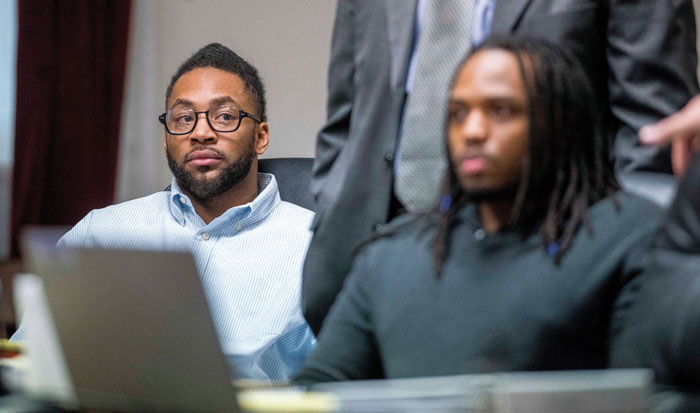 SALISBURY — In tearful testimony, Jasmine Walker recounted the night in 2014 when three masked men walked into her family’s Spencer home and shot her brother, Antonio, and uncle, James Walker, to death.

Walker, who now lives in Charlotte, took the witness stand Monday on the first day of testimony in a trial that began last week with jury selection. Opening statements were given Monday morning by Assistant District Attorney Paxton Butler and defense attorney Darrin Jordan. By midmorning, jurors had heard from the state’s first witness, Jasmine Walker, the younger sister of Antonio “Tony” Walker.

Jasmine Walker confirmed for the court that she and her mother, Angela Hill, had just returned from the movies that night and spoke with her uncle James “Junior” Walker, who was on the front porch.

Not long after the two women were inside the Fifth Street home with Junior, a tall man wearing a gorilla mask walked through the open front door. Both mother and daughter thought it was a joke being made by Willie Fields, an acquaintance of Tony Walker.

Their smiles faded as the masked man displayed a gun and demanded the three get down on the floor. Then two more masked men walked through the door.

Jasmine Walker said her mother told her uncle, “Junior, you gonna let them come and do this?” Junior pleaded with the men not to hurt his family.

Angela Hill’s testimony corroborated her daughter’s. She said the three men walked into the front door, led by a tall masked man. Defense attorneys Jordan and Jay White said the “tall one” that both mother and daughter referred to in their testimony was Kenneth “Kenny” Abel. Abel is the cousin of Darius Abel.

Kenneth Abel accepted a plea deal in September and is likely to testify against Darius Abel and James Michael “Mikey” Robinson.

Both Jasmine Walker and Hill tearfully recounted hearing Tony yell for his uncle. They heard a scuffle and a single gunshot followed by more from Tony’s bedroom.

Hill said she heard one gunshot from her son’s bedroom and she zoned out.

“You lose it after hearing that,” she testified.

Tony, with blood on the side of his white T-shirt, stumbled into the living room, she said. He appeared to be moving toward the place where his uncle kept a gun.

Junior reached for the gun and, according to testimony, Kenneth Abel said, “Don’t you do it.”

Junior managed to fire a number of shots at the men until he was shot multiple times at close range and beaten with the butt of his own gun until he died.

The “tall one” shot Tony repeatedly, Hill said, then fired in the direction of her and Jasmine.

Hill spoke up, but her daughter told her to stop talking before she was shot. All three men then left.

Hill went toward the door to shut it, but her daughter urged her to wait. Hill said she waited for about three minutes and locked the door. Then they called 911.

Jurors heard a nearly five-minute 911 call placed by a hysterical Jasmine Walker, who was hard to understand at times. She was screaming into the phone, asking for help to come. She told the dispatcher she believed her uncle was dead.

She begged the dispatcher to send help for her brother while her mother performed CPR.

“It’s going to be very important that you stay calm,” the female dispatcher could be heard saying.

“Ma’am, ma’am,” the dispatcher repeated to an inaudible Jasmine Walker.

Jasmine Walker told the dispatcher her uncle had been shot in the head and on his side. She said Junior Walker had a heart condition. She said one of the assailants dropped his cellphone but was gone.

Angela Hill told the court her son sold marijuana and he’d done so since he was a young teenager against her pleadings. She said he kept his marijuana in a gallon bucket in his room behind his television.

She said she was familiar with a few people whom her son got his drugs from, but Hill denied knowing associates of Kenneth Abel.

Jurors heard from Spencer Police Department Officer Wayne Comer, the first officer on the scene. Comer, who has been in law enforcement for 20 years, said some of that time had been as a school resource officer. He recalled seeing Tony Walker in the halls of North Rowan High School. He was also familiar with Hill from seeing her at North Rowan.

He said he tried to calm her down when he arrived. He checked the pulse of both Tony and Junior Walker and determined both men were dead.

The morning after, Comer secured the scene near the Eighth Street Park after a gorilla mask and other evidence was found there.

Philip Sparger, who lived on Seventh Street, said he’d taken his dog outside the night of the murders and saw two men walk from his backyard and through his carport. He confronted one of the men, who he recalled wore camo jackets. Both Jasmine Walker and her mother said the masked men were wearing camouflage jackets and dark pants.

Sparger said the man told him he was lost and saw his backyard light. He watched the men walk, then run toward Salisbury Avenue, away from his home. Sparger said one man was over 6 feet tall. The other was similar in height to Sparger, he said, at about 5 feet, 8 inches tall, because he was eye-to-eye with him.

Grayland Watson, a town of Spencer Public Works employee, said he was mowing town property near Sixth, Hudson and Baldwin streets the day after the murders when he noticed a glove.

He didn’t think much of it until he saw a second one. He recalled hearing about the murders and decided to call the police.

Manslaughter plea in toddler’s death does not end investigation