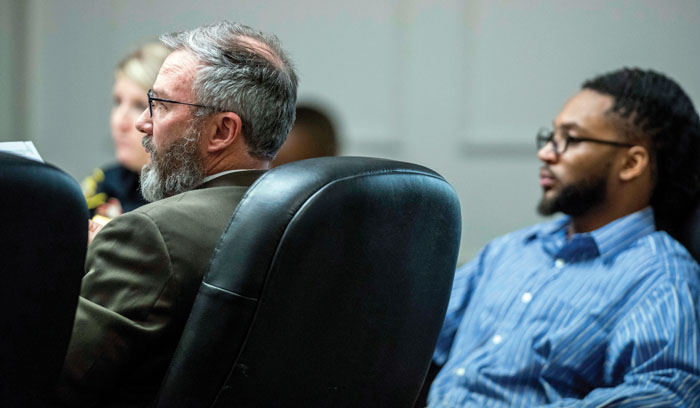 SALISBURY — Rowan County Assistant District Attorney Paxton Butler said Thursday that the evidence in the 2014 murders of a Spencer man and his uncle is irrefutable, especially DNA evidence.

But that attorneys for co-defendants Darius Abel and James “Mikey” Robinson said the state’s star witness was the only killer.

The three-week trial came to a close Thursday as Butler made closing statements and defense attorneys Jay White and Darrin Jordan made their case for their clients’ innocence.

They are charged in the shooting deaths of Antonio “Tony” Walker and his uncle James “Junior” Walker.

On Wednesday, defense attorney Darrin Jordan said his client, Darius Abel, has an alibi and that he would produce evidence of it. But on Thursday, Abel elected not to testify, and Jordan did not present evidence.

Robinson also chose to not testify.

On Oct. 8, 2014, the Spencer Police Department was called to Fifth Street about a home invasion and robbery that resulted in the shooting deaths of Tony and Junior Walker. Both men had been shot multiple times.

Jasmine Walker, the sister of Tony Walker, testified early in the trial that three men wearing gorilla masks and camouflage jackets forced their way into the home. She was heard in a frantic 911 tape begging for help for her brother and uncle.

Butler replayed that tape during his closing argument.

“It was the three dudes in gorilla masks,” Butler said, holding up a gorilla mask found near the scene and borrowing the words from Jasmine Walker’s testimony.

“And they’ve been hiding ever since. One of them has been brought to justice. It’s time for the others,” Butler said.

Kenneth Abel, a third defendant, accepted a plea arrangement in September. In exchange for “complete and truthful” testimony, Kenneth Abel testified against his co-defendants — who are also his cousins.

Abel testified that he, Darius Abel and James Robinson intended to rob Tony Walker, but he said things didn’t turn out as planned.

“Who were those two fellas with Kenny Abel? Do you know? I suspect you do,” Butler said.

He described the injuries and showed jurors a picture of Junior Walker’s head injury. He was shot in the head and repeatedly struck in the head with the butt of his own gun. Butler described a violent, horrendous, chaotic crime scene.

He said if Kenneth Abel was going to commit a crime, he would’ve wanted to take people with him whom he trusted — his cousins, someone who wouldn’t “punk out.”

“We don’t know who was under the mask,” said Robinson’s attorney, Jay White.

White said jurors should believe Hill’s testimony and that of her daughter Jasmine over that of the state’s key witness, Kenneth Abel.

“Did you ever see Angela Hill or Jasmine Walker point out Mr. Robinson or Darius Abel? They weren’t there,” White said.

The defense attorney said not one witness or law enforcement officer said Darius Abel or James Robinson was at the house. He said the testimony of Kenneth Abel and the evidence presented by prosecutors contradict each other.

“Kenneth Abel said they all came into the house. Angela Hill and Jasmine Walker said the ‘tall one’ came in first,” White said.

He also questioned why prosecutors didn’t test all the evidence that was collected. Investigators found blood stains, bullet casings and other items that were photographed or at the scene but never tested or collected, he said.

White said Kenneth Abel told the court what it wanted to hear to get the best possible deal for himself.

He said DNA from Darius Abel and James Robinson may have been on a gorilla mask and du-rag found at the scene, but it wasn’t found inside the Spencer home.

Attorney Jordan said Kenneth Abel had three years and nine months to read over the evidence and learn the case, but he is living a lie.

“He essentially had a free pass to say what he wanted to in an effort to negotiate a plea,” Jordan said.

He said jurors should be concerned because Kenneth Abel may have lied about some things.

“He’s the most important witness against these two young men,” Jordan said. “The state made this great deal with a cold-blooded killer so they could try to convict Darius Abel and Michael Robinson of this crime.”