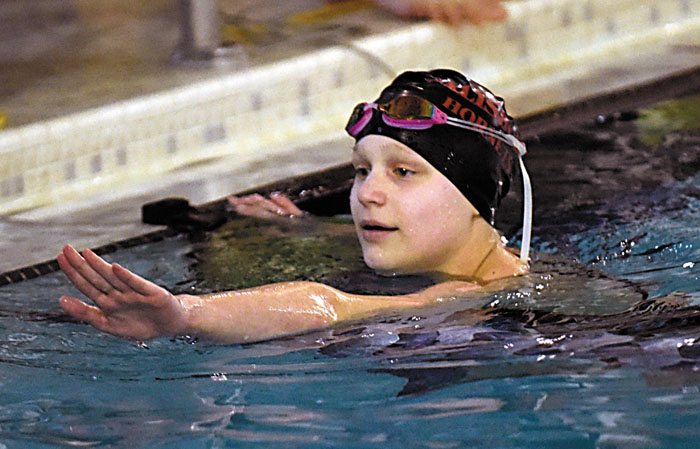 Wayne Hinshaw file photo/for the Salisbury Post ... Salisbury’s Emily Knorr, shown winning the 200-yard freestyle at the Rowan County Championships, won a state title on Saturday in Cary. She finished first in the 500-yard free on Saturday in 4:52.73.

CARY — Salisbury took five girls to the 1A/2A State Championships on Saturday and placed seventh in the state at Triangle Aquatic Center.

“For such a small number, they made some noise,” Salisbury coach Sallie Pittman said. “‘I’m thrilled with what they did. There were a lot of personal-best efforts today, individually and on the relay legs. Just really proud of them.”

Emily Knorr was the individual standout. She grabbed her first state title in the 500 freestyle in 4:52.73.

“It was bang-bang-bang, those three girls were so close, and unfortunately for Emily, they were both 3 or 4 inches taller,” Pittman said. “But I think not winning that race made her want to win the 500 even more. She came back, She came out for that race with a vengeance and didn’t leave any doubt. It didn’t come down to a touch.”

“For a sophomore to win a championship at this level, that’s just a great accomplishment,” Pittman said.

As a freshman, Emily Knorr was second in the 500 free in state event in 4:59.18, so she’s still making significant progress. She took fifth in the 200 free as a freshman.

Erhart contributed a seventh place in the 50 freestyle and a 12th in the 100 butterfly.

Salisbury’s also scored well in a pair of relays with the Knorrs and Erhart joined by Hollingsworth for a seventh-place finish in the 400 free relay. The Knorrs, Erhart and Woolly placed fifth in the 200 medley relay.

“Katie Knorr didn’t have a lot of down time to recuperate between giving every last thing she had in the 100 backstroke to swimming in that 400 relay,” Pittman said. “But she gave us everything she had again.”

Salisbury’s boys were led by Roarke Burton. He was strong in the sprints, taking fifth in the 50 freestyle and third in the 100 free.

Roshen Amin earned points with an 11th-place finish in the 100 butterfly.

In the relays, the Hornets placed ninth in the 400 free relay. That was Amin, David Holden, Gabriel McLendon and Burton.

Max Crawford, McLendon, Amin and Burton were 14th in the 200 medley relay.

The individual standout for South Rowan’s boys was senior Blaise Bumgarner, who continued to break school records on his final day of competition.

Cameron Hurd was 20th in the 100 breaststroke.

South’s relay units that carried the Raiders to the county championship were busy again. Bumgarner, Hurd, Christian Reynolds and Noah Severt were 17th in the 200 medley relay — they were nipped by the Hornets for 16th in the prelim — and 14th in the 200 free relay.