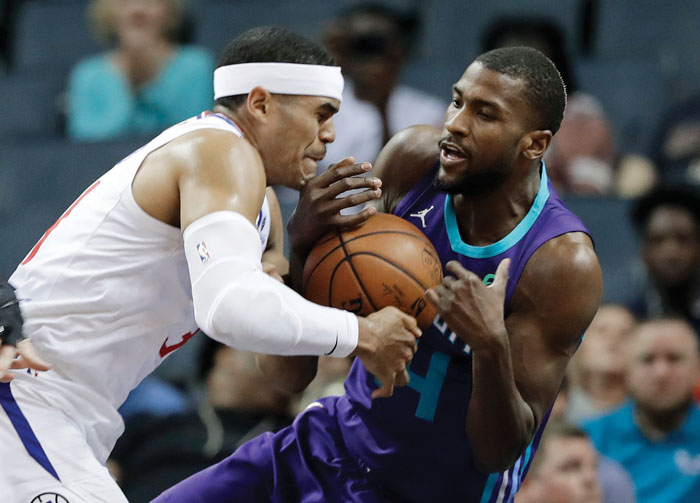 CHARLOTTE (AP) — Still not quite healed from a shoulder strain he suffered last week, Tobias Harris came up big for the Los Angeles Clippers.

Harris scored 34 points, including a running jumper in the lane with 4.3 seconds remaining, and the Clippers rallied from 20 points down to beat the Charlotte Hornets 117-115 on Tuesday night.

“It’s as good as it’s going to be,” Harris said of his injured shoulder. “It’s not any better or worse. It’s about pushing myself and battling through it, keeping my mental state at a high level to go into a game and be effective.”

Charlotte had a chance to tie or take the lead on its last possession, but struggled to inbound the ball and Marvin Williams’ 3-point attempt at the buzzer was short.

“That wasn’t what we were looking for,” Hornets coach James Borrego said. “I could have come up with something better.”

“There are a lot of teams that when they’re up 20, they win the game,” Lamb said. “There are times when you’re down 20 that you lose, or you’re down 20 and you make a run. A 20-point lead in the NBA has always been something that’s not safe.”

Beverly’s loose-ball foul with 21.1 seconds left put Marvin Williams on the line for Charlotte. Williams hit both to tie it at 115.

Walker, held to 13 in a Clippers win this season, had 25 by halftime — but just seven in the second half.

The Clippers kept the ball from getting anywhere close to him for the final shot.

“We thought, ‘deny,’” Clippers coach Doc Rivers said. “We did not want him to catch the ball, and we had already decided that we were not going to trap because we didn’t want anyone getting the open 3-pointer. We said ‘at all costs, if we can deny him the ball, deny him the ball.”

Hornets: Center Cody Zeller, who missed 16 games after surgery on his right hand, entered the game at the 6:43 mark of the first period with a small brace on his hand, but didn’t wear it in the second half. He finished with 11 rebounds.  … Tony Parker left after 9 minutes on the court with a back injury and didn’t return. . Marvin Williams tied a career high with four blocked shots.

The Clippers kept a gaudy 3-point shooting percentage throughout and it didn’t fade away late. Late in the third, it was 77 percent.

“I was like, are we really shooting 77 percent?” Harris said. “But we were. We should just be pulling up from anywhere at that point.”

Late in the first half, Walker picked up a loose ball on the Clippers’ end. Teammate Bismack Biyombo fell to the court also the ball. Walker, with the ball still in play, helped Biyombo up before turning up court on the dribble, prompting a surprised smile from Biyombo.

Walker will participate in the 3-point contest at NBA All-Star weekend. Teammate Miles Bridges will take part in the slam-dunk contest.