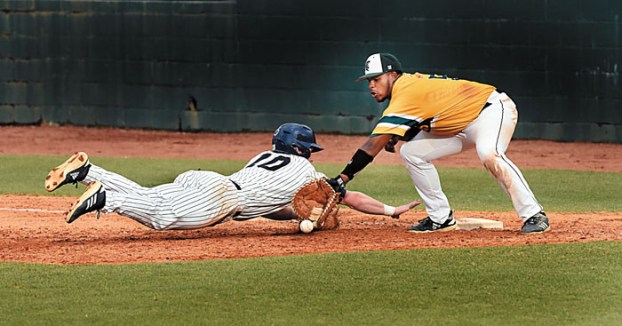 Wayne Hinshaw/for the Salisbury Post ... Catawba’s Joe Butts (10) dives safely back to first base as Mount Olive’s Justin Lee takes the throw from the pitcher.

Catawba baseball is off to 4-1 start 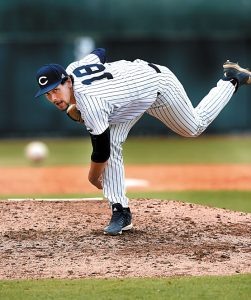 SALISBURY — Baseball returned to Newman Park on Wednesday and reminded everyone why some believe it to be the best game ever invented.

Baseball is the sport of the unexpected, the sport of the underdog, and what could be more surprising than the seventh-inning grand slam that Catawba’s Jacob Nester launched, lifting the Indians to a 9-7 win against 23rd-ranked Mount Olive.

Nester, a senior who transferred to Catawba from Chowan before his sophomore season, is a good player, but he’s not a home run hitter. That fateful seventh-inning at-bat was the 351st time he’s stepped to the plate for the Indians. He’d hit one previous homer. That’s right — one.

Adding to the long odds, Nester had started this season in an awful slump. He was batting ninth against Mount Olive for a reason.

“Nester is always going to battle, he’s always going to make a pitcher work, he’s going to give you a good at-bat,” Catawba coach Jim Gantt said. “He’s capable. His timing was just off in those four games we played in Florida to start the season. He was a little late getting his swing started. We talked about making the adjustment.”

Down 3-0 right off the bat, Catawba scratched and clawed to stay in the game with the stout Trojans (3-1), who already had whipped No. 2-ranked Tampa.

Catawba (4-1) managed to tie the game at 5-all when Jeremy Simpson drew a bases-loaded walk in the sixth.

The decisive bottom of the seventh began with Catawba cleanup man Jackson Raper pulling a single through the right side. Hunter Shepherd struck out, but Joe Butts lashed a hit to right-center. After center fielder Jon Cosme over-ran the ball, Butts and Raper were both in scoring position. Cameron Morrison was next and didn’t try to be a hero. He accepted the walk that filled the bases. Freshman Robbie Cowie was a little over-anxious and was a strikeout victim for the second out, but then Nester stepped into the box. He picked up Cowie and all of his teammates.

Nester was ahead in the count 2-and-0 when he jolted the next pitch over the wall in right-center for an opposite-field slam. As he sprinted between first and second, Nester watched the ball disappear and allowed himself a brief moment of celebration. For a few seconds, he was the Dodgers’ Kirk Gibson in the World Series. His delirious teammates were dancing out of the dugout by then.

“I’d only hit one home run as a college player, but I really wasn’t that surprised when it went out,” Nester said. “It was a great pitch to hit, a fastball middle-in, and I knew I’d put a good swing on it. I got so excited because I was off to such a slow start. It  felt good to finally do something for the team.”

The other defining moment for Catawba came on the mound in the top of the sixth when Mount Olive appeared on the brink of putting the Indians away.

D.J. Laxton had relieved tiring Catawba starter Shepherd in the sixth with two men on and had been greeted by Jett Swetland’s run-scoring double to the right-field wall. Now the Indians trailed 5-4 and runners were at second and third with none out. Gantt probably would’ve been happy to get out of that mess down 7-4. Instead Laxton kept the deficit at 5-4. The side-armer made a string of quality pitches under pressure, struck out two scary hitters and got a popup to shallow left in between.

“He always goes in there with a plan, and that’s why he’s our go-to guy,” Gantt said. “That doesn’t mean he’s going to get the job done every time, but we know he’s going to challenge hitters. He’s never scared.”

Laxton said Morrison, the catcher who called the pitches, deserved as much credit as he did.

“Mount Olive is a great-hitting team, power hitters who like to elevate the ball, but we felt that if we could locate we could turn their strength to our advantage,” Laxton said. “I do like the big spots, the big situations, and that was a big situation.”

Nester’s shot provided a 9-5 cushion. It was enough. Nate Estes and Joe Mason walloped solo homers in the ninth for the Trojans, but Catawba held on. Peyton Williams got a strikeout for the 27th out.

Gantt used six hurlers. All of them got outs. They combined for a dozen whiffs. Catawba’s bullpen didn’t allow any walks the last four innings. That’s critical at Newman Park.

Catawba has two outfielders hurt, with Bryce Butler and Lee Poteat down.  Henderson Lentz has stepped in for Butler as the leadoff man/center fielder and had three hits on Wednesday. He kept several rallies going.

“Last year we started off 0-7, so it was a huge momentum boost for us to start out so well (3-1) in Florida,” said lefty Bryan Ketchie, who threw six pitches, got two outs and was the winning pitcher. “We played with confidence today against a really good team.  The bullpen locked them down for a while, and then Nester came through. That might be the hardest ball he’s ever hit.”

Intimidators release/Staff report KANNAPOLIS — Fans can help rename the Kannapolis Intimidators, but they only have week to do it.... read more