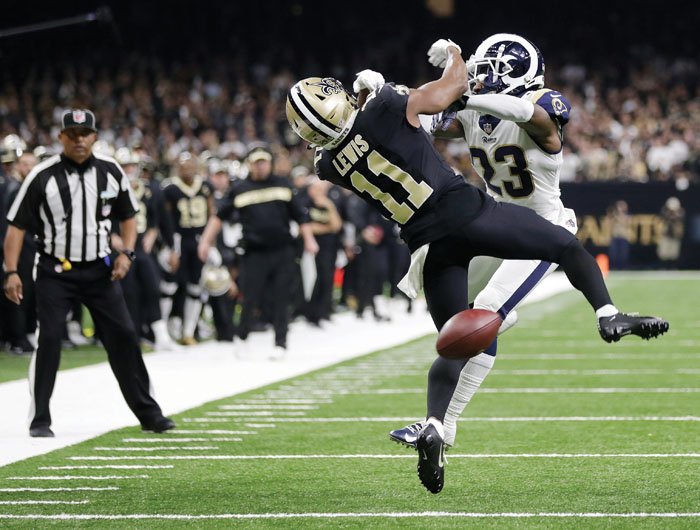 By STACEY PLAISANCE, Associated Press
NEW ORLEANS (AP) — A New Orleans bakery is turning out thousands of cookies with a picture of a referee with a circle and slash mark across it in red icing.
The owner of a locksmith shop has hung posters and signs taking aim at NFL Commissioner Roger Goodell, and some residents have hung posters of a referee wearing a blindfold.
New Orleans Saints fans have found some pretty creative ways to express their displeasure over the infamous “no call” during last weekend’s Saints-Rams championship game. But their newest tactic may make the loudest statement – a Super Bowl boycott.
“We’re angry,” said Lauren Haydel, a Saints fan and business owner who has started printing and selling T-shirts featuring a referee voodoo doll with pins sticking out of it from her Fleurty Girl retail stores.
Haydel says she’ll be joining the boycott and not watching the big game on Super Bowl Sunday.
“We’re not even going to go to a place with TVs on,” she said. “I don’t care to watch it.”
Haydel said fans were looking forward to a Saints Super Bowl in Atlanta, and a boycott of the game is the best response the Who Dat Nation can give.
“That’s how we’ll really stick it to them where it hurts,” she said.
Several bars in the city have said they won’t be showing the game in their establishments, and residents say they’re making other plans to avoid the game.
Michelle Miller, owner of H Rault Locksmiths, says she’s attending a so-called “Boycott Bowl” party.
“It’s a devastating loss, and we won’t get over it, but … we are used to getting disrespected by the National Football League Association,” she said, making a reference to “Bounty Gate,” when the NFL suspended Saints coaches — including head coach Sean Payton for a year — after finding the Saints were rewarding players for hits on opponents with intent to injure.
Miller incorporated her locksmith business while taking digs at the NFL.
One sign reads: “We know keys, we know Brees … We know he’s the MVP,” a reference to Saints quarterback Drew Brees. Another sign reads like a want-ad for a “no call locksmith” with “For hire Roger Goodell’s blind boys locksmith.”
“We all saw it,” Miller said. “We all saw the same thing, all of us except the blind referee.”
Owners of Haydel’s Bakery took a sweeter approach, selling anti-referee cookies alongside their signature king cakes and pastries.
“I don’t think there’s anything short of replaying the game that would make New Orleans Saints fans happy,” said David Haydel, one of the bakery owners. “We know that’s probably not going to happen, but at least they can take a bite out of the injustice.”
Though lawsuits have been filed by Saints season ticket holders asking a Louisiana court to reverse the results or reschedule the game, experts give the move little chance of success.
___
More AP NFL: https://apnews.com/NFL and https://twitter.com/AP_NFL

To teammates, Tom Brady stands alone as he chases…