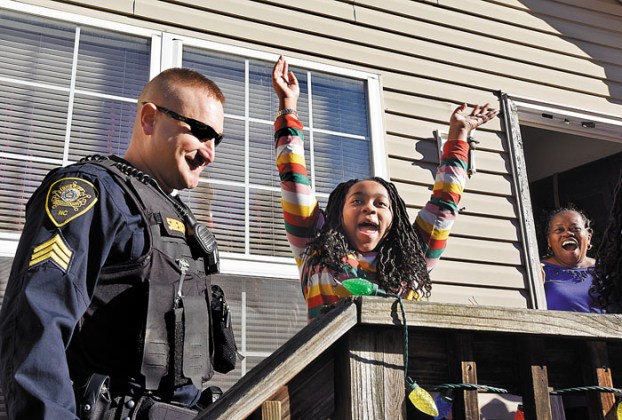 Sheriff Deputy Justin Nelson smiles as 11-year-old Kenleigh Dalton celebrates her Christmas gifts. Nelson organized the gift collection for her. Her grandmother Dixie Dalton is on the far right. photo by Wayne Hinshaw, for the Salisbury Post

Click here to see more photos with this story.

SALISBURY — Emergency responders carried present after present into the home of Kenleigh Dalton, who lost her mother, Sonya, a month ago after being hit by a car.

Laughter and excitement filled the home on Airport Road on Saturday as the Rowan County Sheriff’s Office  and Locke Fire Department surprised Dalton on her 11th birthday with presents, a visit from Santa, a birthday cake and a Christmas dinner.

“This just meant the absolute world to us,” said Dixie Dalton, Kenleigh’s grandmother. “In this world that we live in at the moment, it just seems sometimes like it’s topsy-turvy. At this particular moment, we have the best love, we know that there’s joy and also that there’s peace, and we thank everyone from the very bottom of our heart how they have reached out to us with their support and their love.”

Sonya Dalton, 34, was struck by a drunken driver and killed while checking the mail on Nov. 13.

Rowan County Sgt. Justin Nelson decided to do something special for Kenleigh and her family. Nelson said his daughter and Kenleigh both attend Knollwood Elementary and he works extra duty at the school.

“We delivered some presents with Santa Claus to a little girl who lost her mom in a terrible way last month,” Nelson said.

The police and fire departments raised money and went Christmas shopping to make the holiday season better for the family after Sonya’s death.

“It’s awesome that we’re able to help a little girl that’s had a terrible time at holidays and was able to get the fire department involved also,” Nelson said.

They were planning on surprising Kenleigh on Sunday, but Dixie told them Saturday was Kenleigh’s birthday.

Dixie said she was at a loss for words with how supportive people have been during a difficult time for the family.

“During this tragedy, we have been overwhelmed with just the outpouring of love from the community, from the school, from the folks here on Airport Road and the other development right down there,” Dixie said. “During this tragedy of Sonya’s death, it seems like it’s just brought out the goodness in everyone and we appreciate everything that everyone has done for Kenleigh and our family.”

Under the tree, stacks of presents sat with gifts from Santa, like a Barbie doll house, slime and two scooters.

“I’m still very excited for toys and presents and stuff,” Kenleigh said before taking a ride on one of the scooters.

Dixie said Kenleigh has down days when she really misses her mother, but Saturday was a day for Kenleigh to celebrate her birthday and the upcoming holiday.

“She’s been doing pretty good,” Dixie said. “Every once in a while she had a sad day one day and she just cried and said, ‘Well, I miss my mom.’ She just been surrounded by family and friends who have kept her happy. She’s 11 today. It’s her day. It’s all about her.”

Nelson said the squad was happy to help Kenleigh and her family.

“It made Christmas good this year, I think, for all involved and for her and her family,” Alexander said.

Dixie said she was appreciative of the emergency responders.

“It just goes to show that in this world there’s good people,” Dixie said. “I don’t know them. They didn’t know me. They didn’t have to but they did. …They have just done above and beyond to support our family.”

The emergency responders gave 25 Christmas presents to Kenleigh, Food Lion gift cards to provide groceries for the family, a donated birthday cake and a turkey and ham for Christmas dinner.

By Shavonne Walker shavonne.walker@salisburypost.com SALISBURY — The Ellison sisters couldn’t wait to get their bicycles delivered to their house Friday... read more