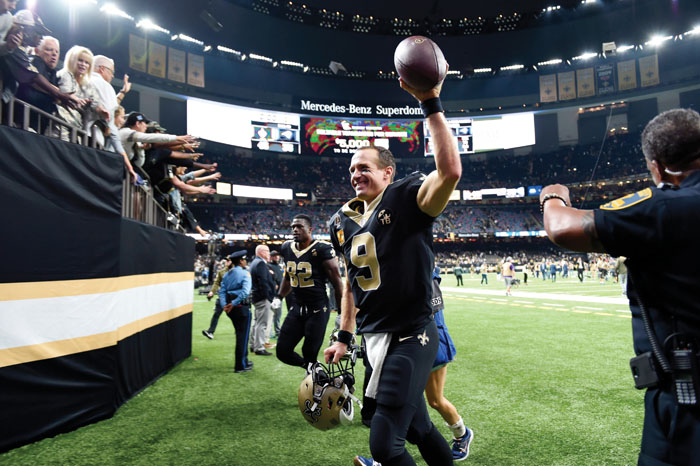 The Saints knocked off the Los Angeles Rams 45-35 on Sunday, handing them their first loss of the season.

The Saints jumped three spots to No. 1 in the latest AP Pro32 poll . They received seven of 12 first-place votes and 377 points in balloting Tuesday by media members who regularly cover the NFL.

The Kansas City Chiefs and the surging New England Patriots are tied for No. 2. The Patriots, who have won six in a row, got two first-place votes and the Chiefs received the remaining three, giving both teams 364 points.

“Andy Reid has been a terrific coach for so many years, but Patrick Mahomes’ brilliance allows Reid’s true play-calling talents shine through like never before,” Newsday’s Bob Glauber said of the Chiefs.

The Rams fell from the top spot to No. 4. They will look to get back to their winning ways when they host NFC West rival Seattle on Sunday.

“Although they couldn’t stop Drew Brees when it counted, the Rams are still in very good shape to secure an NFC playoff bye,” said Ira Kaufman of Fox 13 in Tampa, Florida.

The Carolina Panthers and the LA Chargers followed at No. 5 and No. 6. The teams flipped spots from the previous poll.

The Pittsburgh Steelers, who open Week 10 when they host the Panthers on Thursday night, remained at No. 7.

The Minnesota Vikings and Houston Texans each moved up a spot to No. 8 and No. 9 as they enter their bye weeks. The Texans have won six in a row after a 0-3 start.

And the Chicago Bears climbed five spots to round out the top 10 after their 41-9 rout of the woeful Buffalo Bills.