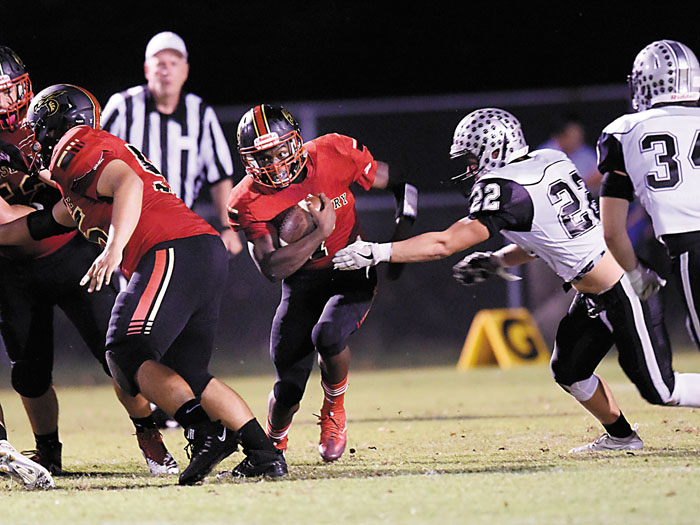 Salisbury head coach Brian Hinson sat on a bench in a deserted locker room in the aftermath of a crushing, 49-13 loss to North Davidson and tried his best to put what has become an insane football season in perspective.

“We’ve played West Davidson on a Wednesday, Ledford on a Monday and North Davidson on a Thursday,” Hinson said with a groan. “Whatever happened to Friday Night Lights?”

Football coaches are creatures of habit, and it doesn’t matter if we’re talking about Hinson or TV’s Eric Taylor inspiring the Dillon Panthers on Friday nights with catchy slogans such as “Clear eyes, full hearts, can’t lose!”

Routine is everything for coaches, who make a seven days per week commitment every fall, with every minute planned. There’s film work and laundry on Saturday and game-planning on Sunday, followed by carefully crafted practice schedules on Monday, Tuesday and Wednesday, leading up to jayvee games on Thursday and varsity games on Friday.

But 2018 will be remembered as the season when there was no routine.

Hurricanes Florence and Michael, plus last weekend’s relentlessly dismal weather, made a shambles of the schedule. Varsity and jayvee.

And don’t dismiss those jayvee games. They’re important as program-builders, confidence-builders and fundraisers. Jayvee football probably is still holding off volleyball as the second-best attended fall sport, and the jayvees have basically played this year on whatever day their games can be squeezed in — or not at all.

Even this week, with a less than dire forecast for tonight, there’s been some rescheduling.

The Concord-A.L. Brown “Bell Game,” still one of the state’s biggest rivalries even in a down year for both programs, has been shifted to Saturday at Concord’s Bailey Stadium at 6 p.m.

On the original schedule, this was supposed to be the final night of the regular season, but the NCHSAA had no choice but to extend the regular season an extra week to allow teams in the eastern half of the state a chance to make up Florence-fueled postponements.

North Rowan will play at North Moore next Thursday, Nov. 8, in what is almost certain to be the Cavaliers’ last action for a while. North Moore requested to get that one done on Thursday, so that’s when they’ll play it.

The Cavaliers, who will go 9-2 unless something truly amazing happens, are in line for a bye in the first round of the 1AA state playoffs. There are byes in 1A, 1AA, 4A and 4AA, where 48 teams make the playoffs. There are 64 in the 2A, 2AA, 3A and 3A brackets, so no byes.

Next Friday, Nov. 9, Salisbury will host Oak Grove in a Central Carolina Conference game postponed due to medical concerns at Oak Grove. Also next Friday, Statesville will play at East Rowan in a weather-postponed game that will have a lot of bearing on who wins the title in the North Piedmont Conference.

An entire round of Central Piedmont Conference games was pushed back to next Friday. Davie County will be at home against unbeaten East Forsyth, one of the state’s best teams.

The only local teams who plan to wrap up the regular season tonight, on schedule, are West Rowan, South Rowan and Carson.

South Rowan, Carson and Davie are not projected to make the playoff brackets, although it’s possible their fortunes could be altered by upset wins tonight.

A.L. Brown projects to make the 3AA playoffs as a road team, with West Rowan and East Rowan looking at first-round home games in the 3A playoffs if they keep winning.

If it wins its last two games, Salisbury projects to get a first-round home playoff game in 2A.

Carson also is home, taking on South Iredell. Josh Trexler will again guide the Cougars after Joe Pinyan announced this week he’s embarked on a leave of absence that will take him into retirement.

East Rowan should log its sixth win — and third in a row — tonight at North Iredell, while West Rowan goes to Greyhound Hollow to play Statesville in what should be the game of the night.

The Hornets (5-4, 5-2 CCC) and Raiders (3-7, 3-5 CCC)  have the county’s least consistent running games, but both have mobile quarterbacks who can make big plays.

Salisbury has the edge defensively.

Salisbury also has Cameron Gill, who is enjoying one of the great special-teams seasons in world history. Even with the county’s worst offensive numbers, in terms of yards gained, the Hornets are averaging a respectable 23.6 points per game. That’s largely due to Gill, who has accounted for 42 points on defense and special teams.

Having said that, the 2018 South Iredell squad bears little resemblance to the NPC-champion powerhouse of 2017.

South Iredell struggled in losing at East Rowan, and while the Vikings are still very much in the running for the NPC championship, both of their league wins (double overtime against West Rowan and 20-19 against Statesville) obviously could have gone the other way.

In other words, Carson has a chance tonight. The Cougars (3-7, 1-3) just have to limit turnovers and pound the ball on the ground at South Iredell the way that East did.

East (5-4, 2-1 NPC) is on the road in Olin, but it shouldn’t have much trouble with a North Iredell squad (3-6, 0-3 NPC) that already has been trampled by Carson, West Rowan and Statesville.

The Mustangs may be a bit rusty after not playing last week, but Sammy Pinckney and Sam Wall could put up huge numbers.

A win keeps East in the running for the NPC title, with one left to play.

This shapes up as a very even game, with West Rowan (6-4, 3-1 NPC) and Statesville (6-3, 2-1 NPC) both in the tussle with East Rowan and South Iredell for the conference championship.

West has been a rejuvenated team offensively the past month— scoring 35, 41, 49 and 35 points. Jaden Perry (he’s over 1,000 yards now) has run wild the past three weeks to balance the offense.

West is also using sprinter Jalen Houston in the backfield some now, which is scary for opponents. He had over 100 yards on just three carries last week.

Statesville has fantastic defensive numbers and plenty of team speed, but West is due to win a big one, and I think this will be it.

West leads the series 12-7. Statesville logged a 34-24 win in Mount Ulla last season in what will be remembered as the “Bryant Young Game.”

This looked like a routine victory for the Wonders (5-5, 1-3 SPC) until Concord (1-9, 0-4 SPC) pushed unbeaten Northwest Cabarrus last week.

Now it looks like Saturday’s “Bell Game”  might get interesting, but look for Jordan Medley to lead the Wonders to a road victory.

This is the 89th time teams representing Concord and Kannapolis have met on the field.

Concord leads 43-41-4 in what has been an amazingly competitive all-time series. The Wonders won last season, 14-12.

Still, the War Eagles (3-6, 0-3 Central Piedmont Conference), who are allowing 34 points per game, are underdogs against the Raiders (6-3, 1-2 CPC) in Pfafftown tonight.

Reagan’s most recent win in the series was in 2015.