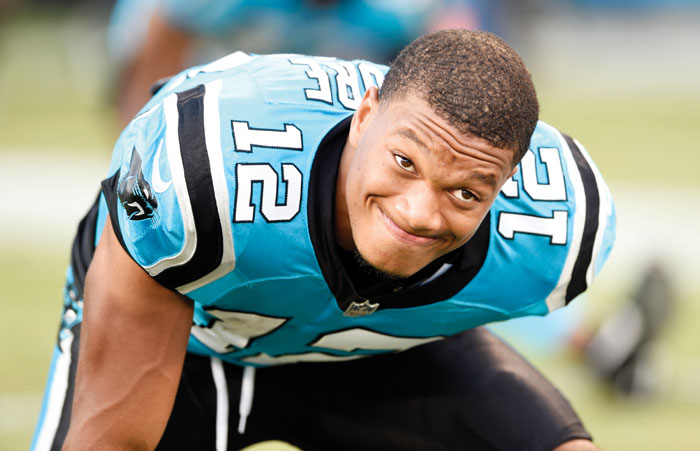 FILE - In this Aug. 24, 2018, file photo, Carolina Panthers' DJ Moore (12) warms up before a preseason NFL football game against the New England Patriots in Charlotte, N.C. Despite two costly fumbles in a 23-17 loss to the Washington Redskins last Sunday, the Panthers say they still have confidence in Moore and will continue to develop the first-round pick. (AP Photo/Mike McCarn, File)

CHARLOTTE (AP) — The Panthers drafted wide receiver D.J. Moore in the first round this past April because of his ability to make plays after the catch.

But Moore’s gift for turning nothing into something got him into trouble last Sunday after fumbling twice — once following a reception and again on a punt return — while fighting for extra yards. The Redskins turned those two turnovers into 10 points and defeated the Panthers 23-17.

The Panthers are not fazed by the miscues, and coach Ron Rivera plans to continue to target the speedy Moore.

“This is all about building confidence,” Rivera said. “D.J. is going to be a part of what we do for a long time. …. I’m not too concerned about punishing players for making mistakes as much as we are about developing and making sure they are learning and growing.”

“Young guys have to learn the hard way sometimes,” Panthers offensive coordinator Norv Turner said. “There is a certain way you have to carry the ball when you are in traffic. You do have to understand, particularly on the punt return, that there are five guys around you, and you are not getting out of that mess — so just get down.”

Moore is hoping a return to his hometown of Philadelphia on Sunday will help turn things around.

“Every time I get the ball I just have to have two hands on the ball once I get in traffic,” Moore said.

The Panthers (3-2) would have a tough time keep Moore off the field because he is so dangerous when he has the ball.

He showed off his speed, quickness and big-play potential in Week 2 when he caught his first NFL pass over the middle from Cam Newton and turned it into a 51-yard touchdown, seemingly shifting to a different gear while outrunning the defense to the end zone.

But he’s drawn some criticism early this season because his numbers don’t match up to Atlanta wide receiver Calvin Ridley, who was drafted 26th overall — two spots behind Moore. Moore has 10 receptions for 162 yards and one score in five games. Ridley has 22 catches for 349 yards and six touchdowns in six games, although he has the luxury of playing opposite one of the game’s best wide receivers in Julio Jones.

Panthers wide receiver Devin Funchess said any concern over Moore is unwarranted, and that people simply need to allow him to develop.

“I tell him all of the time, he’s an athlete. He’s a playmaker,” Funchess said. “When he breaks a tackle, you all love him; if he drops the ball you all hate him. But once he gets in a rhythm and gets comfortable he’s going to be all right.”

The even keel Moore doesn’t let much get to him, and he’s not about the start now.

Moore said most of his family is outspoken, but he and older brother don’t show their emotions too often. He doesn’t watch any NFL games when he’s not playing, instead spending his free time watching cartoons on Nickelodeon or the Disney Channel. Panthers quarterback Cam Newton dubbed him “Sleepy” because he looks like he’s about to fall asleep.

So the 6-foot, 215-pound Moore isn’t stressing over a couple of mistakes.

“I just have to go out there and help the team win and not turn the ball over,” Moore said. “That’s the main goal for this week.”