College football: Catawba falls to 1-5 with loss at Wingate 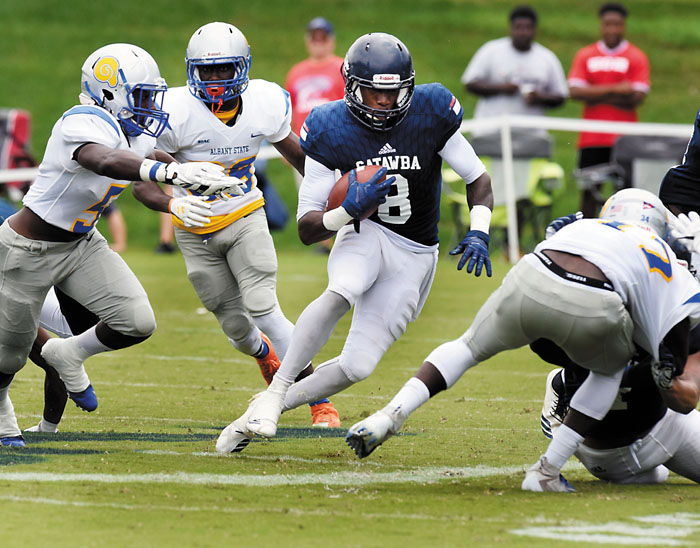 WINGATE — Another Saturday, another tough loss for the Catawba Indians.

Catawba fell 35-25 to frequent nemesis Wingate in a night game at Irwin Belk Stadium. The injury-plagued Indians (1-5, 0-3) had their chances, but came up short in another South Atlantic Conference contest.

The last time Catawba started 1-5 was in 1994, so this isn’t business as usual. It may get worse before it gets better. Catawba, 9-2 last season, figures to be the underdog in three of its four remaining games,  including next Saturday’s 1:30 p.m. homecoming contest against Tusculum (4-2, 3-1).

“I commend our guys for continuing to fight right down to the end tonight,” Catawba head coach Curtis Walker said. “We were enthusiastic and we never stopped plugging away. But we made too many costly mistakes to win.  Too many mistakes to overcome.”

With Reid Carlton on the shelf, redshirt freshman Ken Avent III quarterbacked the Indians for the second straight game. Not surprisingly, it was a mixed bag for the young QB. The positives were 275 passing yards, three TD passes and 105 net rushing yards, but the downside was four interceptions.

Those four picks were huge in the loss, although it wasn’t all on Avent. He had to put the ball in the air 42 times and he was heavily pressured.  Catawba couldn’t establish any sort of running game to slow down Wingate’s pass rush, and Catawba was playing uphill after the Bulldogs (4-3, 1-2) scored three touchdowns in the second quarter to take a 28-10 halftime lead.

Catawba’s running backs had negative rushing yardage for the game.

Catawba struck first. Avent to burner Will Sweeper for a 38-yard score, and the Indians led  7-0 before fans settled into their seats.

Wingate got even at 7-all on the first of QB Shaw Crocker’s four touchdown passes.

Then the Bulldogs owned the second quarter. There were two Crocker aerial TDs in the period, and Wingate added a defensive TD when end Cal Hanford scored on a 52-yard pick-six.

Catawba needed a Lee Brackman chip-shot field goal to get to halftime down, 28-10.

The Indians regrouped at the break, made defensive adjustments.

Wingate got more conservative on offense in the second half, as the teams battled through a scoreless third quarter.

Early in the fourth quarter, Catawba made a move, with Avent hitting a streaking Dre Dunbar for a 37-yard touchdown. That got the Indians back to 28-17 with 14:11 remaing.

When Catawba’s defense went and got another stop, Catawba had the momentum and had a serious chance to rally.

But on a second-and-10 play from the Catawba 33, Wingate linebacker Robbie Wallace picked off Avent at the Catawba 40. The Bulldogs quickly turned that short field into the back-breaking touchdown that made it 35-17 with 11 minutes to go.

“We had a good chance, had momentum, had time and some things going our way,” Walker said. “That was a big interception. That interception and the touchdown that followed sealed our fate.”

Wingate milked a lot of clock, and Catawba couldn’t score again until there was only 1:36 remaining. Again it was Avent to Sweeper for the six points. Catawba added a 2-point conversion with Joseph Dress making a catch in the end zone. That made it a 35-25 game, and the Indians were within 10 points. Getting all the way back was highly unlikely, but stranger things have happened.

Catawba’s ensuing onside kick was well-executed by Brackman, caroming off the chest of a Wingate player toward onrushing Indians. But the ball trickled out of bounds before the Indians could make the recovery.

“Great kick by Brackman, but a tough break,” Walker said. “We haven’t gotten many breaks lately, but we’ll look forward to the day when we do. We’ll continue to battle as hard as we can.”

NOTES: Wingate has won nine of the last 11 meetings with Catawba. … Wingate rushed 45 times for 193 yards. … Catawba got 13 tackles each from linebacker Jeremiah Ferguson and safety Mike Miller. Cornerback Caleb Allen and nickel back Jeremy Addison had interceptions for Catawba. Cameron Davis and Jordan Hemingway had two sacks each. … Wingate managed to overcome 17 penalties for 185 yards.