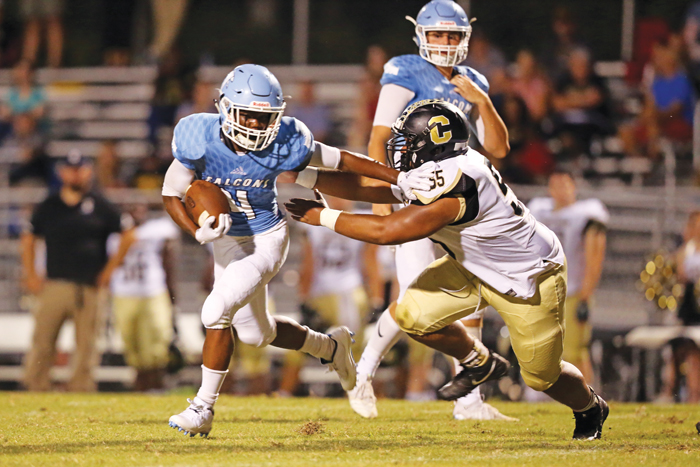 MOUNT ULLA — Always a streak when it came to pure speed, West Rowan senior back Jaden Perry has made the transition to running with a nasty streak.

Three trips to the end zone in the first 20 minutes of Friday’s 44-30 win against Concord provided proof that Perry (5-6, 150) is playing big for his size. He’s getting the positive outcomes that he and the Falcons want to see.

West’s first offensive snap against the Spiders was run by Perry for 7 yards. The second snap was Perry powering for 9 more. He produced scoring bolts of 3, 16 and 9 yards in a hurry.

Concord made adjustments at the break, but the second half opened with Perry barreling for another 15 yards.

When an offensive line and running back are clicking, they never touch except maybe to high-five. There’s just a seam, a crease or a gap created by the big guys, and then a back zipping through that space at full speed. That’s how it went on Friday.

“I thought what happened was mostly our offensive line playing their best football, very good football,” Perry said. “They made nice holes, and all I had to do was read the blocks and hit those holes. It’s taken me a long time to get used to the style of play at West Rowan, but now it’s getting easier.”

As strong as West’s passing game is — and it has been the county’s best to this point — this is still a team that wants to run the ball first and needs to run the ball first. If West can run efficiently, then the aerial stuff becomes really simple for accurate QB Payne Stolsworth and receivers Jalen Houston, a crisp route runner with blazing speed, and Davis Tadlock, a possession receiver who catches anything he can touch.

“We want to attack teams physically in the running game, but we haven’t really been able to dominate the line of scrimmage the way we’d like to until Concord,” West head coach Joe Nixon said. “Jaden didn’t just put the ball in the end zone three times, he got a lot of real tough yards. He trusted his offensive linemen and hit holes hard. Concord’s linebackers are good at running plays down, so we tried to go straight at them.”

Perry was a North Rowan Cavalier as a sophomore. That’s a program known more for wheels and athleticism than for blue-collar offensive linemen, and Perry was an impactful player. He had kickoff return touchdowns that helped wipe out Carson and Thomasville. He also had 40 carries for 287 yards, although he was the third back, getting fewer carries than star Jaleel Webster and Jayden Jones.

Both Perry and Jones transferred to West prior to the 2017 season. They joined incumbent Martavio Rankin to form a productive rushing trio, but there were three games — losses to Davie County, South Iredell and Hunter Huss in the playoffs — when the Falcons, who went 6-6, couldn’t move the ball on the ground at all.

Perry, a 4.4-4.5  runner, was the third guy again last season. He managed 85 carries for 430 yards and two TDs, plus 12 catches for 204 yards and a score against his former teammates at North Rowan.

Heading into his senior year, Perry was clearly the first-string back for the first time in his high school career.

“That just meant I worked harder than I’ve ever worked in the off-season,” Perry said.

West (3-2) believes in him. There’s been tough sledding, at times, especially in the losses to Mooresville and A.L. Brown, but Perry’s rushing numbers have slowly climbed. From 36 yards on opening night, to 61 in Week 2, to 76 against the Wonders, to a career-best 97 last week. In every game he’s had the same workload, between 16 and 18 carries. Not too much for a 150-pounder, but for the first time in his career, not too little.

“We’ve played some very good teams, a tough schedule, but I’d say A.L. Brown was the toughest to run against,” Perry said. “They have so much speed, speed across the board.”

Perry has five rushing TDs this season and he has 322 rushing yards on 84 carries, right at 4 yards per carry. He surpassed 1,000 career yards on Friday.

His first 100-yard game also would have happened on Friday, but he missed some action with cramps, due to the heat and humidity. Dylan Sigmon kept things churning for the Falcons’ offense and got his first two varsity TDs.

Sigmon’s two scores made it five rushing TDs in one night, like old times for the Falcons. Concord was committed to stopping West’s passing game, so the Falcons did what they needed to do.

Perry didn’t lose yardage on any of his 16 carries, although he had to fight to get back to the line of scrimmage on one. There were no long jaunts, no home runs. That 16-yard TD burst late in the first quarter to make it 14-0 was his longest gain of the night, but there were a lot of steady 6s and 7s.

Perry showed some tenacity in the passing game as well as when he carried the ball.

“There were plays where he had to block linebackers in pass protection, and he did his job,” Nixon said. “He’s come a long way. He’s getting a little better every week, and that’s what we want to see from him and our team.”

Terrell Dawkins, a 6-4, 235-pound defensive end who is committed to N.C. State, anchors the Chargers’ defense. He’ll  provide a formidable obstacle for West’s blockers and Perry, but the Falcons will have to run the ball effectively to have a chance.