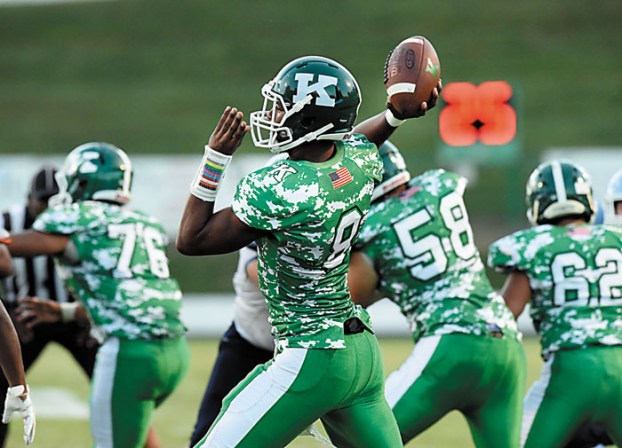 By contrast, A.L. Brown quarterback Jordan Medley, receiver Nick Lyerly and defensive end Atlante Johnson — three seniors for the Wonders — will cherish last night’s performance.
The Wonders (4-2) scored three first-half touchdowns in a span of 4:34, rang up four second-half TDs in seven and a half minutes and went on a 49-7 run in less than 16 minutes to torch Davie, 56-27.
Medley tore up Davie’s beleaguered secondary, going 16-of-23 for 251 yards and three TDs, while averaging 10.9 yards per pass attempt. Lyerly hauled in seven receptions for 124 yards, and Johnson ripped the ball away from Davie and returned the fumble 83 yards for a back-breaking score in the third period.
The 3-3 War Eagles’ dreary showing saw them give up the most points in 41 games, dating to a 56-14 loss at Dudley in 2015. Brown also dealt them their worst defeat since that Dudley game.
The War Eagles started well enough, with some help from the Wonders. Peyton Hampton’s 38-yard punt hit a Wonder and Davie recovered at the Brown 1-yard line. Quarterback Nate Hampton flipped over the line on third down as Davie jumped ahead, 7-0.
Brown responded with an impressive 11-play, 93-yard drive to tie it at 7-7, but Davie regained a 13-7 lead on Hampton’s slant to Jack Reynolds, who broke a tackle at the Davie 44 and raced 68 yards to the end zone.
Scoring early has not been advantageous for the War Eagles, who have struck first in all six games but are 2-4 on the field (a loss to Page became a forfeit win).
After taking the 13-7 lead, Davie fell to pieces. Brown went 92 yards in 15 plays to retake the lead, Medley hooked up with Antonio Knight for a 47-yard score and Knight’s 37-yard reception set up a TD that made it 28-13.
Davie showed some fight late in the half. On fourth-and-3, running back Josh Robinson, who had 122 rushing/receiving yards, burst 11 untouched yards to pull the War Eagles within 28-20 at the half.
But Brown sent a message at the start of the third. After Lyerly made a one-handed circus catch for 35 yards, Medley found Vargas behind the defense for a 19-yard TD that made it 35-20.
Davie found life as it drove from its 20 to the Brown 22, but Johnson deflated Davie by ripping the ball from Hampton as he getting gang tackled at the Brown 17. Johnson took off down the Davie sideline, easily scoring on the 83-yard fumble return. At 42-20, the floodgates were open.
Then the Wonders threw knockout blow after knockout blow. Moments after Johnson’s defensive gem, Amareon Plummer intercepted at the Davie 20, setting up Jaron Cooper’s short TD run. Less than four minutes later, Medley broke a 31-yard TD on a QB draw.
It was 56-20 late in the third, and Brown coach Mike Newsome inserted backups at the start of the fourth quarter. The Wonders averaged 4.7 yards on the ground and finished with 421 total yards. They’ve put up 98 points in two games.
For Davie, Hampton threw for 185 yards, but Brown forced 18 incompletions and seven of his 14 completions went for 4 yards or less. The War Eagles had 320 yards, but 128 of those came on two plays. They went 4-for-13 on third down and punted seven times. Their secondary is reeling, having allowed 15 TD passes in six games.
Davie coach Tim Devericks has a bye week to put things back together. Its Central Piedmont Conference opener is Oct. 5 at Reynolds.

By The Associated Press Yuli Gurriel hit a grand slam and a two-run homer on his way to a career-high... read more