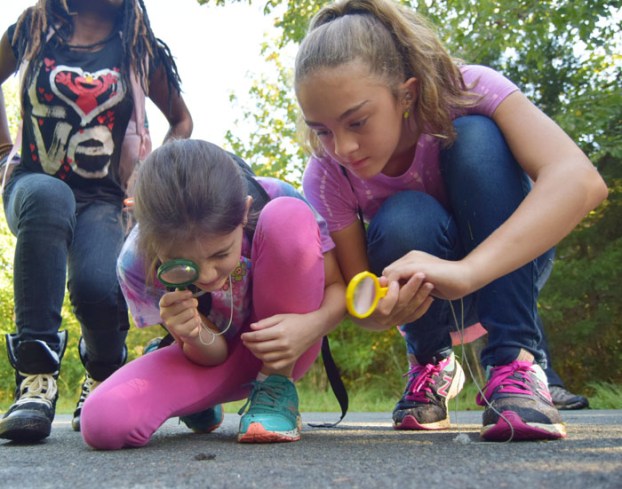 Students lean in for a closer look after finding a beetle on the greenway near Overton Elementary. Wednesday was the group's first experience day with Muddy Sneakers, an evironmental education non-profit that partners with seven Rowan-Salisbury Schools. Rebecca Rider/Salisbury Post

Up close and personal: Muddy Sneakers introduces students to nature

SALISBURY — It’s a dewey Wednesday morning as Overton Elementary fifth graders hike through the Greenway. Their sneakers leave trails in the wet grass as they veer off the path to peer into puddles, pick up leaves or lean in close to examine ants, spiders or beetles.

Wednesday was Overton’s first official Muddy Sneakers expedition of the school year — and with the ground still soggy from last week’s hurricane, it lived up to its name. Muddy Sneakers, a non-profit, science- and nature-focused education organization, works in seven Rowan-Salisbury Schools, and introduces nearly 600 local fifth graders to the great outdoors each year.

It’s an opt-in program that takes classes on excursions to parks and preserves and teaches students the importance of respecting and appreciating nature. But it’s not just about pristine wilderness, Program Director Cynthia Peedin said.

“It’s also about what’s in your backyard, as well,” she said.

Rowan County has a wealth of natural areas for students to explore. From local parks, to the woods surrounding school campuses to the greenway. All of it is ready to explore — and, often, it’s a new experience.

“Kids find out things that were in their own backyard that they’d never seen before,” Peedin said.

Each of the seven Rowan-Salisbury Schools partnering with Muddy Sneakers spends two of its outdoor excursions exploring the area around its campus. For Overton, that meant a walk on the greenway. Wednesday morning fifth-graders donned their sneakers and backpacks, and slung magnifying glasses around their necks before setting out on the wooded path.

This first excursion is an introduction to Muddy Sneakers, and to the outdoors. However, students participating in Muddy Sneakers are also learning science basics that reinforce classroom lessons.

In addition to learning about leaving no trace and respecting wildlife, students learn about energy, or study a pond to learn about the water cycle or learn about physics by hoisting a bear bag into a tree. The lessons align with state standards for fifth grade to help prepare students for the science end-of-grade test. Teachers have also reported that students pay attention better, or are better behaved, following a Muddy Sneakers excursion. And, according to a study in partnership with N.C. State University, students involved in the Muddy Sneakers program show improvement in science scores, and the program is linked to an increased interest in science and STEM among female students.

But it’s more than that. The all-day excursions are specifically taken to public, free parks and protected lands with the hope that students will be able to visit them again.

“So, hopefully, in 20 years they can go back,” Peedin said. “And hopefully they’ll remember their Muddy Sneakers day.”

By Rebecca Rider rebecca.rider@salisburypost.com SALISBURY — A lot has changed at Rowan Helping Ministries this year. The non-profit, which mans... read more