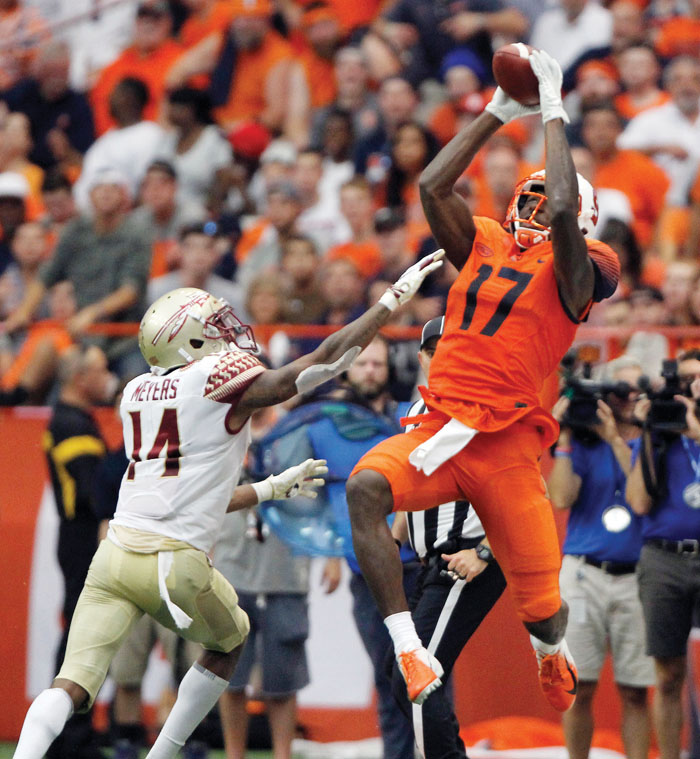 SYRACUSE, N.Y. (AP) — Syracuse took another big step toward putting the woeful recent past in the rearview mirror.

Quarterback Tommy DeVito, subbing for injured starter Eric Dungey, scored on a 3-yard run and hit tight end Ravian Pierce with a 3-yard score in a span of just over 3 minutes in the third quarter, and Syracuse beat Florida State 30-7 on Saturday in the sweltering heat of the Carrier Dome.

“They really played their heart out,” said a hoarse Syracuse coach Dino Babers, who led another rousing postgame locker room celebration. “I thought it was a fantastic family win. Those guys (FSU) are the top athletes in the country. To get a win like this, we need to enjoy it.”

Dungey was hurt late in the second quarter and never returned as the Orange took a slim 6-0 lead into the break. Babers said afterward that Dungey was suffering blurred vision from a poke in the eye and expected him back.

The absence of the Orange’s fiery leader didn’t matter one bit on this day against the Seminoles (1-2, 0-2 Atlantic Coast Conference), who were unable to generate much of an attack against the inspired defense of the Orange (3-0, 1-0).

“I thought the other elements (defense and special teams) were playing really, really well,” Babers said. “I thought that if they came in and managed the game we would have a chance.”

Syracuse recorded four sacks, deflected a couple of passes, and constantly harassed quarterback Deondre Francois, who finished 18 of 36 for 178 yards passing with one interception while leading an offense that gained just 240 yards. FSU also was called for 11 penalties for 90 yards.

“We keep on making mistakes at every position (on offense),” Francois said. “We got to be in sync and come together as one unit. Right now, we’re just making little mistakes. We’re taking turns — either receivers, quarterback, running back, tight end, O-line. We keep taking turns and it’s killing our drives.”

DeVito, a redshirt freshman with limited experience in the first two games, exhibited great poise in guiding the Orange in the second half as they snapped a five-game conference losing streak. He had completions of 33 yards to Jamal Custis and hit Pierce with a swing pass for 22 more before scoring his first career touchdown on a keeper up the middle midway through the third quarter.

“It was the same stuff in practice,” DeVito said. “All the guys rallied behind me.”

DeVito, who finished 11 of 16 for 144 yards and no turnovers, gave the Orange a commanding 20-0 lead with his toss to Pierce with 3:33 left in the third. FSU had not allowed a point in the third quarter and just 10 second-half points in splitting the first two games against then-No. 20 Virginia Tech and FCS foe Samford.

Florida State prevented the shutout on a 2-yard run by Francois with 6:16 to play. The Seminoles were 4-0 in the Carrier Dome entering the game and had won 10 straight games in the series since 1966.

Cam Akers led the Seminoles on the ground with 52 yards on 10 carries and FSU finished with just 62 yards rushing on 23 attempts, a 2.7-yard average.

After DeVito entered the game, he hit Custis along the right side for 16 yards to set up a first-and-goal at the 1, but the Florida State defense stuffed Dontae Strickland on three straight running plays over left tackle, forcing a 19-yard field goal by Andre Szmyt.

Francois got untracked on the final possession of the half and hit Nyqwan Murray for gains of 20 and 16 yards, threading the needle both times among several Orange defenders. But time expired with the Seminoles inside the red zone.

“I still believe in this football team,” first-year FSU coach Willie Taggart said. “We’re not where we want to be or should be offensively. We have a lot of season left. I know people don’t like hearing it and they’re upset. And they should be. We have to do our part and take care of our business as a football team.”

Florida State: The Seminoles have fallen on hard times under Taggart. The offense has sputtered every game. Francois, who missed most of last season with an injury, has only clicked in spurts and the run game has been dismal behind an offensive line that’s trying to find itself.

Syracuse: The Orange are unbeaten and seem poised to finally break out of the rut that has seen them finish 4-8 three straight times. With DeVito emerging and Dungey expected back, Syracuse appears solid at the most important position.

The Orange drove deep into FSU territory late in the first, but Devin Butler fumbled after a reception and Florida State recovered. Syracuse coach Dino Babers challenged the call, it was reversed, but Szmyt missed a 46-yard field goal, his only miss of the season.

Florida State struggled in the opening half in the first two games and the trend continued against the Orange. The Seminoles were called for nine penalties, operated from poor field position, punted six times, and crossed midfield only once before halftime, gaining only 110 yards on 29 plays and failing to convert all seven times on third down.

Fromm and Holyfield play a half, Georgia routs Middle…