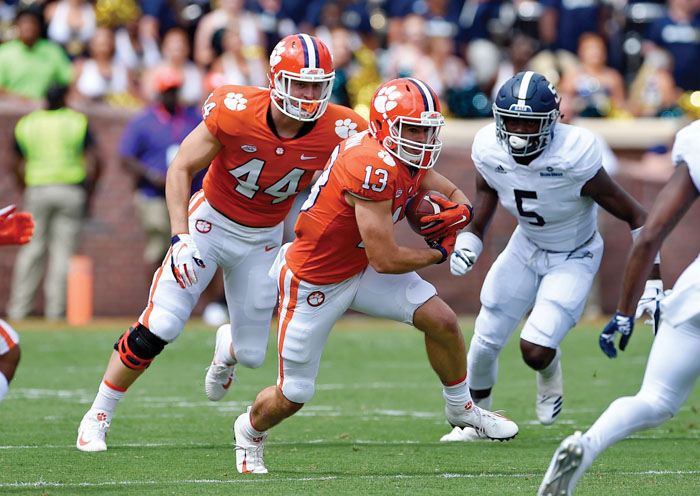 CLEMSON (AP) — No. 2 Clemson and Georgia Southern got a sunny sky, mild breezes and plenty of tailgaters at the start of the only major conference football game played Saturday in the Carolinas and Virginia while Tropical Storm Florence dumped dangerous amounts of rain elsewhere across the region.

Clemson officials moved up the start time to noon from 3:30 p.m. because forecasts called for a more significant impact from Florence on Saturday night and Sunday. By halftime of the Tigers’ 38-7 victory, conditions were changing. Grey clouds hovered over the stadium, with the wind picking up enough to blow around papers and knock ballcaps off heads.

Around Memorial Stadium, about 250 miles from the coast, it otherwise looked like a typical gameday, which made it a rarity in the region, where games were moved, played earlier in the week or canceled because forecasts called for Florence, once a Category 4 hurricane, to bring devastation.

More than 2 feet of rain already had fallen in places, and the drenching continued as Florence practically parked itself over the Carolinas. Forecasters said the torrents could continue for days, and with rivers rising toward record levels, thousands of people were ordered evacuated for fear the next few days could bring the most destructive round of flooding in North Carolina history.

It was the specter of those conditions that caused widespread schedule juggling.

In Blacksburg, Virginia, Virginia Tech’s staff made the most of the unexpected time off. After practices on Wednesday and Thursday, coaches scattered to watch high school football games played Thursday and Friday nights, and coach Justin Fuente gave everyone the day off on Saturday.

Admission was free to the Ohio vs. Virginia game at Vanderbilt Stadium, but the crowd was still expected to be sparse other than gatherings of alumni groups from each university.

He understood the precautionary move, and Virginia’s desire to play the game.

“Virginia needs six wins one way or the other to make a bowl game this year, and Ohio is definitely one of the games on the schedule we were looking at as a must win game,” he said.

East Carolina relocated its team to Florida, worried that potential flooding near its Greenville campus would keep it from practicing or leaving for next week’s game at South Florida in Tampa.

Clemson urged fans to use patience getting to the game because traffic security would be handled mainly by local authorities instead of state troopers. The South Carolina Highway Patrol sent just 16 troopers. Normally, it deploys 100 to 110 on game days.

Citing a high wind advisory for later in the day, Clemson asked fans to take down tailgate tents that could blow free before entering the stadium and to clear the parking lots within two hours of game’s end.

By kickoff, the stands were nearly full with about 75,000 people filling 80,000-seat Memorial Stadium.

Jones said a couple from Charleston typically joins his group as season ticket holders. For this one, Jones’ friends remained in Greenville after evacuating from the coast.

Warren Herndon of Lexington is a season ticket holder who was concerned the storm might affect the game. He’s also got property in Garden City near Myrtle Beach that he’s worried might be damaged by Florence. “There’s just so little you can do,” he said.

Keyanna Snipe, the mother of Clemson starting left guard John Simpson, said her son worried all week about how his family would fare down near the coast in North Charleston. Snipe finally gave into her son’s plea to leave early and she made it to Clemson on Thursday. “He was so happy and relieved,” Snipe said.

Tennessee offered free tickets to its game with UTEP in Knoxville to people from evacuated areas of the Carolinas.

“Believe it or not, I’ve always wanted to come here,” said Hughes, who wore a Coastal Carolina T-shirt and a Clemson ball cap. “I know it’s a nice and neat stadium.”

Tennessee said 1,067 tickets were given to fans displaced by Florence.