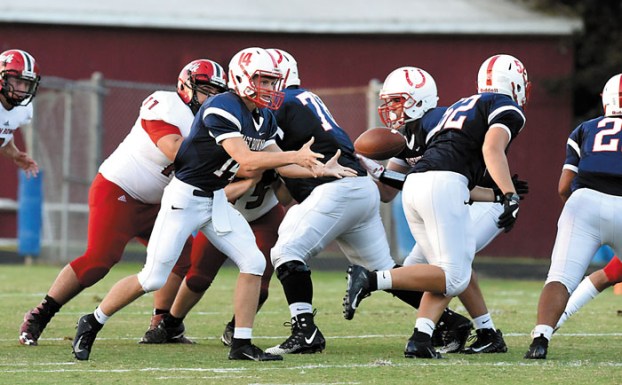 East's QB Logan Forbis tosses the ball to a running back. photo by Wayne Hinshaw, for the Salisbury Post

Fans in the eastern part of the county get excited when the Mustangs are 1-2, so right now they’re extra excited.

Is the excitement justified? Well, yes … and no.

First of all, 3-0 is a pretty big deal.  Research going back to that 1958-1961 era when North Rowan, West Rowan, East Rowan and South Rowan opened, reveals some positive numbers for the Mustangs.

That’s less than one per season,  reasonably exclusive company.

I write “undefeated after their first three games” rather than 3-0 because in the old days before overtime, the result could be a tie. A couple of those fast-starting teams opened 2-0-1, instead of 3-0.

Of the 52 previous Rowan teams that were undefeated after three games, 49 managed to finish to go at least 6-5. So while East isn’t 100 percent sure of a winning season, history puts the Mustangs’ mathematical chances at about 94 percent.

What about those three 3-0 starters that didn’t finish as winners?

That team got to 3-0 by spanking North, Salisbury and East with relative ease. But next came West Rowan, Mooresville, A.L. Brown and four Central Piedmont Conference opponents. The Raiders dropped seven straight before finally applying the brakes to that discouraging skid with a romp over South Iredell in the final game of the regular season. Then South lost to Page in the first round of the 4A state playoffs. For a while, South was 4-8, but Page eventually forfeited its hard-earned 17-14 victory, so the record book now shows South went 5-7.

Coach John Fitz’s East team stands alone as the county’s last undefeated team for the first time since 1989. That year East started 1-0, while the other four county teams lost openers.

1A North Rowan got the better of East in a scrimmage in the Rowan County Jamboree (four touchdowns to two), but a week later, East surprised the gridiron world by beating North Stanly. North Stanly is 1A, but that was a quality win. North Stanly might be a top-1o 1A team.

East’s other two victories on the path to 3-0 were overwhelming on the scoreboard — 42-0 and 56-0 — but a bit underwhelming in reality.  Both of those opponents are 0-2. MaxPreps ranks South Rowan 386th out of 421 North Carolina prep teams and ranks East Chapel Hill 376th.

That explains why there are still more East doubters than shouters if you poll the whole county.

For a lot of reasons, East’s home game with Central Cabarrus tonight is huge. It’s a chance to put everyone in the believer column because nearly everyone is convinced Central is great. 4A Hickory Ridge is good, and Central smacked Hickory Ridge, coached by reigning N.C. AP coach of the year Sam Greiner. MaxPreps ranks Central’s Vikings 30th in the state. That’s not 30th in 3A, that’s 30th out of all 421.

Former East Rowan coach  McClamrock coaches the Central machine, which adds to the emotion. Central star Derek Boykins (6-1, 224) is one of the state’s most touted players and is a South Carolina commit.

While it’s 3-0, East won’t have any problem retaining the proverbial chip on its shoulder. There are 21 3A teams that have started 3-0. MaxPreps is yawning over the Mustangs’ hot start and ranks East 19th out of those 21.

All told, East is ranked a modest 53rd in 3A by MaxPreps, behind a bevy of 2-1 teams and even some 1-2 teams. Central, which clobbered Piedmont and Mount Pleasant in addition to its marquee triumph against Hickory Ridge, is ranked 11th in 3A by MaxPreps.

The picks were 2-1 last week and are 11-3 for the season. They would’ve been 3-1, but North Rowan played Lexington on Thursday, so my opinion didn’t count. West, Salisbury and South were off.

After a quiet week that was the lull before the storm, this is the most exciting Friday so far, with a flurry of major matchups. Besides Central Cabarrus at East Rowan, there’s West Rowan (1-1) at Davie County (1-2); A.L. Brown (2-1) at Mooresville (2-0), and Salisbury (0-2) at Thomasville (2-0). All three matchups feature quality rivalries with lots of history.  Kickoffs are at 7:30 p.m.

Tough week to pick. This may be an 0-6 Friday, but here goes:

Central Cabarrus 28, East Rowan 14: Central’s win over Hickory Ridge is too impressive to ignore. Hickory Ridge dismantled Concord and Robinson. The Mustangs are legitimately good, but this is a tall task.

Mooresville 21, A.L. Brown 17 — Mooresville won with defense against West Rowan and  won with offense against Davie County. This one should go to to the wire. The Blue Devils have the home-field advantage.

Davie County 28, West Rowan 20 — Davie can’t be figured out. I flipped a coin. It’s a really big game for the Falcons. If they’re going to get back where they want to be, they need this one.

North Rowan 17, Carson 14 — While North has absolutely mauled the Cougars the last two seasons — 45-3 and 37-6 — this may be the thriller of the night. North QB Willis Mitchell (shoulder) is unlikely to play, and he threw for 200 yards against the Cougars last season. Quintous Smith Jr, a really good athlete, is ready to step in, but North’s offense becomes more dependent on the legs of Malcolm Wilson, the county’s leading rusher.

Carson can move the ball  and the chains — 250 rushing yards against A.L. Brown last week — and the Cavaliers, who aren’t deep,  may have their hands full with a small army of quick backs.

East Davidson 28, South Rowan 21 — East Davidson lost its most recent game, 44-0, while South Rowan lost, 42-0. I have no idea what’s going to happen. This is the first of nine CCC games for the Raiders. They’ve got a reasonable chance.

Thomasville 24, Salisbury 17 — The Bulldogs are tough to beat at Cushwa Stadium, even when they’re not good, and it looks like they’re back to being pretty good. They beat West Montgomery by 24 in their most recent outing. Salisbury has only scored two TDs in two games. That puts a ton of pressure on the defense. WSAT Memories 1280 will carry the action.

By Mike London mike.london@salisburypost.com SPENCER  — The position where North Rowan could least afford an injury was quarterback. The Cavaliers’... read more