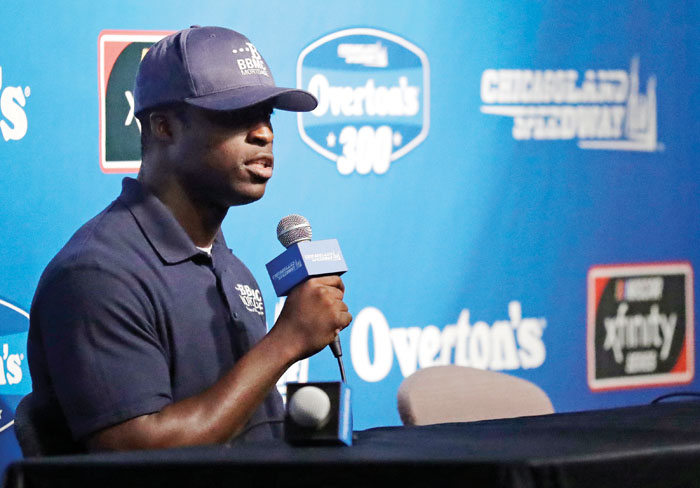 AP Photo/Nam Y. Huh ... Jesse Iwuji speaks at a news conference for the NASCAR Cup series auto race at Chicagoland Speedway in Joliet, Ill., Friday. Iwuji is drawing praise for helping a family of four stranded on the shoulder of Interstate 5 in California last Sunday.

JOLIET, Ill. (AP) — Jesse Iwuji was driving home last weekend when he encountered a potentially dangerous situation on the side of the road.

That’s when his training took over. His Navy and NASCAR training.

The 30-year-old Iwuji is drawing praise for helping a family of four stranded on the shoulder of Interstate 5 in California last Sunday. Iwuji, a NASCAR driver and lieutenant in the Navy, ushered the family away from their minivan before it burst into flames.

“Everyone says this is heroic,” Iwuji said Friday. “For me, honestly, it’s just being a good person.”

Iwuji finished 15th in the K&N Pro Series West race at Sonoma last Saturday, and then stuck around to watch the NASCAR Cup Series. He was near the end of his six-hour drive home when he saw the minivan and the family standing nearby.

“They were kind of going in and out of the van and underneath I saw a lot of fluid leaking from the motor and there was a small little fire that began to light,” he said. “Me, just from my background, military and also racing, we all know that flammable fluids can ignite pretty quick and start a huge fire pretty quick, so just instinctively I just stopped on the side of the road and I ran over to them.”

Iwuji said his first thought was something he was taught in the Navy: “Ship, shipmates, self.” He tried to find a way to move the minivan away from the liquid, but it didn’t work out. He then helped the parents and two siblings relocate further down the road.

“I turn around and then the motor just ignites,” Iwuji said. “Just turns into this ball of fire and flame.”

Iwuji was worried about a potential brushfire, but the fire department put it out before it could spread further than some burning grass in the area.

Iwuji, who also played college football for the Naval Academy, said he remembers only one other person stopping to check on the situation while he was helping the family. So he posted a video of the burning minivan on social media in an effort to encourage people to help others.

Iwuji’s story took off from there. He said he had no idea it was going to attract so much attention.