A new course for Tiger Woods, and maybe a new putter 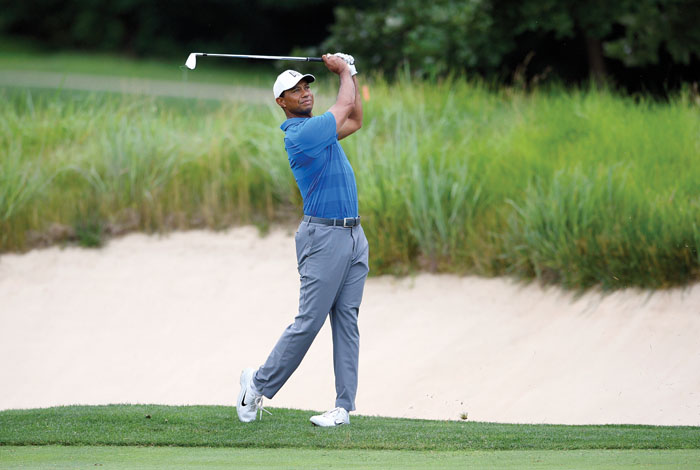 POTOMAC, Md. (AP) — Tiger Woods is playing the Quicken Loans National for the last time, and so much about this year feels new.

Woods played his first 18-hole round at the TPC Potomac at Avenel Farm during the pro-am Wednesday, and it didn’t take long to realize why the course rated as the fourth toughest to par last year on the PGA Tour, behind only three majors.

“It’s certainly a lot more difficult than what I had envisioned,” Woods said. “They’ve got the rough up, fairways in. It’s like a mini-Open here.”

Woods has been struggling with just about every aspect of putting since March, when he made a brief charge in the final round at Bay Hill until tying for fifth. He missed the cut at the U.S. Open two weeks ago, and last week in the Bahamas he began tinkering with a new putter. The one he used in nine holes of practice on Tuesday, and in the pro-am, was a mallet variety.

“I’m trying to find something that I can feel again like the swing of the putter, getting my body in the right positions and seeing the lines again,” Woods said. “Once I start to get that ball rolling on my lines, then I’ll be back to putting like I was. I just have not been rolling it on my lines. And then on top of that, when they don’t roll on lines, then I have a hard time seeing my line. It’s a vicious cycle.”

Whether it goes in his bag on Thursday remains a mystery.

“Tiger had three putters on the putting green before I walked in here,” Billy Hurley III said.

Woods is the only two-time winner of the National, both times at Congressional a few miles down the road. He hasn’t played the event since 2015 when he was struggling with back issues that eventually led to multiple surgeries and kept him out of golf for the better part of two years.

This is the final edition of a tournament that began in 2007 with high hopes, with Woods as the tournament host at Congressional, held around the Fourth of July with a theme built around saluting the military.

Woods’ career took several unexpected turns a few years later, with surgeries to his knee and back sandwiched around the downfall in his personal life. There was a change in title sponsors, a change in dates and the field gradually became weaker.

Rickie Fowler, who has a corporate deal with Quicken Loans, is the only player from the top 10 competing this week. He checks in at No. 8. Quicken Loans decided not to renew its contract with Woods’ foundation, instead sponsoring a new PGA Tour event in Detroit that starts next summer.

Woods couldn’t find another sponsor, and now there isn’t room on next year’s schedule. His foundation still runs the Genesis Open at Riviera in February and the unofficial Hero World Challenge in the Bahamas in early December.

“The support has been fantastic. We just haven’t got the sponsorship dollars,” Woods said.

He would like nothing more than to end the tournament’s 12-year run by winning for the first time in nearly five years, a reasonable task considering how well he has been swinging the club. The trouble has been getting the putter to cooperate.

“He was away from competitive golf for so long,” Fowler said. “It’s not like you just come right back out and go win a golf tournament. But it’s Tiger. It wouldn’t have surprised me. … He knows how to win, so I’m not worried about him by any means.”

This isn’t the first time Wood has tinkered with a new putter, whether it was St. Andrews in 2010 or the Masters the following year. That he might use a different model putter in the middle of his season shows a little of the frustration.

Woods was making putts in Florida, when he had two chances at winning. He has been missing short ones ever since.

“I’m pretty excited the way I’ve hit the golf ball,” Woods said. “If I have the same putting stroke I had earlier in the year, with the ball-striking I’ve had, that would be where I want to get to. Just got to put both those things together at the same time.”

This will be his last tournament until the British Open at Carnoustie, and while Woods has played 10 times already, he is running out of time. He is No. 82 in the world and needs to get into the top 50 after Carnoustie to be eligible for the Bridgestone Invitational at Firestone, a World Golf Championship that he has won eight times.

“I don’t want to play too much, but I need to play enough,” Woods said. “Hopefully, I can pace myself, get into the events and make sure I stay strong enough and fresh enough to play quite a few tournaments.”

SAN DIEGO (AP) — Phil Rodgers, a five-time winner on the PGA Tour who became one of golf’s top instructors, died after a long battle with leukemia. He was 80.

Rodgers died Tuesday morning at his home near San Diego.

Rodgers developed into one of top young players in the 1950s under Paul Runyan at La Jolla Country Club, winning an NCAA title at Houston. He won the 1962 Los Angeles Open for his first PGA Tour title, closing with a 62 for a nine-shot victory.

That also was the pro debut of Jack Nicklaus. They were rivals and friends, and Nicklaus later leaned on Rodgers for help with his short game. Nicklaus gave Rodgers credit for his U.S. Open and PGA Championship victories in 1980.

“We lost one of golf’s greats, one of its most colorful individuals, and one of my dearest friends in Phil Rodgers,” Nicklaus said in an Instagram post.

Rodgers won all five of his PGA Tour events in his 20s, and that included two close calls in the majors. He was at 2-under par with six holes to play in the 1962 U.S. Open at Oakmont and made three bogeys to finish two shots out of a playoff, which Nicklaus won over Arnold Palmer.

A year later, Rodgers lost in a playoff to Bob Charles in the 1963 British Open at Royal Lytham & St. Annes.

Rodgers played his last full season in 1977, and then became an instructor and was listed annually in golf magazines as among the best in the country. Nicklaus recalled how Rodgers got his game back on track.

“At the end of 1979, my game — particularly my short game — was awful,” Nicklaus said. “I called Phil and we worked together in Los Angeles at the start of 1980. He taught me his famous “Figure 8” method and I went on to win two majors that year, thanks to Phil.”

Nicklaus said he last saw Rodgers at a PGA Tour Champions event in Houston this spring.

“He was struggling greatly, but it meant the world to me to see him, even if it was briefly,” Nicklaus said. “I will miss him dearly, just as the game will miss this very special man.”