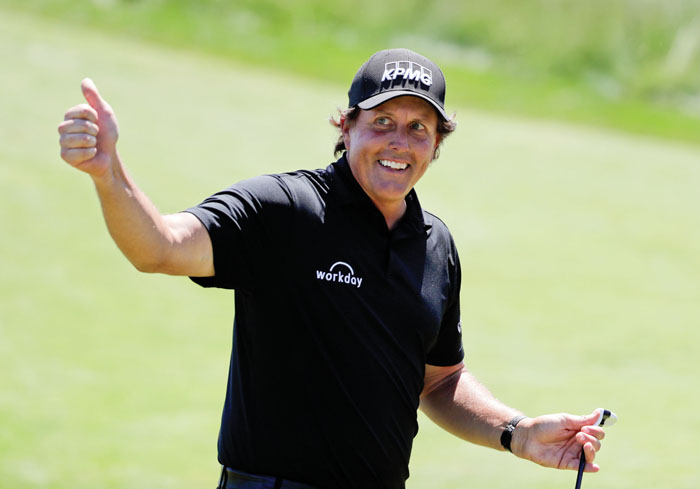 NEW YORK (AP) — Phil Mickelson has apologized four days after intentionally violating golf rules by hitting a moving ball on the green at the U.S. Open, saying his frustration got the best of him.

The apology came Wednesday in a statement released by his representatives.

“I know this should’ve come sooner, but it’s taken me a few days to calm down,” Mickelson said. “My anger and frustration got the best of me last weekend. I’m embarrassed and disappointed by my actions. It was clearly not my finest moment and I’m sorry.”

Mickelson was struggling in the third round when he reached the 13th green.

His bogey putt from above the hole ran by the cup and was headed down a slope when he trotted over and swatted it back toward the hole with the ball still in motion. He was assessed a two-stroke penalty, scored a 10 on the hole and wound up shooting 81.

Later, after acknowledging he was using Rule 14-5 to his advantage, Mickelson called USGA officials for clarification on the rule after hearing suggestions he should be disqualified from the U.S. Open. USGA officials said disqualification was not in order for his violation.

Asked if people would find his actions on No. 13 disrespectful, Mickelson said Saturday: “It’s meant to take advantage of the rules as best as you can. In that situation, I was just going back and forth. I would gladly take the two shots over continuing that display.”

Some observers were upset that Mickelson and playing partner Andrew Johnston were smiling as they walked off the green.

“How can you not laugh?” Mickelson said. “It’s funny.”

SPIETH, OTHERS TRY TO BOUNCE BACK AFTER MISSING US OPEN CUT

CROMWELL, Conn. (AP) — Some of the biggest names in golf missed the cut at last week’s U.S. Open. They’re spending this week in Connecticut looking to fix whatever might be wrong with their game before next month’s British Open.

Jordan Spieth, the defending champion at both this week’s Travelers Championship and next month’s Open Championship, will try to avoid missing the weekend for the third straight tournament.

“In order for (my game) to be ready, major championship ready for the Open Championship, I think being in contention this week would be a big key,” he said. “It’s tough to go win a major championship if you’re not at least coming off of top 10 finishes in tournaments where you had a chance to win.”

A year ago, a previously struggling Spieth shot a 7-under 63 in his first-ever round at TPC River Highlands and went wire to wire, winning the tournament in a playoff. That started a memorable summer that included his first Claret Jug.

He’s looking to become this tournament’s first repeat champion since Phil Mickelson won in Connecticut in 2001 and 2002.

Spieth be joined this week by plenty of others who played just two days last week, including Rory McIlroy, Jason Day and Bubba Watson.

“Missing the cut is definitely disappointing,” Day said. “But, to be able to come back and hopefully do what Jordan did last year would be nice.”

The TPC River Highlands course, unlike Shinnecock Hills, is set up for pin hunting.  The average winning score since Travelers began sponsoring the tournament in 2007 is a 16-under par 264.  Spieth won last year by shooting 12 under.

“Having this tournament right after the tournament last week, I think it gets guys back into the normal routine,” McIlroy said.  “They play a golf course that you can make birdies; you can get on runs. That’s a nice thing.”

The Travelers was selected by the PGA last year as its “Tournament of the Year” and the “Players Choice.”  That has helped attract a 156-player field that includes five world’s top 10 ranked golfers and all four reigning major championship winners: Brooks Koepka, who won his second straight U.S. Open last week; Spieth; Masters winner Patrick Reed; and PGA Championship winner Justin Thomas.

Thomas said he, like most others, isn’t just using this to tune up their game for the next major. They are here to win.

“I’m not here thinking about the (British) Open. I’m not playing this to get my game ready for the Open,” he said. “It’s totally, completely different golf.  But that being said, any time you have the opportunity to get into contention, you can learn from that and use it in future events. Hopefully I’ll be able to learn from a positive experience of some sort this week.”

Spieth has nothing but good memories of this event, creating one of last summer’s most memorable moments when he holed out from a greenside bunker to beat Daniel Berger on the first playoff hole, sparking one of the year’s most replayed highlights: a rake-throwing, chest-bumping celebration with his caddie.

“There are tournaments on the PGA Tour that could be great fits for me and this is one of those,” Spieth said. “I just regret I hadn’t been playing here my entire PGA Tour career.”