Woods has come a long way in the last year 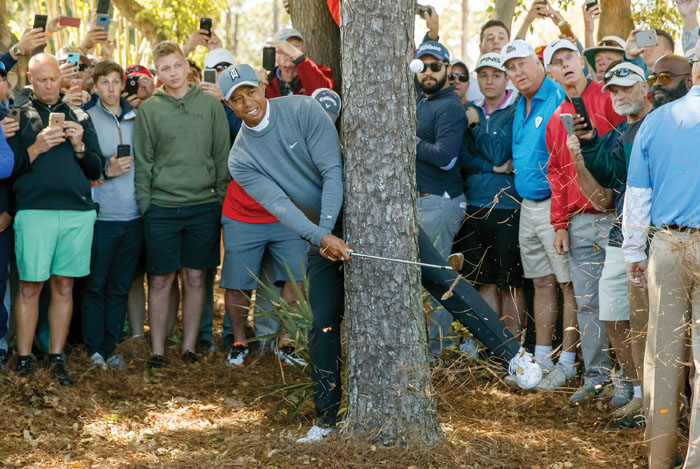 FILE - In this March 8, 2018, file photo, Tiger Woods hits from behind a tree on the fourth hole during the first round of the Valspar Championship golf tournament in Palm Harbor, Fla. Woods' progress should not be measured by the golf he has played the last three months. Instead, consider that a year ago this week, his mug shot from a DUI arrest in Florida made it seem as though he might never be back at this level. (AP Photo/Mike Carlson)

DUBLIN, Ohio (AP) — Tiger Woods has made plenty of progress in his return to golf, especially in the last three months.

Starting with the Honda Classic, 19 of his 24 rounds have been at par or better. Four of the last six times on Sunday, he has gone into the final round with at least a remote hope of winning. At two tournaments, he was within one shot of the lead over the final three holes.

But that’s not the best measure of progress.

Think back to a year ago this week.

Just over a month after he had back surgery for the fourth time, the image of Woods in a red shirt charging to victory was replaced by a mug shot from a Florida jail after his arrest on a DUI charge in the early morning hours of Memorial Day.

He had a white shirt and hollow eyes.

He had a problem with painkillers. A mixture of them were in his system after police found him asleep behind the wheel of his car, which was parked awkwardly on the side of the road, the motor running and a blinker flashing.

The idea of Woods catching Jack Nicklaus and his 18 majors, or Sam Snead and his 82 career PGA Tour titles, was no longer part of the conversation. It was hard to imagine Woods even getting back to golf at that point.

That now seems like a long time ago, almost as if it never happened.

Woods is playing again, and playing well enough to win. It could happen this week at the Memorial, a course on which he has won five times and has powerful memories. He was at Shinnecock Hills on Monday, gearing up for the U.S. Open in two weeks. It could happen there.

It could happen anywhere.

Nicklaus believes the next step for Woods is simply learning how to win again after a drought approaching five years, most of them interrupted by back pain. Nicklaus never went more than two years without a victory during his prime. He also never had a significant injury. In that respect, it’s hard for him to relate.

“But he has got to get through the barrier of not having done it for a while,” Nicklaus said Tuesday. “When you haven’t won, that always happens and that’s human nature. But when you got a guy that’s as good as he is and as competitive as he is, he’ll break through that barrier.”

Nicklaus, however, saw the bigger picture.

Winning appears to be the last obstacle. A year ago, Nicklaus was more concerned about Woods’ life than how many fairways he hit. He is thrilled to have Woods back at Muirfield Village for the first time since 2015. He is thrilled to see him healthy physically and emotionally.

It was at the Masters last year that Nicklaus tried to persuade Woods to see the physical therapist Nicklaus had used for years. But that was going to take time that Woods didn’t have, and fusion surgery followed a few weeks later.

“I never thought he would play again after that,” Nicklaus said. “I never dreamed you could fuse somebody and he could go play golf.”

Nicklaus has spent the better part of two decades facing questions that only time could answer — whether Woods could break his record in the majors.

Woods has gone 10 years since his last major.

When he was recovering from leg injuries and had gone 30 months without a PGA Tour victory, he walked off the course at Doral with soreness in his left Achilles tendon. And then he won two weeks later. At the Presidents Cup last September, he had no idea what his future in golf held because of the fusion surgery. Just over two months later, he was hitting drives beyond Justin Thomas and Henrik Stenson at his tournament in the Bahamas.

He never looked more lost on Memorial Day a year ago. Now he relishes his time on tour with players nearly half his age, and they love being around him.

“But whether he does or he doesn’t … it doesn’t make any difference,” Nicklaus said. “I think he’s still a great athlete, and a great golfer.”

Odds are against the Cavs in NBA Finals