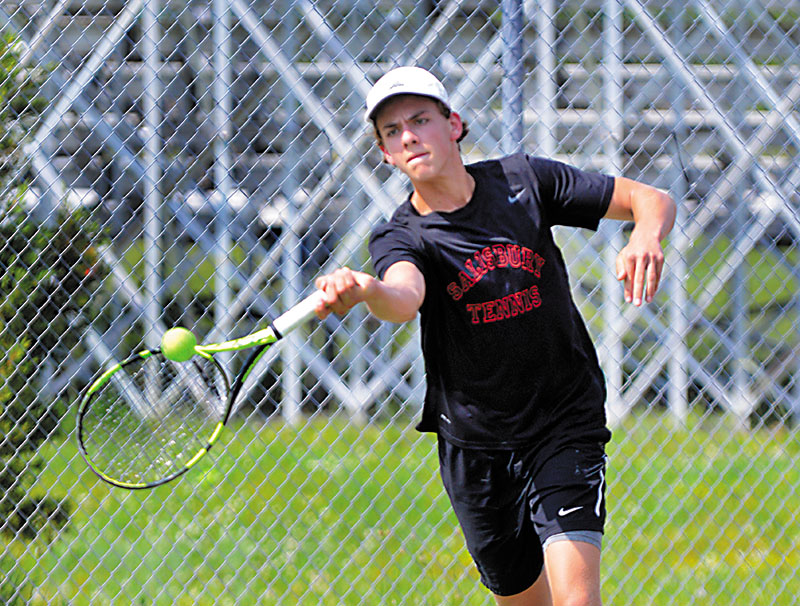 SALISBURY — Salisbury’s unbeaten boys tennis team has reached the fourth round of the 2A state playoffs, but getting there wasn’t easy.

The Hornets survived two tie-breakers and beat visiting Lexington for the third time Monday, prevailing 5-1 in a dehydrating, third-round showdown.

“That score does not indicate how tough this match was,” depleted senior Adam Drye said after the Hornets (21-0) earned a semifinal date with Brevard on Wednesday. “We really had to work for it.”

No one worked harder or longer in the 90-degree conditions that Drye. The fourth-singles player needed two hours and 20 minutes to outlast Lexington senior Gray Hedrick, 6-7 (7-9), 6-2 and 10-6 in a tension-filled tie-breaker that ended the match.

“Otherwise, we would have gone on and played doubles,” Drye said after improving to 21-0. “I went in knowing I had a strong opponent. I knew it was going to come down to me and how well I played in my own court.”

Lexington coach Varner Sink saluted his team after the Yellowjackets (19-5) had an eight-match winning streak snapped.

“Well, two matches went to tie-breakers,” he said, just moments after Hedrick’s match-ending smash went long. “If we had won those it would have been 3-3 and we’d still be playing. If we could have gotten to doubles, I felt real good about our chances.”

Instead, top-seeded Salisbury moves on, despite Hedrick’s best intentions. “I thought it was some of the best tennis I’ve ever played,” the senior said. “But it was my sixth or seventh tie-breaker this year and I’ve only won one of them.”

It was truly a near-miss for Hedrick and a close call for Drye. Hedrick trailed 6-5 in the opening set and was serving love-40 before rallying to win. “I think he had like eight set points on me,” he said. “I practiced so much this past year. I told myself I needed to pull it out.”

Drye responded by coming down with amnesia. “I tried to completely forget how frustrating the first set was,” he explained. “In the second I played my game rather than his.”

In the decisive 10-point playoff, Drye fell behind 2-0 before winning six of the next seven points. Ahead 9-6 and serving, he hammered a corner shot to Hedrick’s backhand side for the win.

The other tie-breaker came at No. 2 singles, where Salisbury’s Ethan McGee gained a 2-6, 6-3, (10-7) nod over junior Andy Casados, a first-round loser in last weekend’s individual state tournament. McGee blamed inefficient footwork for his first-set loss. “In the second I tried to get to balls a little quicker,” he said. “Instead of letting balls come to me, I went and got them.”

There was a bit of controversy with McGee ahead 7-6 in the tie-breaker, when Casados whipped a shot down the left side that may have may have caught the line. “I saw it out. He saw it in,” said McGee. “I stuck with my call.”

Moments later, the match ended when McGee delivered a forehand slice that Casados framed and deflected out of bounds.

“We’re on the honor system here,” SHS coach Milton Griffith said when asked about the close call. “We don’t have referees. You don’t argue the call, you ask for a line judge. It turned out to be a key win for us. I think if we had lost (at second singles), they win the match.”

“His net play was phenomenal,” Burton said. “I couldn’t do anything to pass him or make him make a mistake.”

Salisbury won in straight sets at third, fifth and sixth singles. Jander Rodas-Polacious — a quarterfinal-round loser in the states — got past left-hander Jacob Carlson, 6-2, 6-2 at No. 3. “I won, but it was way closer than it seemed,” he said. “He tried to play my game, lobs and slices. I was just better at it. I pretty much got up and stayed up. I don’t blow leads.”

Unblemished sophomore Sean Archer won his 21st match at No. 5, where he thwarted Lexington’s Blake Inabinett, 6-1, 6-4 for the third time.

“I played a great first set,” Archer said. “I was hitting the ball cross-court with pace and moving my feet very well. I wasn’t trying to do too much.”

Inabinett made it interesting, breaking serve and then holding serve to go ahead 4-2 in the second set. “That’s when I had to dig deep,” said Archer. “I played with more focus, more enthusiasm and was able to rally back.”

At No. 6 singles, Salisbury sophomore Juan Salazar carved out a difficult 6-3, 6-2 decision over Jack Burke, who finished his senior year with a 22-2 record.

“He was just consistent,” said Burke, who hopes to play rec tennis at UNC-Chapel Hill. “I kept hitting with my backhand and kept him running, but he didn’t give up on any balls.”

Salazar came off the court exhausted. “Right now my legs feel like they’re gonna fall off,” he said. “I’m that tired. But I knew I could beat this dude. The last time I faced him I was up 5-2 in the first set and 4-3 in the second — and lost them both. Today I got up 3-0 in both and literally played through every ball.”