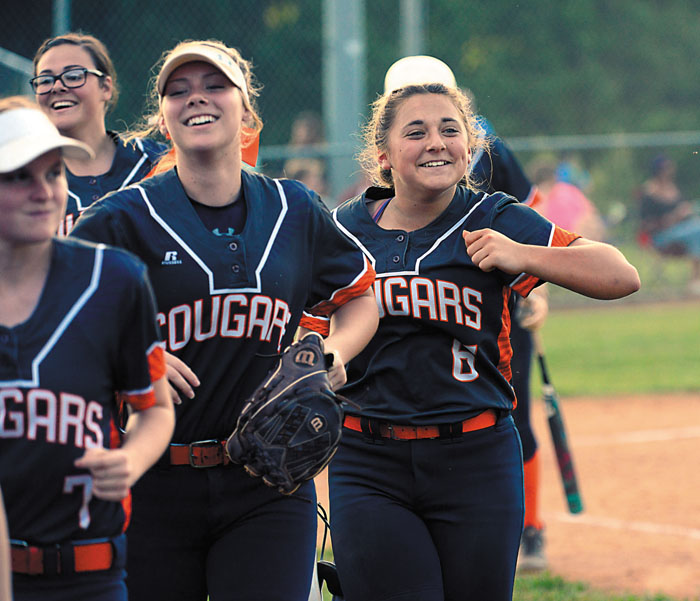 CHINA GROVE — Carson pitcher Rylie Stewart threw her fifth straight shutout on Saturday in a 10-0, five-inning romp against Kings Mountain in the second round of the 3A softball playoffs.

Stewart, a senior who is looking  like a steal for Greensboro College, extended her scoreless streak to 36 consecutive innings, as Carson won its ninth game in a row. She allowed four hits, struck out six and walked none.

South Iredell scored against Stewart — without getting a hit— in the second inning of a North Piedmont Conference game on April 27. Since then it’s been nothing but zeroes for Stewart — and the girls behind her.

“What Rylie does is she pitches with her heart,” Carson catcher Skyler Smith explained. “She does that every game, and that doesn’t change just because it’s the playoffs. She always inspires me to want to play my best.”

Smith, who fearlessly charged into the backstop to grab  a foul popup in the second inning, has been a big part of Carson’s late-season surge. Smith wasn’t in the batting order on Saturday — she was the flex player with DP Kaitlyn Honeycutt swinging in her spot — but she still impacted the game by handling Stewart’s arsenal of pitches, including a screwball that proved deadly to Kings Mountain hitters.

Jozie Nail bounced a single through the hole in the top of the first for the 13th-seeded Mountaineers (17-7), but Stewart had two strikeouts in the inning and was on her way to another gem.

An error and a walk opened the door for fourth-seeded Carson (18-6) in the bottom of the first, and freshman cleanup hitter Kary Hales drove  home the icebreaker with a single to right.

“I just poked it, that hit was kind of an accident,” Hales said with a laugh. “But it landed in a perfect spot and we had a run.”

When Hales and Katie Jewell executed a double steal, Carson took a 2-0 lead. Liza Simmerson’s bunt single moved Hales to third. Stewart grounded out to second, but Hales dashed home, forcing a high throw, for a 3-0 edge. Kaitlyn Honeycutt doubled on the left-field chalk to extend the lead to 4-o. It was 5-0 after Haley Howerton singled sharply to right-center. Carson batted around in that bottom of the first, and the tone was set.

“I think we’ve figured out that hitting early is the easiest way to do it,” Carson coach Charissa Duncan said. “We had some good at-bats. We had girls putting balls in play with two strikes on them, getting some hits, and it turned into a big inning.”

Stewart had a smile on her face as she walked to the circle for the top of the second. She doesn’t walk anyone unless she’s pitching around them, and she knew it was going to be hard for Kings Mountain to hit its way  back in it.

“When we score early, we always play better,” Stewart said. “Getting some runs, swinging the bats like that in the first inning, that relaxes us in the field.”

Hales, the second baseman, knocked one out of the park down the left-field line in the second for a 6-0 lead. It was her first high school homer.

“I really didn’t hit it that solid,” Hales said. “I didn’t think it was going out.”

Cassi Melton drilled a two-out double for Kings Mountain the third, but Carson third baseman Jessica Freeze made a nice stop of a smash by cleanup hitter Emily Graham and kept the shutout intact.

“Jessica has a great backhand and she always helps me out,” Stewart said. “We played great defense again. All those shutouts, that’s not me. That’s everybody.”

In  the fourth, Kings Mountain got the first two runners on base, but Stewart came back with a strikeout, a weak popup and a  soft liner through the circle that she went high in the air to glove.

“That one was headed to no-man’s land,” Stewart said. “I was the only one who had a chance and I wanted that out.”

Freshman first baseman Simmerson put the game out of reach in Carson’s half of the fourth with a two-out, three-run homer that jumped off her bat and soared toward straightaway right. That blast was the knockout punch for a Kings Mountain club that had stayed upbeat and lively even when it was 6-0.

“I went up there calm and not nervous at all,” Simmerson said. “I got a good pitch to hit, and I just went with it.”

Melton doubled again for Kings Mountain in the fifth, but Jewell, the shortstop, reached high and snagged a line drive for the third out.

Carson got the 10th run it needed for the mercy rule in the bottom of the fifth. Duncan got some reserves in the game. Pinch-hitter Ashlyn Ellenburg was hit by a pitch, moved to second when Freeze walked and advanced to third when pinch-hitter Tate Barger walked. With pinch-hitter Ellie Wilhelm at the plate, a wild pitch allowed Ellenburg to scurry home and end the game early.

Duncan said each of the Cougars was asked to set three team goals and three individual goals before the season started.

“We’ve been checking off some of those  team boxes with the conference championship and by doing better this year in the playoffs,” Duncan said. “And we’ve been checking off some of those individual boxes.  Kary checked off one tonight.  I think Jessica Freeze checked all three of her boxes in the first round of the playoffs. We’re doing good team things. This was just another good team effort, but we know it’s going to get tougher from here.”

Next for the Cougars is fifth-seeded North Buncombe (20-2), the mountain team that won at West Rowan in the first round last year. North Buncombe beat Sun Valley, 6-1, on Saturday.