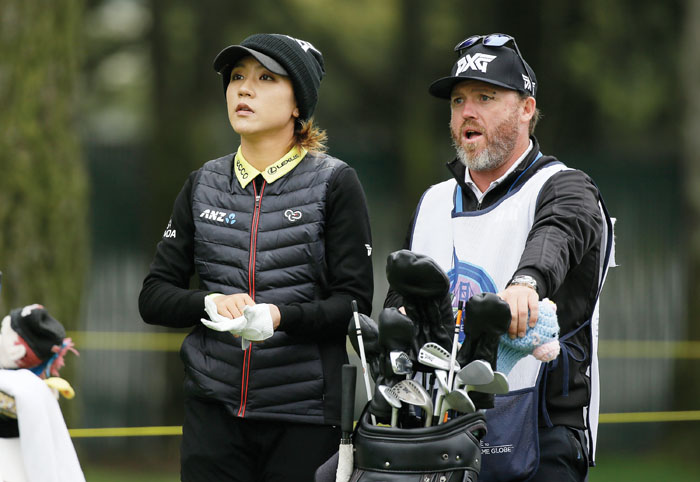 Lydia Ko, of New Zealand, waits to hit from the 16th tee of the Lake Merced Golf Club during the first round of the LPGA Mediheal Championship golf tournament Thursday, April 26, 2018, in Daly City, Calif. (AP Photo/Eric Risberg)

AVONDALE, La. (AP) — Chez Reavie had quite a few good moments at TPC Louisiana on Thursday. So did teammate Lucas Glover.

In best-ball format, the most important thing was those moments came on different holes.

Reavie and Glover teamed to shoot a 12-under 60 for a share of the Zurich Classic lead with China’s Zhang Xinjun and Dou Zecheng.

“Chez started well and I picked it up in the middle of the back nine,” Glover said. “He closed it off and then we both played really well on the front. Just kind of ham and egged it, I guess, as they would say.”

Reavie and Glover each had six birdies in the best-ball format, pushing through soggy weather early in the round before conditions cleared at TPC Louisiana. Six teams are two shots back in a tie for third after shooting 62.

“We were just rolling,” Reavie said. “I think we’re comfortable. We like to laugh and have a good time when we’re playing golf, and it definitely helps.”

Zhang and Dou birdied four of their final five holes. Dou made a 31-foot putt on No. 9 to cap the impressive rally and jump into the lead with Reavie and Glover.

It’s the first time since last year’s Tour Championship that the reigning champs of all four majors have been in the same field. None of them were among the leaders after the first round.

Masters champion Patrick Reed and Patrick Cantlay had a 65, and British Open winner Jordan Spieth and Ryan Palmer were at 66.

“I didn’t feel like there was really any rust,” Reed said. “I felt like I hit the ball all right today. I felt I hit some good quality putts. A couple of them went in, a couple of them didn’t.”

This is the second year that two-player teams have competed at the Zurich Classic. The unusual tournament features best-ball play in the first and third rounds and alternate shot in the second and final rounds.

DALY CITY, Calif. (AP) — Lydia Ko was back on top at Lake Merced.

Ko shot a 4-under 68 on a chilly Thursday morning at the LPGA MEDIHEAL Championship for a share of the first-round lead. Jessica Korda, Caroline Hedwall, In-Kyung Kim and Su Oh joined Ko atop the leaderboard in the LPGA Tour’s return to Lake Merced after a year away.

Korda, playing alongside Kim a group ahead of Ko, also eagled the fifth and had four birdies and a bogey. Korda won in Thailand in February in her return from reconstructive jaw surgery.