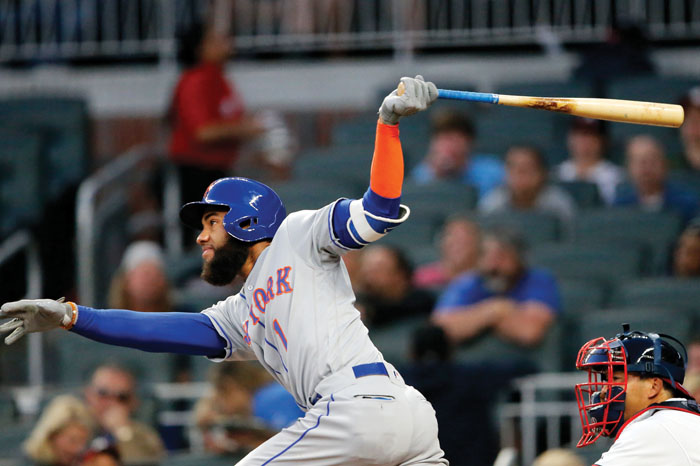 New York Mets' Amed Rosario drives in a run with a triple in the third inning of a baseball game against the Atlanta Braves, Friday, April 20, 2018, in Atlanta. (AP Photo/John Bazemore)

ATLANTA (AP) — Yoenis Cespedes, who struck out in his previous four at-bats, hit a tiebreaking single with two outs in the 12th inning to lift the New York Mets to a 5-3 win over the Atlanta Braves on Friday night.

Cespedes’ single to right field drove in winning pitcher Robert Gsellman from second base. Cespedes scored on Asdrubal Cabrera’s double off Josh Ravin (0-1) to right field. Cabrera ran halfway to third before stopping and trying to return to second. A review showed he was out at second, overturning the original call.

Ravin hit Gsellman with a pitch to open the 12th. Gsellman moved to second on Amed Rosario’s sacrifice. Michael Conforto popped out before Cespedes delivered the go-ahead hit.

Gsellman (2-0) pitched two scoreless innings. He struck out Preston Tucker to end the 11th with runners on first and second. Jeurys Familia pitched a perfect 12th for his eighth save.

Rosario’s double drove in Tomas Nido, who singled, in the Mets’ two-run third. New York took a 3-1 lead in the fourth when Wilmer Flores’ single drove in Todd Frazier, who walked and stole second. Flores was thrown out at second.

The Braves tied it in the sixth when Nick Markakis doubled, moved to third on a wild pitch by Syndergaard and scored on Kurt Suzuki’s fly to left field.

The double snapped Bruce’s 0-for-19 slump.

A Braves fan was ejected in the sixth for reaching over the wall on the right-field line and interfering with an attempt by Markakis to catch a foul popup hit by Cabrera. Following a delay of 1 minute, 49 seconds, which showed the ball to be in the field of play, Cabrera was called out. The fan, who was wearing a Braves cap and Braves shirt under his jacket, appeared to be embarrassed as he was booed during video replays before being escorted from his seat.

Mets: LHP Jason Vargas (broken right hand) will make a rehab start Monday in Las Vegas, instead of Sunday as originally planned. He could be in line to join the Mets’ rotation late next week, possibly replacing struggling RHP Matt Harvey. Mets manager Mickey Callaway said no decision has been made on Harvey’s role.

Braves: Ravin (viral infection) was activated from the 10-day disabled list before the game. RHP Lucas Sims, who recorded only one out while giving up three runs in relief Thursday night, was optioned to Triple-A Gwinnett.

Braves: RHP Julio Teheran (1-1, 5.40) will look for his second straight win after allowing one run in six innings in a 2-1 win over the Phillies on Monday.