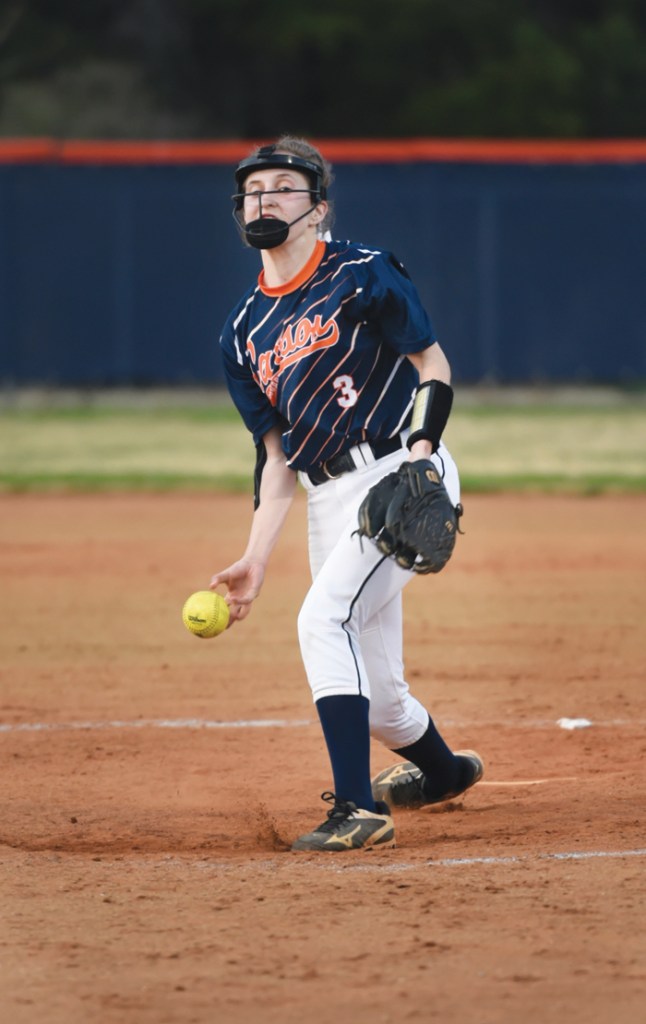 “Our dads coached us in middle school, and next year we’ll be college roommates,” Stewart said. “It’s exciting knowing someone I know so well will be there with me.”

Stewart has done most of the pitching for Carson the past three seasons. There were tough times when Stewart was a sophomore that made her tougher mentally. Carson was 5-16 that season, and when you’re pitching for a 5-16 team and your dad (Shane) is coaching, it’s not going to be an easy ride. You can either give up — or you can keep pushing.

“Rylie took a lot of criticism,” said Charissa Duncan, who took over as head coach prior to the 2017 season and has Shane Stewart on her staff. “She came through it. She kept working, and she made herself into a pretty good pitcher.”

Duncan recalls that Stewart and Freeze, as juniors, took on key roles right away as Carson got its softball program headed back in the right direction.

Carson turned in a 15-12 season in 2017, broke even (9-9) in its farewell season in a very tough South Piedmont Conference and made the 3A state playoffs. Stewart was instrumental in the Cougars’ success as a two-way player. She batted .368 with 14 RBIs  and won 10 games in the circle with 84 strikeouts. She made the All-Rowan  County team for that effort.

Stewart’s ball-playing start goes way back. She was a T-Baller as a tyke in the Landis Rec leagues, where she played with her current Carson teammate Kaitlyn Stout.

“I got interested in pitching really early,” Stewart said. “It was just cool to watch the pitchers. Then I learned a lot of mechanics from a pitching coach — Dave Perkins.”

When Stewart was a Carson freshman, the Cougars still had Lacee Hunsucker pitching. Stewart played some third base for that team and got her first varsity pitching win.

The tribulations of her sophomore year came next, but Stewart showed enough in travel ball that Greensboro College made an offer  before her junior season even started at Carson.

Greensboro is where Stewart wanted to go  because of the school’s strong biology program. Stewart  hopes to become a physician assistant after four years  as a biology major and two years of PA school.

As far as softball, committing to Greensboro  early allowed Stewart to relax and play to her ability. Freeze’s commitment to the same college, just made things even better.

Stewart says the highlight of her junior year was Carson’s 3-2, eight-inning win against West Rowan in the SPC tournament. Stewart pitched in relief of Krista Penninger in that one and shut out the Falcons the final three innings.

Stewart got off to a sweet start as a senior, including a 1-0 shutout of Cox Mill. She’s 8-6 in the circle  now and has struck out five betters for each one she’s walked. She’s pitched eight complete games and three shutouts.

“She always wants the ball and she’s had a very good season,” Duncan said.

Stewart is batting .333 as a senior, but she’ll be focused exclusively on pitching at Greensboro.

Freeze has also helped the Cougars. She hasn’t had much luck as a hitter, but she’s still been dependable at third base.

“Both of those girls have the work ethic to be good college players,” Duncan said.

Carson (11-6, 5-2) posted  lopsided county wins this week against East Rowan and South Rowan, games in which the Cougars crushed the ball. Carson should rack up a routine North Piedmont Conference win at Statesville tonight.

But Duncan acknowledged that the real test is next week. Carson plays at league-leading West Rowan (14-4, 6-1) on Tuesday and hosts South Iredell (11-8, 5-2) on Senior Night on Friday. Those are the two teams Carson lost to on its first trip through the NPC.

Stewart pitched a complete game in the 6-4 loss to West Rowan on March 29. Stewart allowed only one earned run against South Iredell, but the Cougars had defensive lapses and fell 5-3.

“Those will be the big games for us,” Duncan said. “Those are the big dogs in our league.”