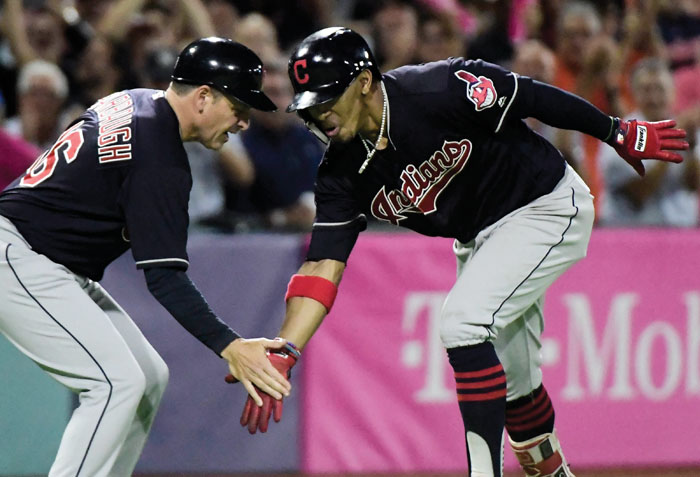 SAN JUAN, Puerto Rico (AP) — Francisco Lindor homered in his native Puerto Rico, Corey Kluber allowed one run in 6 2/3 innings and the Cleveland Indians beat the Minnesota Twins 6-1 on Tuesday night in the first regular-season game on the island commonwealth since 2010.

Michael Brantley and Jose Ramirez each had three hits for Cleveland before a sold-out crowd of 19,516 at Hiram Bithorn Stadium. Brantley and Ramirez hit consecutive homers in the sixth, and Yonder Alonso added a solo homer in the eighth.

PHOENIX (AP) — Patrick Corbin lost his no-hit bid on a checked-swing infield single with two outs in the eighth inning but finished a one-hitter to lift Arizona.

Corbin (3-0) walked one but otherwise was cruising toward what would have been the franchise’s third no-hitter. Brandon Belt ended it with a softly hit ball to the left side of Arizona’s shifted infield, beating shortstop Nick Ahmed’s throw by a step to send a groan across Chase Field.

Corbin struck out eight and threw 100 pitches in his first career complete-game shutout. The Diamondbacks have tied the best start in franchise history (with 2000, 2008) at 12-4.

NEW YORK (AP) — J.T. Realmuto hit a three-run homer off Masahiro Tanaka (2-2) in the fifth inning and drove in four runs in his season debut after coming off the disabled list.

Jarlin Garcia (1-0) gave up one hit in five shutout innings, overcoming five early walks to win for the first time as a starter. Garcia held the New York Mets hitless for six innings last week at home in his first major league start.

Giancarlo Stanton struck out two more times and grounded into a double play, finishing 0 for 4 and drawing boos from Yankees fans again. He is 3 for 35 (.086) with 20 strikeouts at home this season.

DETROIT (AP) — Victor Martinez homered for the first time since Aug. 18, a two-run drive in the second off Andrew Cashner (1-2), and Detroit stopped a five-game losing streak. Jeimer Candelario hit a tiebreaking triple in the fifth for Detroit.

Miguel Cabrera went 0 for 2 with two walks before leaving with back tightness.

CHICAGO (AP) — Adam Wainwright (1-2) outpitched Tyler Chatwood in frigid conditions at Wrigley Field, where the gametime temperature was 35 degrees and a 10 mph wind made it feel like 29.

Wainwright allowed an unearned run and four hits as St. Louis won its fifth straight, and he improved to 11-2 in 24 games at Wrigley. Matt Carpenter had two hits and three RBIs.

PITTSBURGH (AP) — Chad Bettis (3-0) allowed five hits in 7 1/3 innings and combined with three relievers on a five-hitter on a snowy night with a first-pitch temperature of 34 degrees. The announced attendance was 8,869, but there appeared to be fewer than 2,000 fans at PNC Park.

Wade Davis pitched a perfect ninth for his NL-leading eighth save and the Rockies improved to 5-1 on a seven-game trip that started in Washington.

ST. PETERSBURG, Fla. (AP) — Matt Moore (1-3) allowed an unearned run and five hits over seven innings and struck out six in his first start against his former team.

Moore (1-3) went 39-28 with Tampa Bay before being dealt to San Francisco in 2016 and was acquired by Texas in December. Daniel Robertson scored on shortstop Isiah Kiner-Falefa’s throwing error in the third.

A day after Washington topped the Mets with an eighth-inning rally that overcame a five-run deficit, Bryce Harper put the Nationals ahead early with a sacrifice fly. The Mets, whose 12-3 start had matched the best in team history, lost back-to-back games for the first time under new manager Mickey Callaway.

Dan Jennings (2-0) got one out in the relief of starter Junior Guerra. Josh Hader pitched two innings for his second save, completing a four-pitcher three-hitter.