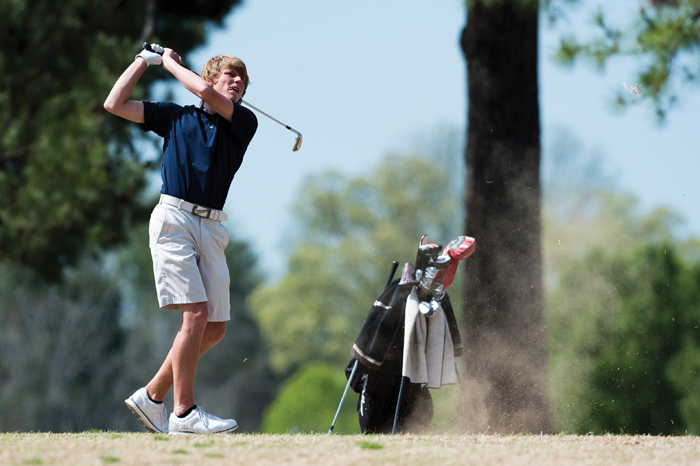 SALISBURY — Wind speeds were up at McCanless Golf Club on Wednesday — and so were the scores recorded in the Rowan County Championship tournament.

About the only linkster who wasn’t complaining about the 15-mile-an-hour gusts was East Rowan senior William Garland, the surprise medalist who helped the Mustangs breeze to their fourth straight county title.

“I played with the third-seeded group today,” Garland said with a hint of disbelief, moments after carding a 3-over-par 73 and lifting East (300) past runners-up Carson (340) and Salisbury (345). “I’ve been all-county the last two years, but never a medalist. On my own team, I’m not the ‘A’ player and not the ‘B’ player. I’m the ‘C’ player. I just kind of snuck in there today.”

Garland birdied three holes, including Nos. 13 and 14 back-to-back. “Halfway through, I was 5-over,” he said. “I wasn’t doing very good. But 13 and 14, those were little two-footers for birdies. That’s when I started feeling it. The back nine really helped me a lot. But the wind? It didn’t bother me.”

“If you watch him play, he has a penetrating ball flight,” Teems said. “He hits it a lot lower than a lot of other players, so the wind may not have effected him as much. The way he plays, he has the ability to go low any day. He was the low-scorer for our team in the states last year, so no, this wasn’t surprising.”

Garland’s final birdie came on the par-5 18th hole, a 440-yard straightaway with a 25-degree slant to the green.

“Eighteen was easy,” he said. “I had a 300-yard drive off the tee, then put my second shot just below the pin. From there I two-putted for birdie, a 10-footer.”

East senior Bryson Sprinkle placed second with a 74 and was joined on the all-county squad by teammates Colby Patterson (76) and Austin Miller (77). Sprinkle — the NPC Player of the Year and pre-tourney favorite — struggled to find his stroke.

“It wasn’t my best round,” the left-hander said. “I had two doubles (double bogeys) and couldn’t make any putts. On a lot of shots, I had to use imagination and consider the wind effects.”

Sprinkle may have lost his shot at medalist honors midway through his round when he double-bogeyed the par-4 17th hole. “My drive went off to the right, hit a tree and dropped straight down,” he said. “I proceeded to hit it over the green and things just got worse. The good thing was after my double on 17, I bounced back with a birdie on 18. But still, I feel like I left a few out there.”

Patterson, a freshman with a developing upside, finished third, despite carding three double-bogeys and a triple-bogey on the legendary sixth hole. “The green is really small on six,” he said. “I missed the green, chipped three times and putted twice.”

He offset that display with four birdies and finished with his best 18-hole score. Teems said Patterson, a newcomer, can’t replace the departed Nick Lyerly, now at UNC Greensboro, but gives East more ammunition as it moves forward.

“Every year, we sit down and look at goals for the team,” Teems said. “First thing we looked at was the conference. We got through that, got the conference championship and now the county. This is just something that was on the list.”

South Rowan sophomore Andrew Coward was part of a three-way tie for fourth place with a 77. Now a two-time all-county and all-conference player, he overcame a poor start and finished with two birdies.

“I played terrible,” Coward said, after the Raiders (359) placed fourth in the team standings. “I started off with two doubles on my first three holes and it didn’t get any better from there. The whole back nine just ate me up.”

Coward, the medalist in Tuesday’s CCC Tournament at the Warrior, was sharpest on hole No. 8, a par-4 which he birdied. “The eighth is a challenge,” he said. “It’s only 325 (yards), but you can hit a great drive and miss the green. The wind played a role for me. You couldn’t hit it high. You had hit irons off the tee and keep it low.”

Salisbury senior Alex Antosek, a top-three finisher in the Central Carolina Conference tourney each of the past two springs, earned his fourth appearance on the all-county team, despite shooting a disappointing 79.

“Just not my best day,” he said. “I was playing really well until the last six holes. That 10-foot putt wasn’t there for me — and I had six or seven of them. Didn’t make any. It was frustrating, but that round did not reflect the season I’m having.”