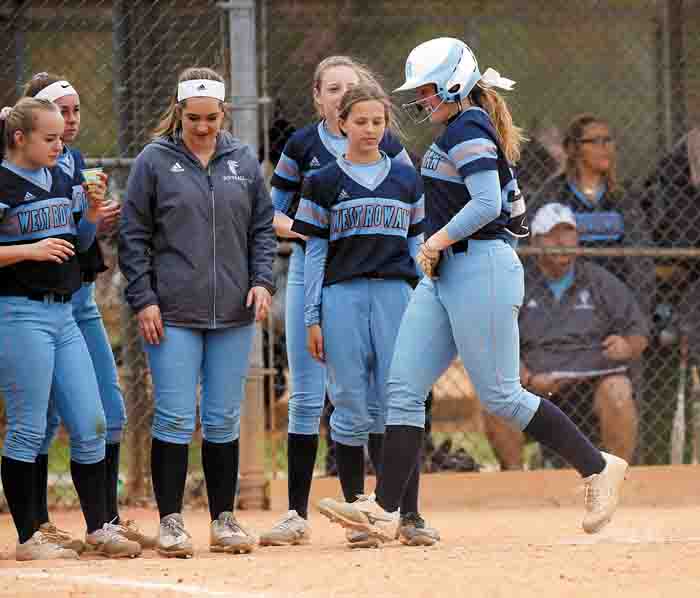 Wayne Hinshaw/for the Salisbury Post ... West Rowan’s Parker Greene, right, arrives at the plate after her homerun against South Rowan in the Civitan Classic semifinals on Friday afternoon. Greene also had three hits in the championship game loss to Mooresville.

SALISBURY — With the wind blowing out at Salisbury Community Park, West Rowan blasted three homers, but the Falcons made their statement in Friday’s semifinal in the Salisbury Civitan High School Softball Classic with their gloves.

“I didn’t let up, I just kept putting the ball in there where they could hit it,” winning pitcher Taylor Walton said. “I knew I could trust my defense. I just did my part. They kept making great plays behind me.”

While West won 13-2 against South Rowan, it was a tougher matchup than it sounds. West was clinging to a 2-1  lead in the bottom of the third when center fielder Hannah Pratt made the defensive play that changed the game.

With two outs and Raiders perched at second and third, South’s Brooke Lowery hammered Walton’s full-count pitch to center field. It appeared the wind might take it right out of the park. But Pratt stayed with it, kept tracking it.

“The wind was carrying it and just kept carrying it,” Pratt said. “I kept running back to the fence, and then I stuck my glove out and the ball was in there.”

It was a terrific, running catch. Instead of South leading, 3-2, and Lowery standing on third base, the Falcons still led, 2-1.

“She caught that ball, and I was like, ‘Oh, whatever, Hannah, whatever,'” Lowery said.

That grab was the momentum-changer the Falcons were looking for. They broke the game open in the top of the fourth against South’s hard-throwing sophomore Whitley Arnott. Pratt had a vicious, two-run liner for West’s first hit of the game to make it 4-1. A couple of South mistakes made it 5-1, and then Alexandra Linder, a right-handed leadoff batter, ripped a pitch over the right-field fence for a 7-1 advantage.

“I got low and just saw one I liked,” Linder said. “And I’ve been hitting the ball pretty well  lately.”

Linder also had a fantastic game defensively at second base. Her diving stop in the seventh was one of the highlights of the season.

“We played one of our better games,” West coach Jimmy Greene said. “We made really good adjustments to Arnott, who is a great pitcher. The first time we played South (West won 4-1), she struck out 10. I think we had two strikeouts today, and we came through with some really big hits against her.”

Mary Sobataka launched her eighth homer of the season in the fifth to make it 8-2. Then the Falcons piled on with five more runs in the sixth, including Parker Greene’s second homer in two days. That made it a 10-run-rule game.

But who knows what might have happened if Pratt hadn’t made that snag in deep center.

“We attacked balls on defense,” Coach Greene said. “We needed to do that because South can really hit. We had a few hiccups, but we just kept pushing through. We played with smiles on our faces, and we got it done.”

South coach Dean Mullinax frowned as he watched his team go from very  much in the game to way out of the game in a matter of minutes.

“Just give credit to West Rowan,” he said. “They hit the ball and they made plays. They played a great game from the start.”

South’s runs came on a run-scoring single by Ashlyn Plott in the third and a solo homer by Mataya Reynolds in the fourth, but Walton, a  freshman who had to come through with pitcher Hannah Roberts injured,  held the Raiders to two hits and two walks while striking out four.

Plott and Lowery, who delivered a game-winning hit in the first-round win against East Rowan, represented South on the all-tournament team.