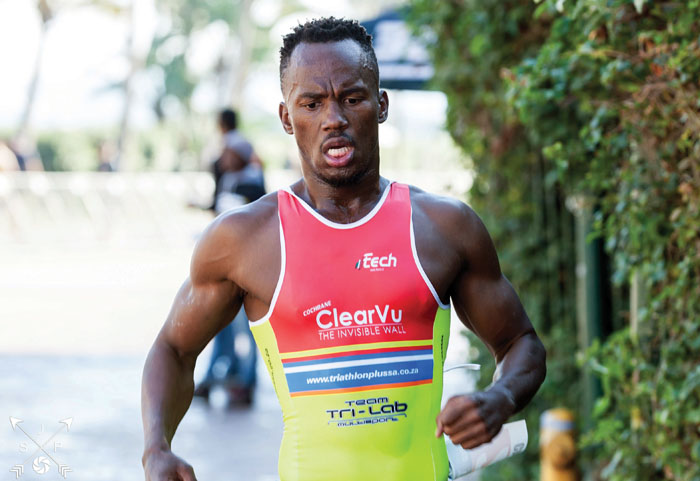 In this photo taken June 21, 2015 and supplied by B-Active Sports, Mhlengi Gwala competes in an event in Durban, South Africa. Assailants attacked Gwala, a top athlete, Tuesday, March 6, 2018, while he was cycling to a training session and cut into his legs with a blunt saw, causing severe injures. (B-Active Sports/Jethro Snyders via AP)

JOHANNESBURG (AP) — A South African triathlete who suffered severe injuries when attackers cut his legs with a saw says he will focus on recovery so he can run and cycle again, South African media reported Thursday.

Athlete Mhlengi Gwala told News24 media that he panicked when several attackers pulled him off his bicycle and started cutting his leg, manually using the blade of a chainsaw after it malfunctioned.

“I don’t know why they would do something like that to me,” Gwala said a day after several hours of surgery in the city of Durban.

Gwala said he was training before dawn on Tuesday when the attack happened, and that a doctor told him that the recovery will take six months, according to News24.

“I am not afraid after the attack,” he said. “I want to get through recovery and get back on my bike and running. I don’t want to think about anything negative.”

Police said they have opened a case of attempted murder and that no arrests have been made. Gwala said one of the men had a gun, according to police.

“The suspects fled the scene when they noticed someone was coming and the victim was assisted by security guards who were in the vicinity,” police said in a statement.

The sports committee of the South African parliament condemned the attack, saying it undermines the country’s goal of building a united South Africa.

A crowdfunding effort titled “Get Mhlengi back on his bike” has been launched.

Gwala represented South Africa at international competitions in Chicago in 2015 and in the Netherlands last year, according to Dennis Jackson, an athletic director who has worked with him.