Prep softball: West may be county’s best team in a while 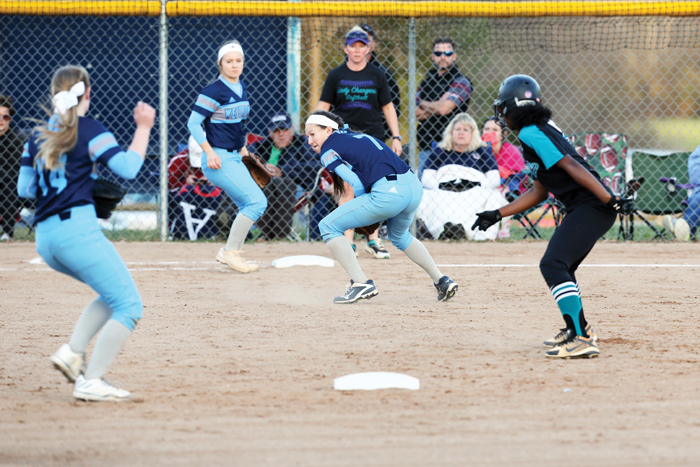 It was a combination of tough opponents, bad luck and unfocused Falcons.

West won conference championships back-to-back in 2014 and 2015 , then finished second, one game off the pace in 2016, in one of the state’s toughest 3A leagues. So last year’s late-season swoon was unexpected and unsettling for a program that hung 3A state championship banners in 2002 and 2003 and returned to the state tournament for a runner-up finish in 2005.

“We’ve got a good group and none of our upperclassmen liked the way last season ended,” West coach Jimmy Greene said. “I think they’ve used that disappointment in the right way. They’ve never been more motivated and they’ve never been more focused. They’ve got their fever for softball back. Our seniors aren’t just pushing their younger teammates, they’re pushing themselves.”

On paper, West has the county’s best team since East Rowan’s 2008-11 squads, with Chelsea White and Ericka Nesbitt  won four straight league championships and reached the Final Four in 3A twice.

West has seven returning starters, one talented transfer and two exceptional freshmen who are ready to play right away. In other words, there should be no holes, no weak spots in the lineup. That’s rare.

West is especially strong up the middle where senior catcher Parker Greene, a line-drive hitting lefty who can run, and junior shortstop Mary Sobataka, who combines superb defensive skills with home-run power, shared county player of the year honors a year ago. Both girls drove in 28 runs.

“They’re talented players, Division I players,” Coach Greene said. “We only get two weeks of practice in the spring and Mary was part of a nice basketball run, so she had just one day of softball practice outside before the season started. So it may take her a week or two before she settles in.”

Also part of West’s up-the-middle excellence are all-county senior pitcher Hannah Roberts, a Limestone commit, and junior center fielder Hannah Pratt. Roberts handled most of the pitching a year ago and won 11 games while also contributing quite a bit at the plate.

Pratt batted over .300, but the best part of her game is defense. She can go get it in center field.

Morgan Corriher returns at first base after driving in 18 runs and making the all-county team.

“She’s also got a great glove,” Coach Greene said. “She’s one of the best digging balls that I’ve seen in the last 10  years.”

Alexandra Linder returns at second base. Another returning all-county player, she batted over .400 last season and got off to a 4-for-6 start this season.

Camryn Nooner usually started at third base last season but has moved to left field.

Taking over at third base is Lauren Coughenour, a transfer from East Rowan. Coughenour got off to a fine start this season with five hits, a homer and four RBIs in the Falcons’ first two games.

“When someone swings the bat like she does, you’ve got to find a place to play them,” Greene said.

Freshmen Taylor Walton and Allison Ennis, familiar names from the Rowan Little League softball teams that won a World Series title, will be in the lineup.

“We’ve got some freshmen who are as good as seniors,” Greene said. “I’m not gonna lie about that.”

Greene said Ennis is as good as an athlete as anyone he has. She’ll start in right field.

Walton swings a big bat and will be used in a DP role. She’ll also be employed frequently in the circle. A lefty, she’ll give opponents a different look than the right-handed Roberts. Greene will use both of them in most games, probably with Walton following Roberts.

Greene said West also has quite a few talented players on the jayvee team, but the plan is for them to start on the jayvees rather than have small roles on the varsity bench.

Greene said West’s only weakness has been starting slow in games, but he hopes to cure that in the opening weeks.

“I do think we’re good,” he said. “We’ve got a chance to make a run at some thing this year, but I’m not going to put any pressure on these girls, If it happens, it happens. We want this to be fun. We want them to have an enjoyable season.”

Woods picks up pace, bringing game and buzz to…