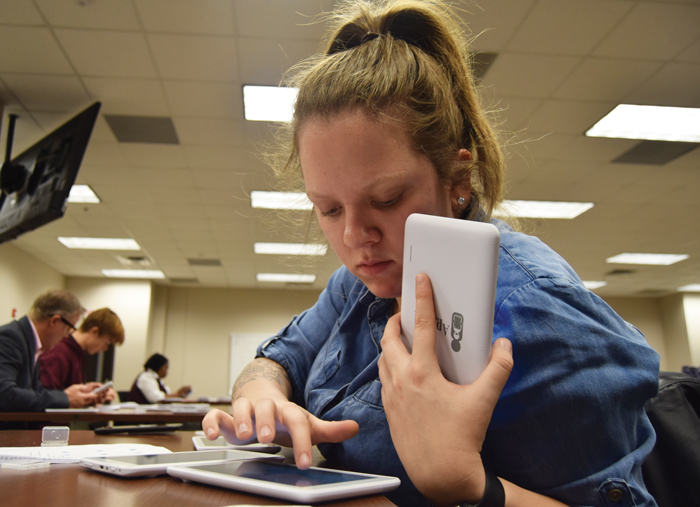 SALISBURY — After nearly two years and a name change, ApSeed (formerly Appleseed) has its e-reader distribution down to a science. But the 1,000 e-readers in the latest shipment have a few new bells and whistles.

Previously ApSeed, which seeks to prepare economically disadvantaged children for kindergarten with free literacy apps and e-books, used a modified Kindle Fire. But a built-in “kill switch” made the devices shut off after a few weeks without access to Wi-Fi, Apseed founder Greg Alcorn said.

It was a problem that had the nonprofit agency looking elsewhere. Eventually, Alcorn said, the organization decided to go with a custom-built e-reader made by a company in China.

The new slim white devices were designed from the ground up by ApSeed staff and will make their way into the hands of Rowan County children in just a few weeks.

The new readers have no camera and no ability to access Wi-Fi; are unable to download games; and, most important, have no kill switch.

ApSeed’s nearly 700 e-readers out in the county will be replaced with the new readers, and the extra 300 will be distributed to new day care partners and to children receiving WIC services.

But it hasn’t all been smooth sailing. Because of the order’s volume and origin, the approximately $70,000 shipment was held up in customs for 32 days.

“It was painful,” Alcorn said.

Customs officials were worried the devices were counterfeit or that the company of origin was fraudulent. Alcorn assured them that neither was true because of the detailed construction specifications ApSeed insisted upon.

“There was nothing about it that could be counterfeit,” he said.

The devices have finally arrived, and ApSeed staff and volunteers are spending the next few weeks loading software, checking quality and preparing to distribute them.

The re-launch also features new targeted apps. While old devices had bilingual programs, access to more than 150 e-books and several literacy apps, the new devices have slimmed down considerably.

“Last time we just threw everything at them,” Lipscomb said. “I think it was too much.”

“We pulled back what we had and pushed forward the best of the best,” Lipscomb said.

It’s a slight departure from ApSeed’s original path, which was to prepare students for kindergarten through access to e-books. But the organization’s mission to close the achievement gap between affluent and at-risk youths remains the same.

“It’s funny how you start something and it goes completely in another direction,” Lipscomb said.

After each new e-reader has found a home, Alcorn said ApSeed will order another 1,000 devices.

“The goal is just to saturate Rowan County,” he said.

According to Smart Start Rowan, about 6,000 children in Rowan County are economically disadvantaged. Alcorn wants to reach every one of them. If students can start kindergarten on an even playing field with their more affluent peers, they have a better shot at succeeding in life.

While ApSeed is still collecting hard data on the program’s success, Alcorn said, all the anecdotal evidence they’ve received has been positive.

“It’s goosebump territory,” he said. “You hear people talking about it and you just think, ‘This thing really has a chance. It really does.’”

New community partners include WIC, Kiddy Land — sponsored by a donation from Javon Hargrave — and Mother’s Choice. Partners in Learning, Head Start and Salisbury Pediatrics will continue to partner with ApSeed.