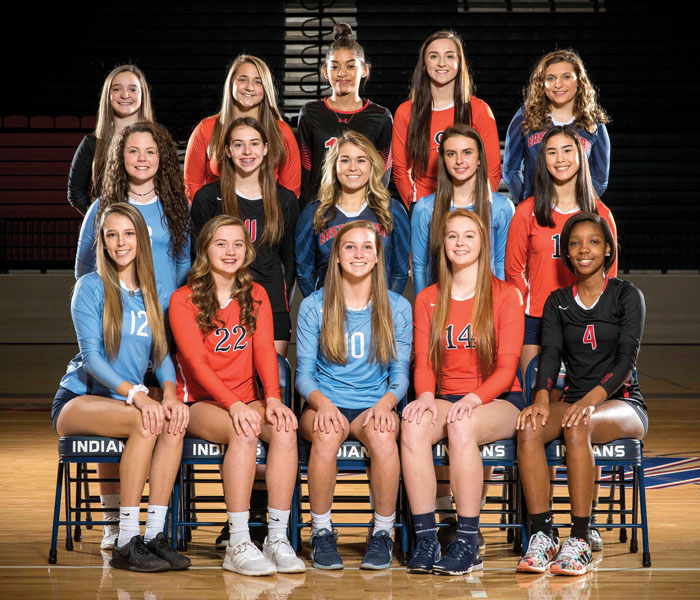 SALISBURY — Rowan County volleyball Player of the Year Tori Hester, a West Rowan sophomore, got a head start in her favorite sport.

“I’ve known Tori her whole life,” West coach Jan Dowling said. “I was helping her mom (Trish) with the Rowan Juniors back in the day, and Tori was leading the ball cart around the gym with a jump rope.”

Tori, the daughter of former Catawba College head football coach Chip Hester, has benefited from having a mother who played at Guilford and was head volleyball coach at North Rowan and Carson. Tori also benefited from having an older sister who was an exceptional player. Morgan, who is four years older, was Rowan County Player of the Year in 2015 as a Carson senior and now competes for Catawba.

“Mom would toss for Morgan in the gym, and I’d get to hit some too,” Tori said. “So I grew up with volleyball.”

Tori’s growth as a volleyball player continues. She was West’s best defensive player as well as its best offensive player. She led the Falcons in kills with 4.1 per set. She also led in digs and in serves received. She was second on the team in blocks. She was a solid server, not a ton of aces, but still almost twice as many aces as missed serves.

“I don’t really have a favorite aspect of volleyball,” Tori said. “I like all of it. Everything about the sport, offense and defense.”

Hester had an immediate impact as a varsity freshman, making the all-county team. As a sophomore captain, she was more aggressive. She’s one of those quiet storms. Mostly calm on the outside, but with a competitive fire raging on the inside.

“I’ve been blessed to coach some good volleyball players,” said Dowling, who coached several athletes who went on to fine college careers when she was at South Rowan. “But Tori is one of the best, if not the best, that I’ve ever coached. She was our terminator. When we needed a kill, we went to Tori. And the thing that doesn’t show up in the stats is she attracted so much attention that it left our other players wide open.”

West competed in what had to be the toughest 3A volleyball league in the state this season and still managed a 20-7 overall record.

Four of the seven losses were to North Piedmont Conference opponent North Iredell, the best in the state, regardless of classification. West was 1-2 against Carson, a top-10 team in the state. The Falcons’ other setback came against Davie County, a top-20 4A team.

The heart and soul of West’s rise to prominence was Hester. She had a season-high 30 kills in a five-set NPC struggle against Statesville. She had 23 kills when West finally beat Carson in the North Piedmont Conference Tournament in Olin. That was a breakthrough for the Falcons, their first success against the Cougars since Kelan Rogers became Carson’s coach in 2009.

“I’ve been playing with Tori a long time,” said West’s all-county setter Ava Link. “She keeps getting stronger and taller and more athletic and she knows the game so well. She’s also someone you want as a teammate. She has a great personality. That really helped us be a good team.”

Hester produced 26 kills and 28 digs when West beat Sun Valley in the first round of the 3A state playoffs. Unfortunately, the Falcons were under-seeded at No. 16 and ran into No. 1 North Iredell  one more time in the second round.

Hester is talented — she leaps high and moves smoothly and swiftly — but her work ethic exceeds her talent.

“She has a love for the game that is unmatched,” Dowling said.  “She’ll leave my practice and then go to her club team (Carolina Union) and get individual help, plus she plays beach volleyball in the summer and attends camps.”

Hester’s primary competition for player of the year came from Carson junior Mallory Weast, who accomplishes amazing things for a 5-foot-6  outside hitter and performs the same sort of all-over-the-floor magic for her team that Hester does for West. The only real difference between the two was hitting percentage (that’s kills minus errors, divided by hitting attempts). Anything above .300 is considered a super hitting percentage. Hester checked in at .333, while Weast hit .236.

Weast was a classy runner-up at the all-county photo shoot, giving Hester a congratulatory hug.

“I was Tori’s teammate with the High Rock Volleyball Club and we grew up playing together a long time before we started playing against each other,” Weast said. “She was always an athlete, and she’s someone who’s going to go as hard as she can to get the job done.”

Hester also spent a lot of time on softball fields growing up and contributed to West’s varsity team as a freshman pitcher. But it’s obvious that her future is brightest in volleyball. She is so good defensively that she could wind up as a Division I libero, but there’s a lot of time and a lot of wins ahead of her before she needs to make a college decision.

“I’m just going to keep working at it,” Hester said. “Open gyms, workouts, 4-on-4s, whenever there’s a chance to get better, I’m going to be working at it.”

Besides Hester and Link, a junior, West also placed 6-foot senior middle hitter Braelyn Faust, who plans to play at Lenoir-Rhyne, and senior outside hitter Maddison Myers on the all-county team.

Carson (23-5) maintained a high level of play under Rogers and has five of the 15 all-county players. Joining Weast on the team are senior middle hitter Lindsay Elmore, who signed with Queens, junior setter Grace Thomas, freshman outside hitter Jaden Vaughn and freshman libero Kary Hales.

South jumped from 13-13 to 19-8 and was 15-3 in the 2A Central Carolina Conference. South coach Jenna Horne is the Post’s Coach of the Year. All-county Raiders are junior Janiya Downs, sophomore Kira Rymer and senior libero Jenna Strickland. Rymer served as South’s setter as a freshman, but emerged as one of the county’s best players in her first season as a hitter.

East’s junior libero Baleigh Hill accounted for 447 digs against some of the state’s best hitters, while East senior Leah Wyrick turned in a unique season, leading East in kills and assists.