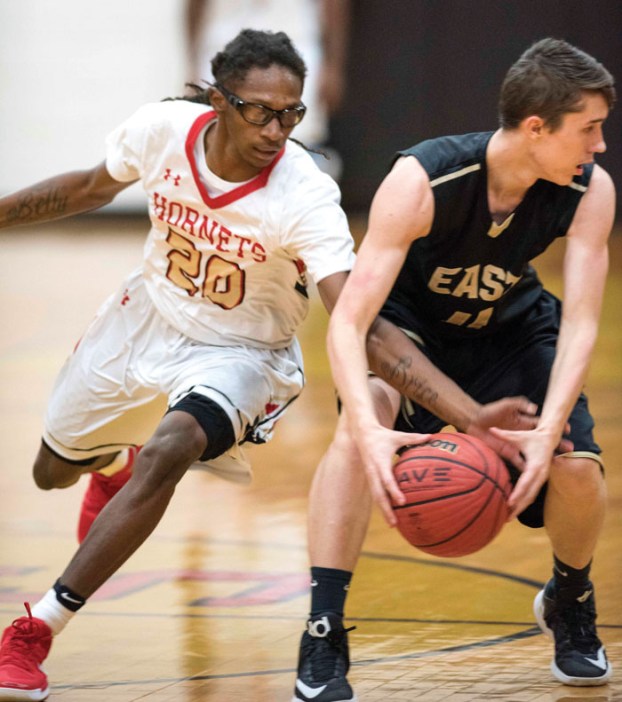 SALISBURY — It got a lot more exciting at the end than anyone anticipated, but league-leading Salisbury held on for a 61-54 Central Carolina Conference victory against East Davidson on Friday.

“We’re up 19 and then I took the starters out when they got it down to 10 because I didn’t think we were hustling enough,” Salisbury coach Bryan Withers said. “And then they got it down to three. But I never felt like we weren’t going to win the game and we got a chance to see how our guys reacted in tough situations. We turned up the defense and made the plays we needed to at the end, and that should help us down the road.”

Salisbury sputtered through the first quarter, settling for a 15-13 lead.

But the Hornets were stifling defensively in the second quarter, holding the visitors to one field goal, and got some separation. Bill Fisher had a three-point play and Elijah Moss made a 3-pointer as the Hornets went up 27-17 at halftime.

“Elijah can really shoot and I think we shoot the ball better as a team than people realize,” Withers said.

When Oshaun Robinson hit a 3-pointer early in the fourth quarter, the Hornets led 51-32 and appeared to be cruising, but they put it on cruise control too early. Guards CoCo Jones and Colton Burgiss heated up for the Golden Eagles from deep, while 6-foot-5 post man Kobie Warrick was scoring inside.

When  Mason Riggs made a steal and hit two free throws as the clock moved under the minute mark, East Davidson was down only 53-50 and the fans who had made the trip from Thomasville were shaking the bleachers.

But Salisbury held on. Fisher got a dunk off a turnover for the key bucket. Then Trell Baker and Jabreal Russell got quick hoops to put Salisbury ahead by nine with 10 seconds left.

“We played bad at times, but we also played pretty good at times,” Withers said. “We’ve got a talented team, we’re still working on different combinations, and we’ll learn from it.”

By Mike London mike.london@salisburypost.com SALISBURY — It came down to a whistle, really. With Salisbury leading East Davidson by three points with... read more