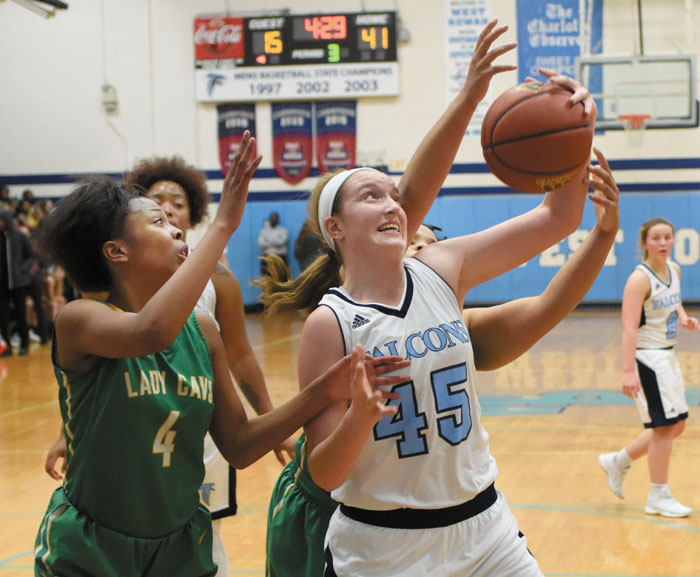 MOUNT ULLA — Slowing the West Rowan girls basketball team for four quarters is a test no team has passed this season.

Add North Rowan to the list of squads who have swung-and-missed against the Falcons following Wednesday night’s 67-24 thrashing.

“We’re just playing our game,” winning coach Ashley Poole said after West improved to 6-0. “We’re not worrying about the Christmas tournament of anything else down the road. We’re just trying to get every win we can.”

West jumped to a 21-8 first-quarter lead and pushed it to 35-14 by halftime. “Well, we wanted to set the pace,” said Poole. “We wanted to work the ball for good shots and make them.”

The Falcons were once again paced by 5-foot-10 sophomore Abigail Wilson, who contributed 22 points and 11 rebounds. Wilson has scored at least 20 points in each of West’s games and leads the county with a 24.5 points-per-game average.

“Abigail was getting open inside so we kept feeding it to her,” said Poole. “And when she wasn’t open, she’d kick it out and find open people.”

Sophomore Taylor Poole netted 12 points and Gabby Blabon had six assists for the Falcons, who got 21 points from their reserves. North (2-4) was limited to nine field goals — including just four in the second half. A running clock was used following Poole’s 3-pointer with 4:30 to play.

“We got outplayed,” said disappointed Cavs’ coach Ron Bost. “It’s a 40-point loss. There’s nothing much you can say.”

Poole kept the win in perspective, instead comparing it to Tuesday’s unsightly 71-57 triumph at A.L. Brown.

“That was a good win, but we didn’t play well,” she noted. “Tonight was a good bounce-back. We played much better defensively.”