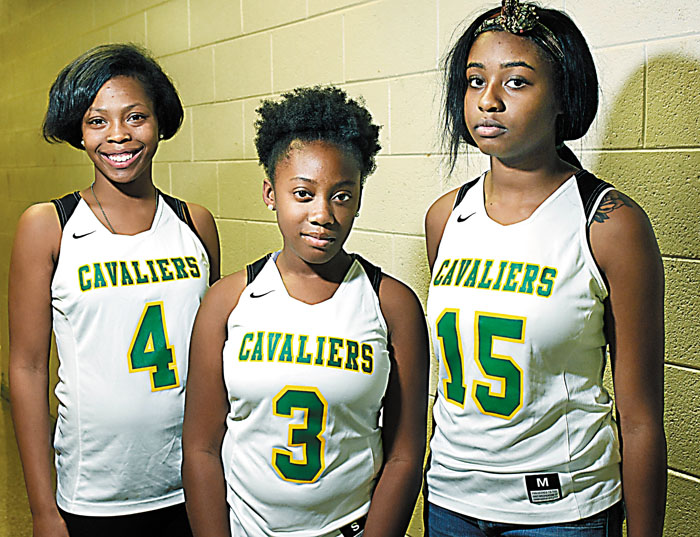 The second-year North Rowan girls basketball coach is doing his best to erase last season from memory — and he’s asking for our patience.

“Well, a little patience,” he said with that easy smile of his. “We want to win, but we’ve got to stick to our guns. Last year was frustrating for me and the girls who are coming back. We don’t want to go through that again. I don’t think we will.”

That’s good news for the Cavaliers, who lost their first 10 games a year ago, rolled a gutter-ball in the Christmas tournament and finished 4-18 overall. In the 2A Central Carolina Conference, they went 3-7 and tied for fourth place. Three times North suffered two-point losses — including a season-ending defeat in the conference tournament — but mostly, the Cavs were just plain overmatched. “Yeah, and it’s over,” the coach smirked.

This season begins with two important changes: realignment to the 1A Yadkin Valley Conference and a much-needed injection of self-confidence.

“It’s almost a different atmosphere on the team,” reported Bost, a 1999 West Rowan graduate. “Last year, I had athletes who played basketball, all great kids. This year, I’ve got girls who have played AAU. They’re hustling, diving after balls, playing the game with passion. If I open the gym for a volunteer workout, probably 12 of the 13 girls will be here. As a coach, that’s what I’m trying to instill. I want them to want to be here.”

North returns five lettermen, including part-time starters Tanajah Robinson and McKenzie Shoaf. The two combined for only 55 points last winter, but their value goes beyond the margins. Robinson is the team’s only senior, a 5-foot-6 forward with an accurate shooting touch. “On her good days, she’s the player you don’t want to leave open,” Bost noted.

Shoaf is a defensive-minded gym rat. At 5-4, the junior was all spark-and-energy last season and will be asked to provide backcourt leadership this year. “We can put her on the other team’s best guard,” said Bost. “She’s very coachable, but that comes from being a coach’s daughter.”

The rest of the starting lineup includes junior forwards Jaylan Reid (5-8) and Taren Sherrill (5-6), along with freshman point guard Natavia Taborn — the gem of a ninth-grade class that has Bost envisioning better days.

“Ta isn’t afraid of the big moment,” he said. “Real competitive with an all-around game. Having a true point guard makes a world of difference.”

Reid is long and athletic, a potential inside-outside force capable of grabbing 10 rebounds per game. “I keep telling her to watch film of Brianna White from last year,” said Bost. “That’s who I want her to model her game after.”

Sherrill is a long-distance operator who was hit-or-miss last season. Bost senses she’s emerging from that shell. “She could be a 50-percent three-point shooter if she wants to,” he explained.

Four other freshman will contribute off the North bench — Makiya McDaniel, Darlissa Robbins, Tosha Brown and Brashia Sifford — and represent fertile ground for a promising future. “We’re positioned to be back in an up-trend,” Bost said. “The freshman class and the eighth-grade class behind them look really good.”

Defense is a North Rowan strength. Shooting and scoring, not so much. And the YVC schedule — a hodge-podge featuring teams that played in three different leagues a year ago — is an unknown variable. But any way you eyeball it, this season will be better than last.

“You won’t see that again,” Bost concluded. “If we knock down the shots, we’ll be in every game. We’ve got a lot of girls with an ‘F’ beside their names, but they’ve played in competitions in Florida and Texas. I don’t think the level of competition will be too big for them.”

Tanajah Robinson, senior forward — Steady leader and a knock-down shooter. The team’s Michelin Man because so much is riding on her wheels. Intuitive player is very good at reading a situation.

Natavia Taborn, freshman point guard — Most promising of the five freshman on the roster, she played AAU ball for the Rowan Hurricanes. Growing pains will beget future gains.