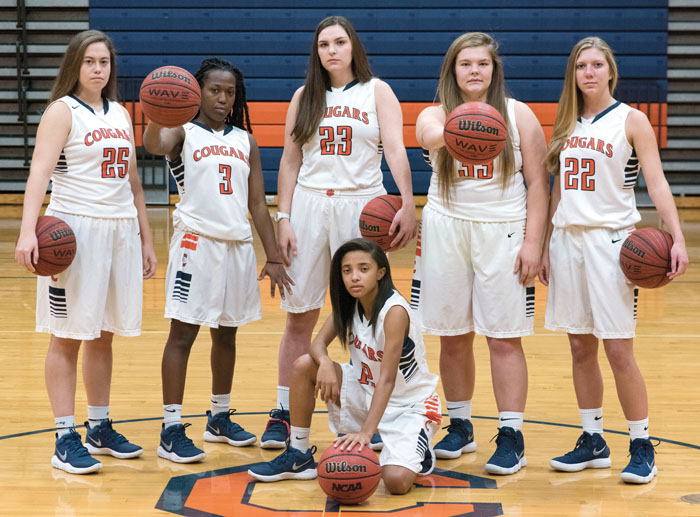 CHINA GROVE — Carson’s girls are going to be better than last season. That’s saying something because the Cougars were a solid, 21-win team in 2016-17. They didn’t beat themselves and they made more talented teams such as Hickory Ridge and Central Cabarrus work extremely hard to get past them.

Carson returns two first team all-county stars in senior guard Olivia Gabriel and junior forward McKenzie Gadson. Those two combined for 30 points per game and provided more than half of Carson’s offense. There’s no reason to think they won’t be even better.

But the G-girls are only part of the reason Carson could be special. This should be the deepest team Carson has ever had.

“There’s strength in numbers, and we have numbers,” Carson coach Brooke Misenheimer Stouder said. “As we sub, we should get better. We should always have fresh legs and we should be able to run the floor hard, put on a lot of pressure defensively, and play at a fast pace.”

Stouder (she got married in September) has been in charge of the program since the initial Cougar practice in 2006. She didn’t have a chance her first three years when the overmatched Cougars went a demoralizing 4-67, but everyone was patient and she’s turned out to be one of the better coaches in county history.  Carson has been 124-64 the last seven seasons. This season, for the first time ever, Stouder, now sixth on the county’s all-time wins list, is going to see her  head-coaching record rise above the break-even mark. Hopefully, someone will bake a cake when it happens.

Carson graduated five girls. Destiny Jackson, Sydney Taylor and Micah Furr made some big 3-pointers, while Kailie Ketchie and Ali Street played with uncommon toughness. All five were good teammates, and team chemistry is at least half the battle. Carson replaces those graduates with a tidal wave of fresh talent — more athletic, faster people, but girls who still have to figure out their roles.

Carson’s freshman class is exciting, but it might be earth-shaking if Carleigh Perry hadn’t torn an ACL. Perry’s debut has been delayed until next season, but there’s a good chance she’ll provide a powerful post presence in 2018-19.

Carson has six seniors, led by Gabriel. Gabriel surpassed 1,200 career points on opening night this season and will become the program’s all-time scoring leader if she turns in another season like her first three. Kelly Dulkoski, a Division I guard, set the record in 2013 with 1,458 career points. Gabriel is only 5-foot-5, but she’s strong for her size, she’s fit from a season of cross country, and she’s determined. She attacks the basket relentlessly and shoots an extraordinary amount of free throws. Coming into this season, Gabriel was 447-for-677 from the foul line in her career. She’s improved her free-throw shooting every season and should be around 75 percent this time.

“She’s had a tremendous impact for us,” Stouder said. “She can push the ball up the floor and she’s a good driver, a good ball handler, a good passer. She can do a lot of things at a high level.”

Besides averaging 15.8 points per game as a junior, Gabriel had 150 assists and was Carson’s No. 2 rebounder.

The other seniors add experience and knowledge. At 5-foot-11, Anne Marie Turney is the tallest Cougar, so her primary jobs are rebounding and post defense. Forward Maren Shumaker is the talker, the communicator, the coach on the floor. She boxes out with physicality and she’ll take a charge anytime, anywhere. Guard Taylor Wiggins is tiny, but she corrals loose balls and long rebounds and is a spirited defender. Siera Fesperman has overcome knee and shoulder injuries and provides grit and maturity. Shaleah Jolly is another aggressive defender.

Gadson is unlikely to lead the county in scoring — quite a few girls will shoot more often — but she was  the county’s most efficient scorer last season. She shot 56 percent from the field, believe it or not, while leading the Cougars in rebounding.  She’s also the point person on Carson’s 1-2-2 press where her length, speed, spring and focus make her a tough obstacle.

Forward Nancy Gamewell is the only other junior. She worked on the jayvees the last two seasons and should help the Cougars on the boards.

Sophomore guard Maci Cooper played varsity as a freshman and came on strong late in the season with several double-figure games. She’s 5 feet tall, so she needs space to shoot, but her 3-point shot is deadly.

Sophomore Taylor Conrad moves up after a good year on the jayvees. One of the county’s best cross country runners, she’s an athlete. She’ll provide a lot of defense and gives the Cougars another 3-point shooter.

The three healthy freshmen are going to play a lot.  Colbie Perry, the daughter of Carson boys coach Brian Perry, is a special shooter and should contribute double-figure outings. Lani Isley  is a tough, physical, drive-and-dish point guard who is looking to set up her teammates. Ellie Wilhelm is another talented guard. She brings ball-handling and scoring skills to the table.

“Our freshman class is strong,” Stouder said. “They are good kids who are used to winning.”

The school record for wins at Carson is 23 by the 2011-12 team. That also was the only Carson team that won a championship, sharing the North Piedmont Conference title with North Iredell.

Moving back to the six-team NPC this season (league games won’t start until January), Carson figures to compete with North Iredell and West Rowan for the crown.

Carson also is one of the teams with a realistic chance to take the Christmas tournament, an event the Cougars have never won.

Olivia Gabriel, 5-5, Sr. — Tough competitor lives at the foul line. Carson will put the ball in her hands at the end of games, and she’ll make good decisions and free throws. She can become the school’s all-time scoring leader.

McKenzie Gadson, 5-8 Jr. — Smart and a terrific run/jump athlete who was Rowan County Athlete of the Year as a sophomore. Definitely has a college future.

Maci Cooper, 5-0 Soph. — Cooper is a superb athlete who can do anything well. Tennis, track, softball … you name it.