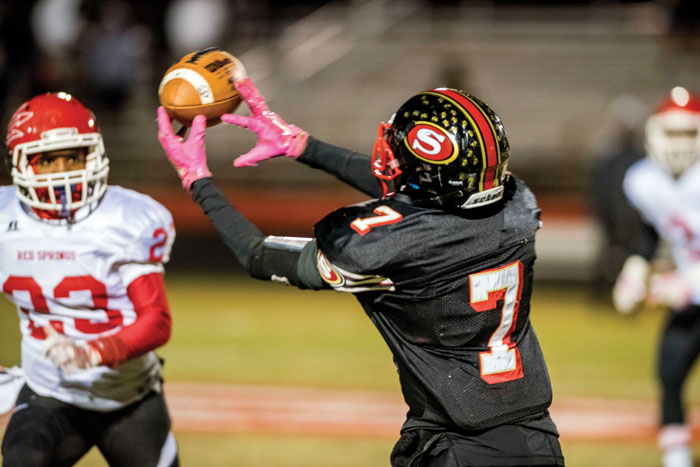 SALISBURY — After racing through its season, Salisbury’s football team was handed its walking papers Friday night.

The over-achieving Hornets barely had time to wipe their feet on the post-season welcome mat when visiting Red Springs dealt them a welcome-to-winter, 19-7 loss in the first round of the 2A state playoffs.

“I’m disappointed for the kids and the seniors who are leaving us,” first-year coach Brian Hinson said, after sixth-seeded Salisbury finished 7-4. “People didn’t expect them to win seven games, but they did. Hopefully this season set the tone for our program going forward.”

It was a dismal finish to a terrific season. Salisbury’s first playoff game since 2014 was a folly-filled misadventure punctuated by turnovers, personal fouls and an ineffective offense that managed only nine first downs and 49 yards rushing.

“I hate it,” senior quarterback Griffin Myers said in the hushed SHS locker room. “It’s the worst feeling in the world right now. We’d move the ball and I’d make mistakes. We’re better than this — a hundred times better.”

Myers passed for 134 yards but was intercepted three times. Each was intended for receiver Trell Baker — Salisbury’s most-dangerous weapon with the ball — but the senior had only two catches and three rushing attempts. “It wasn’t for lack of trying,” Hinson said. “We had opportunities. We just missed them.”

“Sometimes things don’t go your way,” said Salisbury’s Levaric Johniken, the defensive end who camped out in Red Springs’ backfield. “But you always have to fight, right until the end. Even when the odds are stacked against you, you’ve got to play until the bell rings.”

It didn’t toll for the Hornets until the waning moments, when Red Springs’ fullback Jerome Bass took a handoff from quarterback Denym McKeithan, bulldozed into the secondary and rumbled 56 yards down the left sideline, providing the game’s final points with 1:02 remaining.

“Until then we were still in it,” said defensive back Tevion Wood. “The defense gave its all. The whole team did. We just didn’t execute often enough.”

Bass did. The 6-foot-1, 240-pound senior who has drawn luke-warm attention from a number of collegiate programs, provided an abundance of horsepower. He opened the scoring on Red Springs’ second possession, capping an eight-play drive when he snared a right-side swing pass and plowed 10 yards into the end zone just 15 seconds into the second quarter.

“It’s coming from my heart,” Bass said after catching three passes and rushing for a game-high 79 yards. “We refuse to go home. I’m part of a senior class that had never won a playoff game, so this was special.”

Salisbury tied the score 7-7 on the ensuing drive, navigating 61 yards in seven plays. Freshman Mike McLean scored on a 2-yard plunge with 8:39 remaining in the first half, but the highlight-reel play was Raheim Walker’s stumbling, 34-yard pickup after grabbing a pass from Myers.

“We were a good football team,” Hinson said. “Everybody talks about coaching and x’s and o’s, but to be able to do that, you’ve got to have kids who can play the game. It showed.”

Red Springs scored the go-ahead touchdown with less than a minute to play in the first half. McKeithan picked up 50 yards on four scrambles — including 22 when was flushed out of the pocket with 1:06 on the clock. A late-hit penalty against the Hornets added 15 yards to the play.

“It was tough to guard against all the weird formations they were throwing at us,” said linebacker Nick Austin. “They’d line up three backs in a row behind the quarterback. You don’t see a lot of that nowadays.”

The knockout blow was delivered by Bass. “I got a push from the offensive line,” he explained. “Then I saw daylight, so I spun off the defender and it was off to the races.”

And the end of the line for Salisbury.

“We let our friends and teammates down,” Johniken said. “When we started the season, we wanted to be the senior class that changed the program, that turned it around. Even though we lost, I think we’ve done that.”

NOTES: Baker, who was blanketed by Red Spring’s secondary, was only able to contribute 15 yards of offense. … The guests had 311 yards total offense, including 233 on the ground. … Third-seeded Hendersonville, Red Springs’ next opponent, advanced with a 49-0 first-round win against Brevard. … Salisbury’s state-champion girls’ tennis team was honored at halftime.