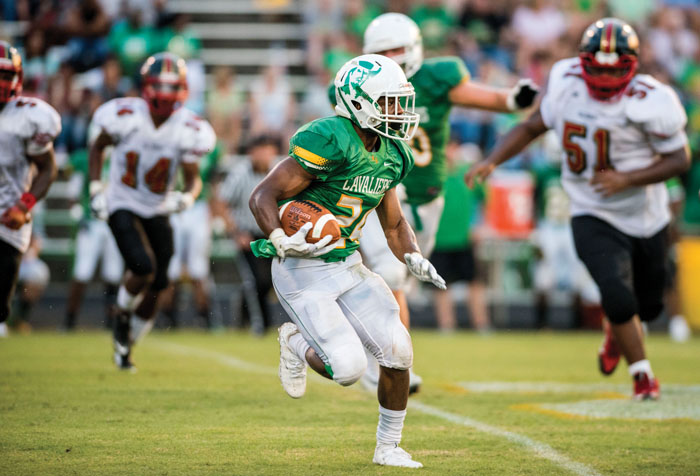 Three Rowan County schools didn’t qualify for the football state playoffs. The other three were ousted on Friday in the first round, with North Rowan and West Rowan dropping road games to go along with Salisbury’s home setback.

That’s happened before, but not often in the modern era. Rowan had at least one school make the second round every year from 2003-16.

In 2002, in the first round, North was blasted by Burlington Cummings, 54-7; South lost to Greensboro Page, 17-14; Salisbury was pummeled, 53-18, by Hibriten, and West lost to Crest, 19-7. East didn’t make the playoffs that year. Carson wouldn’t open for several more years. That was a unique year, a year in which a coach who went 4-8 (Salisbury’s Mike Peavey) was Rowan County Coach of the Year and an offensive lineman was a county player of the year. That’s the only time an o-lineman (South’s William Van Wieren) has ever won that honor.

South’s loss to Page actually became a forfeit victory in the record books, but that forfeit occurred long after South had packed up its uniforms.

COLUMBUS — North Rowan’s loss at Polk County was the toughest to swallow because the ninth-seeded Cavaliers held first-half leads of 13-0 and 19-3 against the Polk Wolverines, a No. 8 seed in the 1AA playoffs.

North (8-4) was stopped on a fourth-and-goal play from the Polk County 2-yard line with 2:27 remaining.

The game turned around on a 92-yard kickoff return for a touchdown by Polk County running back Elijah Sutton with 31 seconds left in the first half.  North held a 22-9 lead when Jacob Young kicked off, and he often puts kickoffs in the end zone. But it was a much chillier night than previous Fridays. Sutton fielded the kick at his 8-yard-line, and changed everything.

North got off to a tremendous start. Jaleel Webster went 65 yards with a Willis Mitchell swing pass for a 7-0 lead.

Polk (8-4) drove to the North 3 late in the first quarter before getting a motion penalty on fourth-and-1.  Luis Hernandez kicked a 25-yard field goal to cut North’s advantage to 13-3.

North recovered a fumble at the Polk County 8 to set up an easy score. Mitchell threw a 4-yard scoring pass to Quintous Smith Jr, and North led 19-3 with 8:25 left in the half.

North muffed a punt to give Polk County some life, and the Wolverines took advantage. A 54-yard scoring drive made it 19-9, but North stopped the 2-point conversion try with 3:23 remaining in the half.

But on the ensuing kickoff,  Sutton went to the house with his momentum-changing return. Hernandez’s PAT cut North’s lead to 22-16 at the break.

In the final minute of the third quarter, Polk County went to the air for a 47-yard touchdown pass from Avery Edwards to Markell Lipscomb, and North trailed, 30-22.

Polk County plays at No. 1 seed Mount Airy next week.

GASTONIA  — In a 3A first-round game, 13th-seeded West Rowan scored first at No. 4 seed Hunter Huss and got within 17-14 late in the third quarter, but the Huss Huskies pulled away to win, 34-14.

West had won at least one playoff game in each of the last three seasons. The last first-round loss for the Falcons was at South Point in 2013.

“We were able to wear them down,” Huss coach Jamar McKoy said. “The defense played tremendous the whole game. We hang our hat on our defense and they came up big again.”

West broke on top when Huss lost a fumble at the Huss 35, and Martavio Rankin finished a short drive with a 6-yard scoring run. Fredrico Cruz added the PAT, and West led, 7-0.

Huss responded with the next 17 points before the break. QB Zo Wallace had a 2-yard scoring run, Trevor Hargett kicked a 29-yard field goal, and Wallace threw a 57-yard scoring strike to Davis just 20 seconds before halftime.

West shrugged off that potential dagger and fought back in the third quarter. After the Huskies (8-4) lost another fumble at the Huss 30, the Falcons made the short field pay off. Again, Rankin got the TD, this time from the 4-yard line. Cruz’s kick cut the Huss lead to 17-14 with 3:57 left in the third quarter.

But the fourth quarter was all Huss. Hargett kicked another field goal before Crawford Chandler’s 6-yard scoring run (following a West fumble) pushed the home team’s lead to 27-14.

After an interception by Dondre Burris gave Huss the ball at the West 41, Huss tacked on another TD on a run by Isaiah Brown.

Huss will play at home against Weddington next.